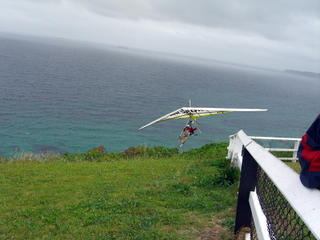 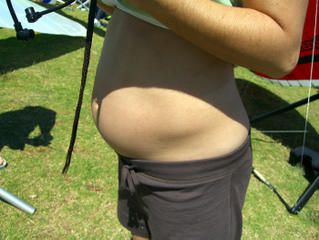 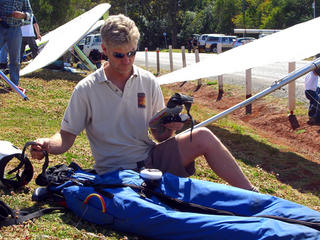 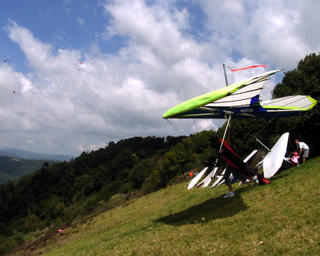 Corinna and I arrived today in Munich after a loooooong flight around the planet. We drove from Newcastle to Sydney yesterday with Stuie and then flew from there to Kuala Lumpur (9 hours) and then on to Vienna (11 hours) and then to Munich (1 hour). I will fly back to Orlando tomorrow after a bit of catchup on my sleep in Munich. It has been a lovely trip and I am happy to have made a lot of great new friends that I will hopefully see again very soon.

I got to finally meet Tony Barton at Newcastle. He is a great American pilot who has lived in Australia now for quite a few years. He was a well-known comp pilot but he stopped competing right about the time I started, so I hadn't met him before. He does tandems on the beach all day long with a nice little landing on top in an incredibly small spot - I wouldn't be attempting that anytime soon. I also got a tour of the Airborne factory from Scott - very tidy and organized place and everyone is super friendly! We started talking about it over lunch and I realized that there are very few hang gliding factories that I haven't visited....really just Aeros in Keiv and maybe one or two other small ones. I guess I might have to make that my mission....to see them all.

We were able to spend a few hours in Sydney yesterday and shopped at the Paddington Market. It's a great outdoor market with jewerly and arts and crafts. Stuie is a great shopper and put up with us speeding around the market looking for a hat for Corinna. Of course, we were having such fun that we lost track of time and found ourselves speeding to the airport and nearly missing our flight.

Leaving Canungra was very very sad, but I did get to fly again on the last day, thanks to Jonny. He is the best host and took me to Mt. Tamborine for a quick flight. Although both Jonny and Lee warned me not to leave the mountain too low, I was a bad girl and found myself on that big floater in a headwind that had me not quite making the landing paddock. Lucky for me I found a little something that took me up again. I'm really enjoying flying these floaters around....they are so easy!

Here are a couple of random pictures - me launching at Beechmont, Tony spot landing, Jon Sr. (the only one I could understand on the radio thanks to his lovely American accent :-) and Kath Kelly and her big new belly (she's due in February, so she'll be ready to fly again for the Women's worlds in May and we'll get to see her and Lee and the new little guy then!)
at 2:58 AM 2 comments: 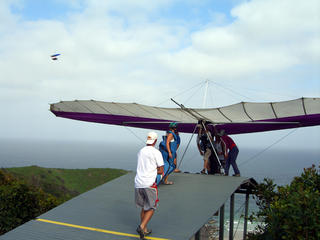 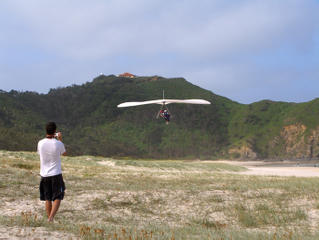 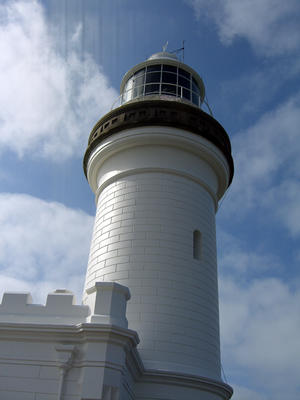 Corinna decided to head down to Sydney a bit early to arrange our tickets back home and visit with friends. We took her to the airport and then promptly spent all of Jonny's prize money....no, not on anything fun, but on new tires for Jonny's car. Today we had a nice little drive down to Byron Bay. The town reminds me very much of Santa Cruz....kind of earthy and full of hippies and vegetarian food. We met up with Curt and watched him do a few tandems in the 25 mph wind. It looks like a fun place to fly when there is a little less wind.
at 8:21 PM No comments: 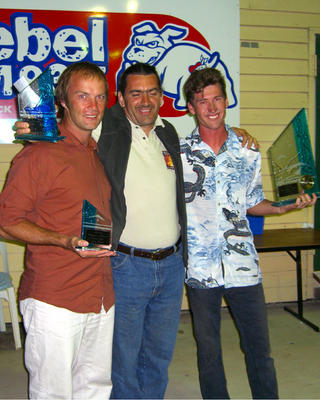 The competition ended just as expected....Jonny won! But, it was a close race right up to the last day when Jonny went in with just a few points over Dave Sieb in 2nd and Atilla in 3rd. The last day turned out to be difficult and rather turbulent. Dave and Attila both went down very early and only Jonny and another Aussie pilot ended up making goal. This is the 5th year in a row that Jonny has won the Canungra Classic. Being the superstitious dork that he is, he probably wont want win it next year....we'll see :-)
at 7:15 PM 2 comments: 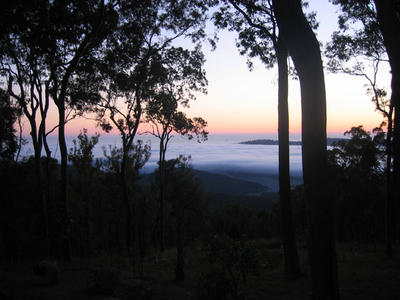 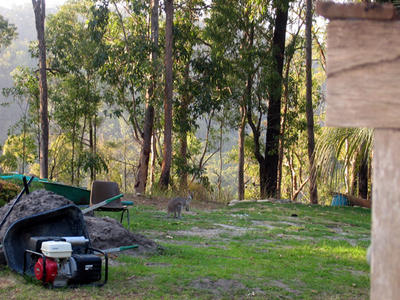 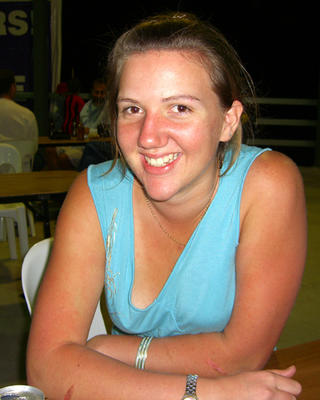 The Durands have been the most wonderful hosts here. Judy cooks awesome veggie food every night and we all sit around the table telling funny stories and making fun of each other....feels very much like home. I start to like it so much here that I may just stay forever :-) Corinna convinced Jon and Judy that they should adopt both of us...I have the right first name already, so I would fit right in with Jon, Judy, Josh, Jonny and Gemma.

I haven't been up early since the comp ended, but Judy got these great shots this morning of the view from the deck and a kangaroo munching on grass in the front yard. I've decided it's worth dealing with the snakes (which I haven't even had to do) in exchange for all the other cool wildlife around here. I am starting to spot kangaroos all the time now and I even saw 4 baby crocodiles while chasing Jonny to goal on the last day....ok, they weren't really crocodiles, but they were some of the biggest lizards I have ever seen!!

The young girl in the picture is the lovely Gemma. What a sweetheart she is!
at 9:25 AM 4 comments: