We're Trying Out Some New Things Here at Quest... 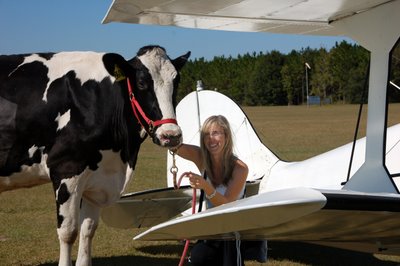 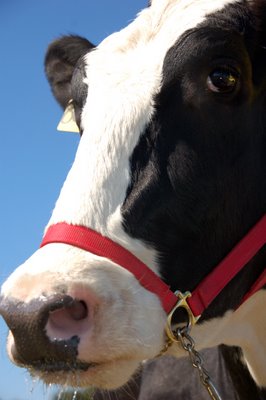 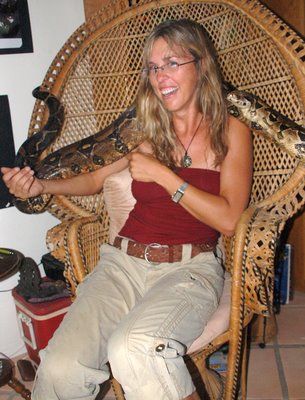 I thought maybe I could cure my snake phobia. Nope, didn't work. That is NOT a happy smile on my face.
at 9:57 AM 1 comment: 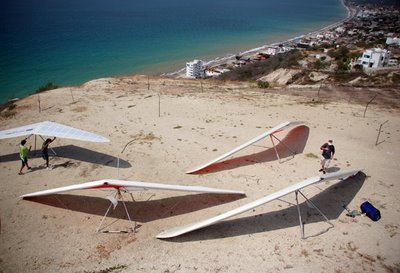 This is another gorgeous beach soaring site a few hours south of Canoa. We stopped along the way to Raul's beach house, but unfortunately the wind was about 75 degrees cross so it didn't make for ideal launching conditions :-( It sure had a nice set up area though. It's hard to see, but there is this barbed wire everywhere to prevent PGs from laying out their gliders and launching (it was a private site for hang gliders only...he he he).
at 4:56 PM 1 comment:

And the Winner Isssssssss...... 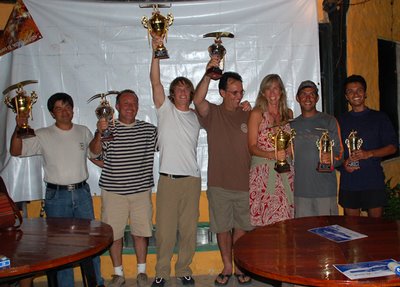 I Think I Feel Something in my Head! 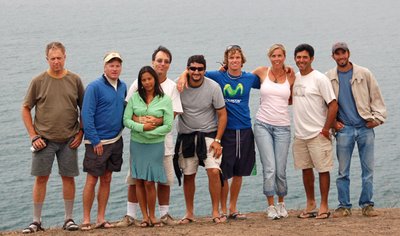 Here's a final shot of the whole gang. Left to right is Scott, Jack, Sharon, Mike, Michael, Dusty, Me, Raul and Eduardo
at 4:47 PM No comments: 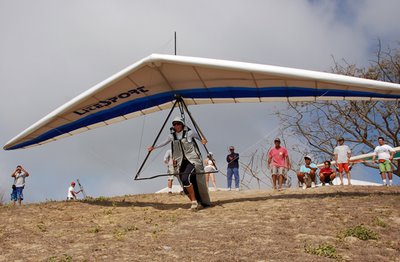 We're here in the foothills of the Andes completely socked in and hoping for a clearing soon. I'm trying to stay warm and dry in the car and thought I would post an update.

It was a sad day leaving Canoa. So many new friends and flying experiences. Leaving is my least favorite thing. The competition went off beautifully with three perfect task days. Dustin smoked everyone winning all three days. Mike Glennon and Raul were close on his tail in 2nd and 3rd. I was very pleased with my Litesport finishing in 5th overall. They gave me a gigantic trophy for being the top placing female (out of 2). I was just happy to beat a few Talons and T2s ;-)

Halfway between Canoa and Guyaquil is Raul's beach house in San Jose were we had a short stopover on the way home. We had hoped to fly there too, but conditions prevented it this time. Of course we were treated like royalty there, just like everywhere we've been in Ecuador. I am forever endebted to Raul and Mike for being the most generous hosts I could dream of. We also had a sweetheart crew consistng of student pilots (Michael and Eduardo) who made sure our equipment made it there and back without any problems! These guys are the best!!!

Mike has invited Dustin, Jack and me to Cali, Colombia for a flying tour in January! I can't wait. I'm in love with South America where the pilots are the kindest most generous people I've met anywhere.

Well, all this babbling and still no clearing :-( Only 100 meters down the hill and we would be below the clouds and in the clear to launch....but no launches down lower.....boo hoo.
at 3:04 PM 1 comment: 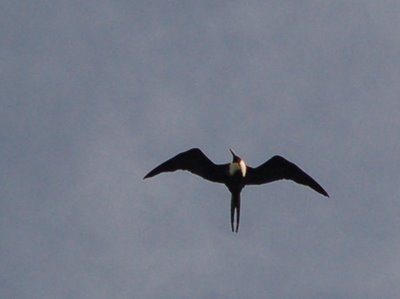 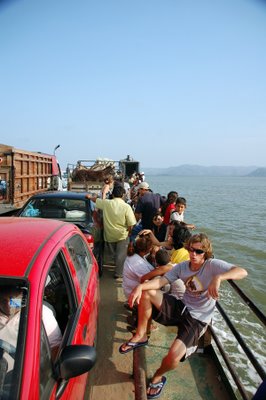 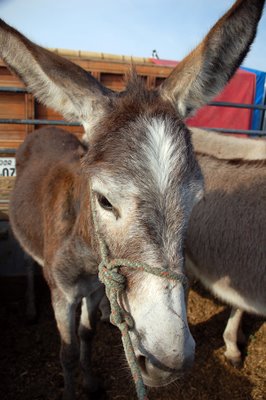 There is a ferry boat along the coast here that cuts across a waterway and saves about 2 or 3 hours on the drive from Guayaquil to Canoa. We arrived and found a line of enough cars that it meant we would be catching the ferry on its third trip. No one was happy about waiting 2 hours, so Raul found three cars near the front of the line that were willing to trade their places in line for ours (for a fee). Seemed like a great idea at the time, but it didn´t exactly work out the way we planned. Some of those further back in the line didn´t like the idea so much and complained to the port authorities. After fighting endlessly with them, the police, the mayor and possibly even the president of Ecuador, they simply decided not to let us on the ferry at all. Oops! $80 down the drain :-/ Well eventually Raul and Mike worked some magic on them and we were driving onto the ferry, in the very position we would have been in had we just waited in line. All we could do was laugh.
at 10:14 AM No comments: 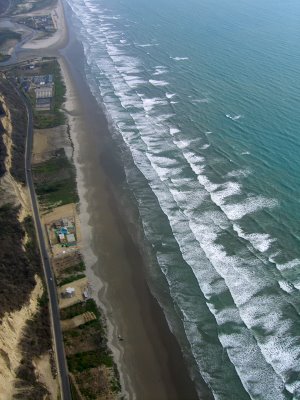 Yesterday was the first day of the ridge race here at Canoe Beach. What an amazing site!!! There are about 40 or so competitors, most in the sport class. Just 11 in the open class. The ridge we race on goes on forever. I don´t know exactly how far you could go in either direction, but yesterday´s task was 46km and that was twice to the south and back. Conditions were perfect for flying although the launch is a bit on the rough side. We had a single start at half past four after having to dodge the clouds at a 600 meter base. Here is a shot just before heading down to the edge of the start circle. The beach is gorgeous, very wide and landable most anywhere along the course.
at 10:03 AM No comments:

My father likes to tell that when I was a kid he would say "Jamie do you want to go?" and I would say sure and not even ask where we were going until we were in the car on the way. So, I guess nothing has changed ;-). Dustin called me a week ago and said hey, come to Ecuador with us! Without thinking twice, I had a ticket to Guayaquil. I didn't learn much about where we were going or what we were doing until we were on the plane crossing over Cuba.

We've been here now for three days, staying in Guayaquil for a few days of local flying. Raul Gurerra is the key player in the Guayaquil hang gliding scene. There aren't many pilots in the area, but Raul is the main (maybe only) instructor and he is doing quite a lot to try to grow the sport. They have a small group of pilots (probably 8 or 10) and an Airborne trike that they use to tow out of small airstrip on th edge of the city of about 3 million people. Also, just 2 weeks ago, they were able to secure a foot launch site very near the airstrip and bulldozed and nice little patch to land on below. The launch is low (about 200 meters) so you really just get one shot at it. But it is a fairly consistent site and if you can get up a little you can bench up to the higher hills behind and have a great view of the city. We flew there two days in very very light conditions which I totally love because it is perfect for me and my Litesport. Many of the flights were no more than 15 or 20 minutes of scratching. But yesterday, after bombing out 3 times in a row Dusty managed to kick all of our asses and get up and back on the high hills. Finally he was happy!

Now we are on the road driving to Canoa Beach for the ridge racing competition. Everyone tells me it is a beautiful beach site with a 30something kilometer ridge you can cruise up and down all day. They've held this comp for several years now - Kevin won last year, Betinho the year before and Raul the year before that. Dustin is determined to win it this year ;-). It isn't a huge comp (yet) but they are hoping to draw more a more pilots every year. This year we are 4 from the US, there are a few from Peru, a few from Colombia and of course the Ecuadorians.

I couldn't be having a better time - my favorite south/central Americans are here, Raul and Mike Glennon who I met many years ago at Wallaby Ranch and have loved seeing every year at the Florida and Texas meets. They are incredible hosts and when I told them I felt like a princess here they said "No way! You're the queen!". Its fun to be a girl in hang gliding ;-))
Sent via BlackBerry