Fantastic last task today.  It all started with a bit of grumbling over the task setting.  The committee decided to have predetermined stop at 4:30 for safety reasons.  The forecast looked identical to yesterday and they were quite sure it would overdevelop as it did yesterday.  About the half the pilots felt like there was no reason to stop it in advance of knowing whether or not the forecast would really pan out.  They took a vote at the briefing - which was pretty much split down the middle - and then decided to let the safety committee make the decision.  In the end, they decided not to stop it in advance.

But, with the expectation of overdevelopment, they called a shortish (for Forbes) task to the south and then east, thinking that most would take the first start.  Most did, but not all.  Atilla hung back and took the second start.  Jonny apparently wanted to wait (as he wasn't able to leave the start circle right on time), but worried about the forecast storms and went on ahead with most everyone.

All the drivers sped to goal and watched the sky for storms and for the coming leaders.  Blenky, Jonny and Atilla were the first three in (I think in that order), but with Atilla taking the second start and the others on the first.  We watched several pilots come in over the next 15 minutes wondering what might have happened to Zac in first place.  After 16 minutes, with probably 15 pilots between him and the first in, Zac finally made it - together with Gordon (in second place overall and Jonas in third).  It was a nail biter for everyone at goal - and probably for those watching the trackers from abroad.   In the end there were probably 35 at goal.  And, by the way, the overdevelopment never reached us.

We're getting read to go to the prize giving in the next half hour and still don't know for sure who will win.  The speculation at goal was that Atilla will steal most of the big points with the day win and Jonny won't get enough in second to overtake Zac (and probably not Gordon or Jonas either).  But, it will be interesting to see how it all comes out. 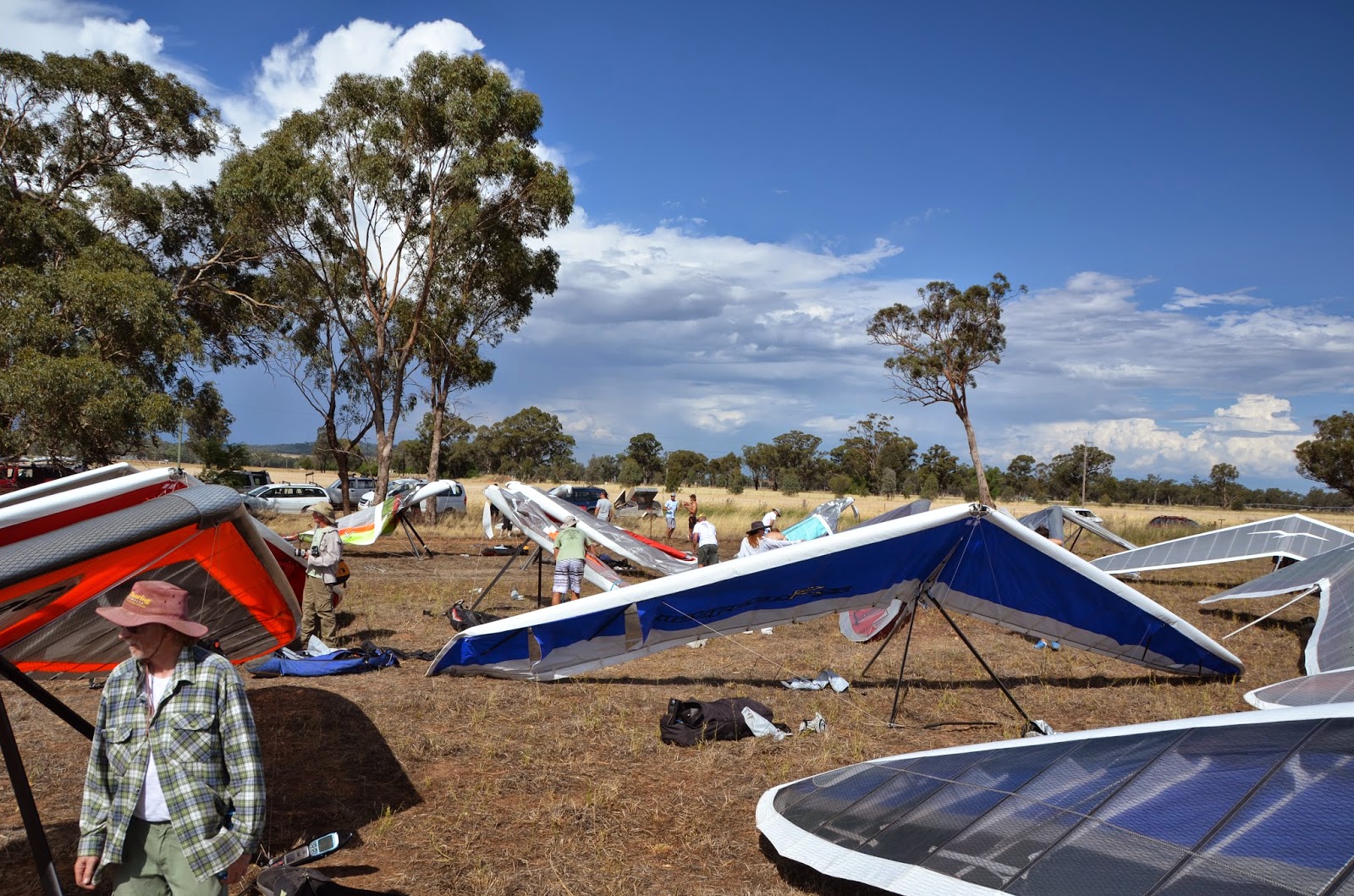 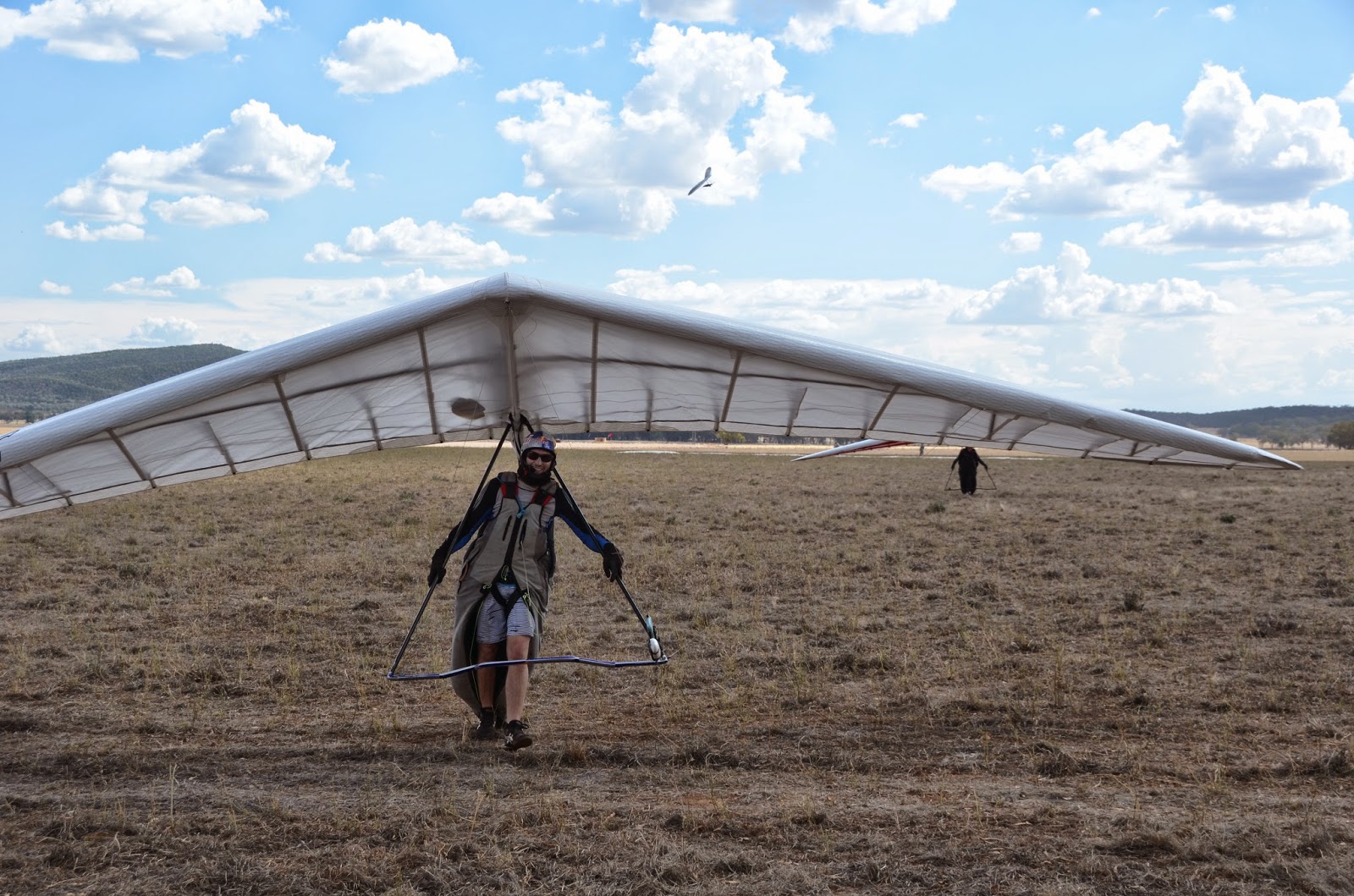 The task committee originally called a triangle to the north with the first let into the wind.  Not everyone necessarily understood that, but it didn't matter because out at the tow paddock the north wind was stronger than expected and they quickly realized a task with leg one into a decent wind probably wasn't the best idea.  So, they went with the alternate task - a slight dog leg to the southwest.

Although there was no talk of thunderstorms in the forecast (at least not that I heard), as I got about halfway to goal in the car, I could see a big cell that appeared to be just to the west of goal. 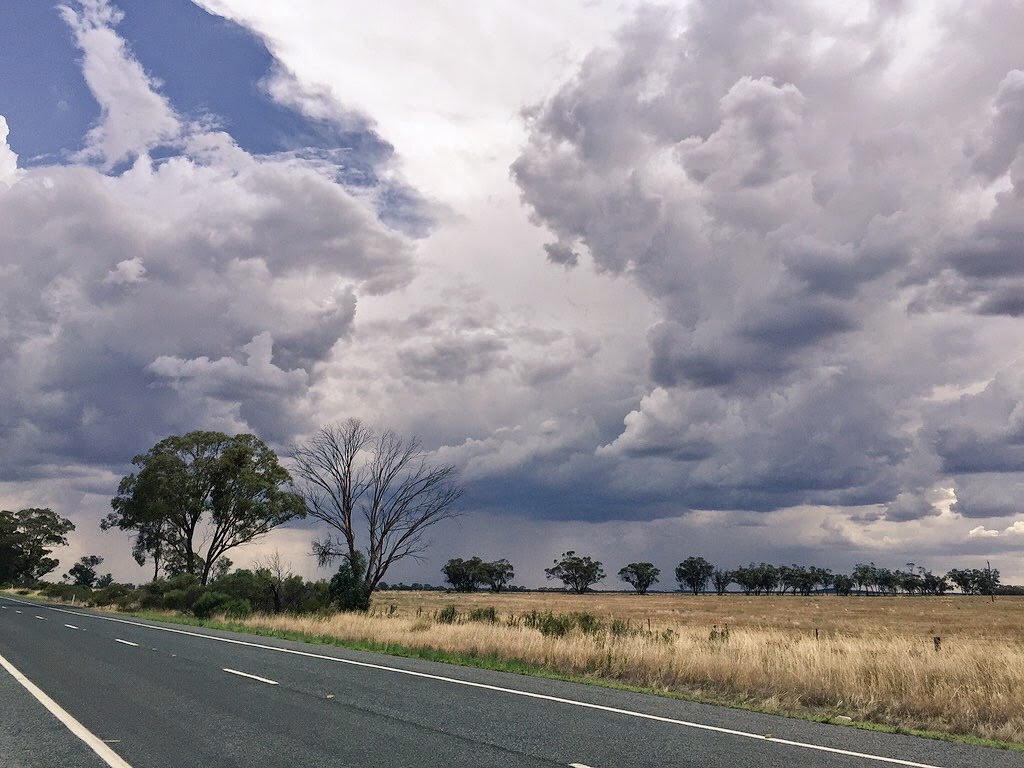 It quickly became quite widespread and I got the text message that the task was stopped.  Many came down and landed near the turn point before the gust front hit.  They were about 2 hours on course and near 100km, so while it won't be a 1000 point day, it should still be reasonable scoring.  It should be very interesting going into the last day - just 2 points between first and second place!!

Looooong task and a long day overall.  They called a 258km task out to the west (toward Hay).  The drive along course line takes you through almost nothing, just lots of Australian outback.  Drivers were warned at the briefing to fuel up anyplace we saw an open station.  It's not unheard of for teams to sleep in their cars after a late retrieve waiting for the gas station to open up in the morning.  That may have been the fate of the team of Christian/Blenky/Glen as their driver arrived at goal with 1/3 a tank of fuel - which wouldn't have been enough to make it back to the nearest fuel at West Waylong (haven't heard yet this morning though).

Anyway, it was a long task time wise.  Most pilots were on course at least 6 hours and even after we packed and left goal we heard that more still came in (around 25 total, I'm guessing).  No scores are up yet, but it looks like Zac will have won the day (that lucky hat is working!) with Jonas, Glen and Jonny very close behind.  Glen and Jonas took the first start, worried that the day would fizzle out early.  They lead most of the way with Jonny catching them from the second start maybe halfway on course.  Gordo also did much of the leading, but off on his own left of courseline, where the others tended to stay right.

Amongst the top ten, Atilla and Trent weren't in goal.  Others in the top ten were slow.  So, standings will change a bit when the scores come out this morning (hopefully soon). 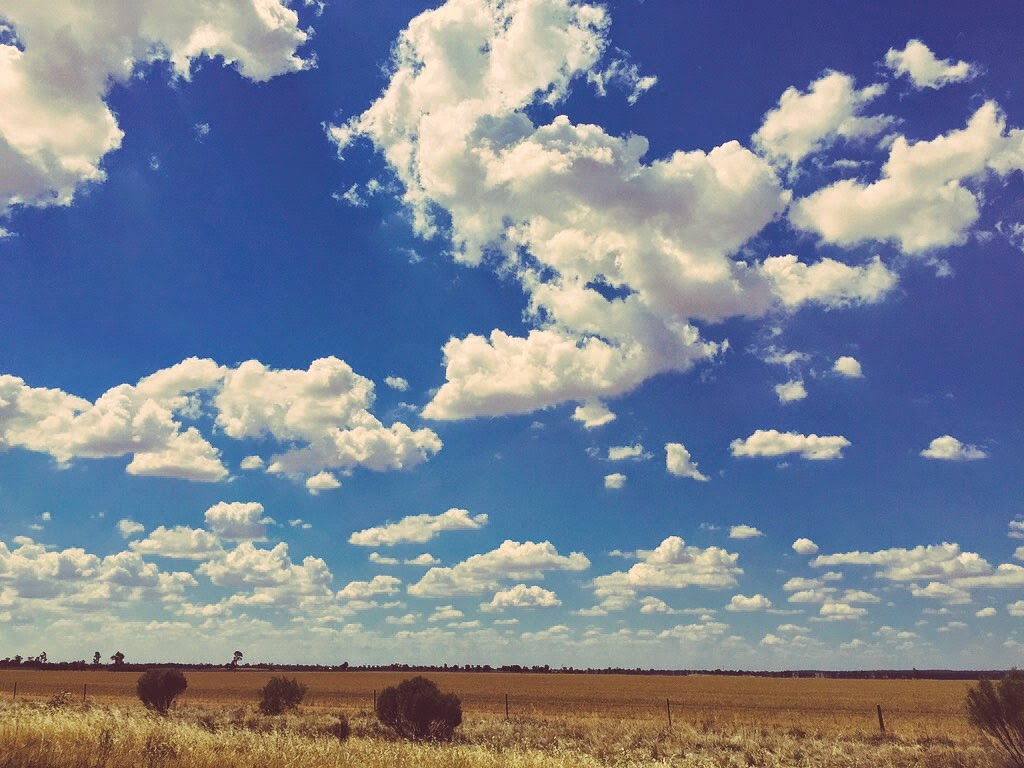 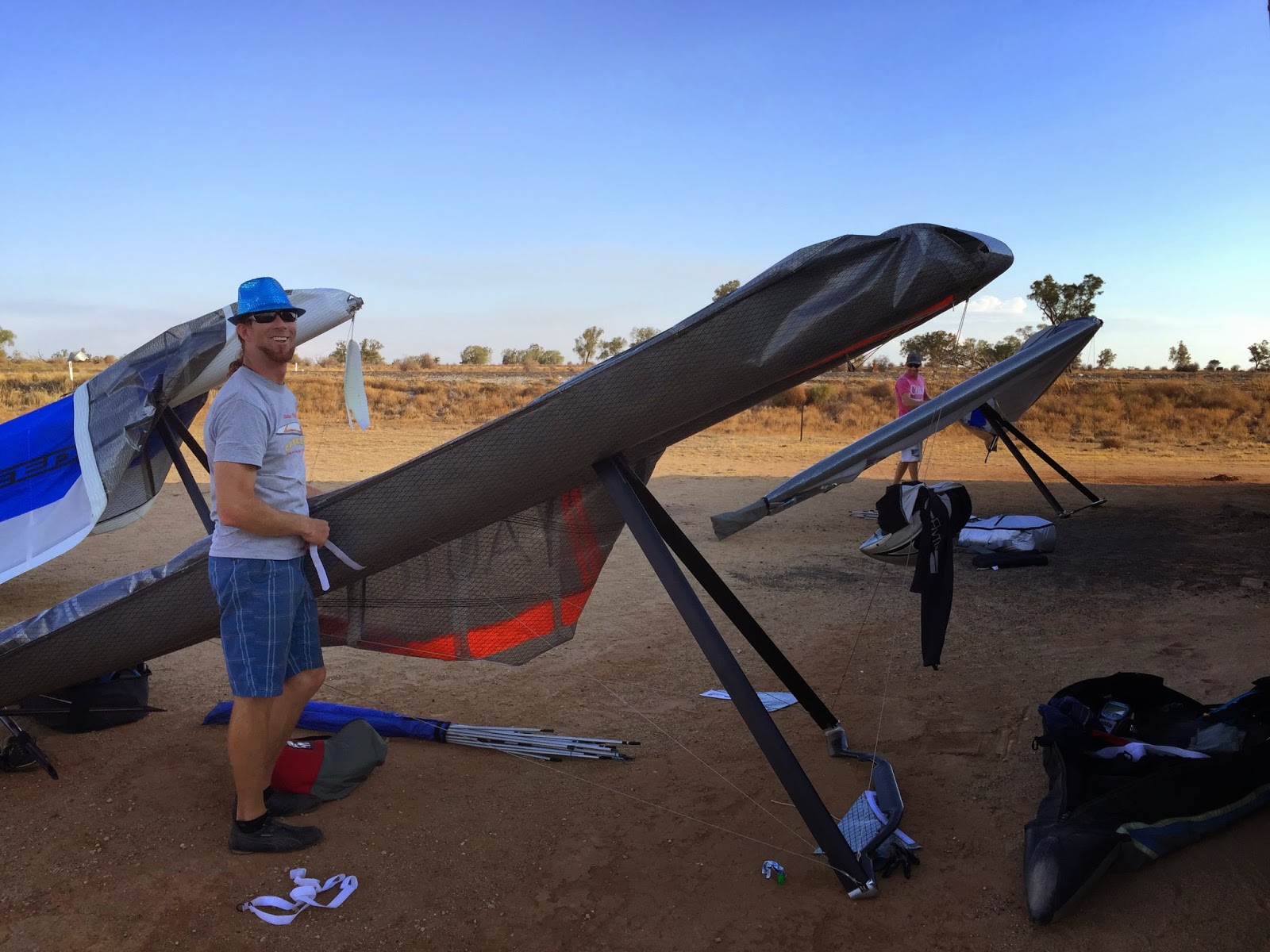 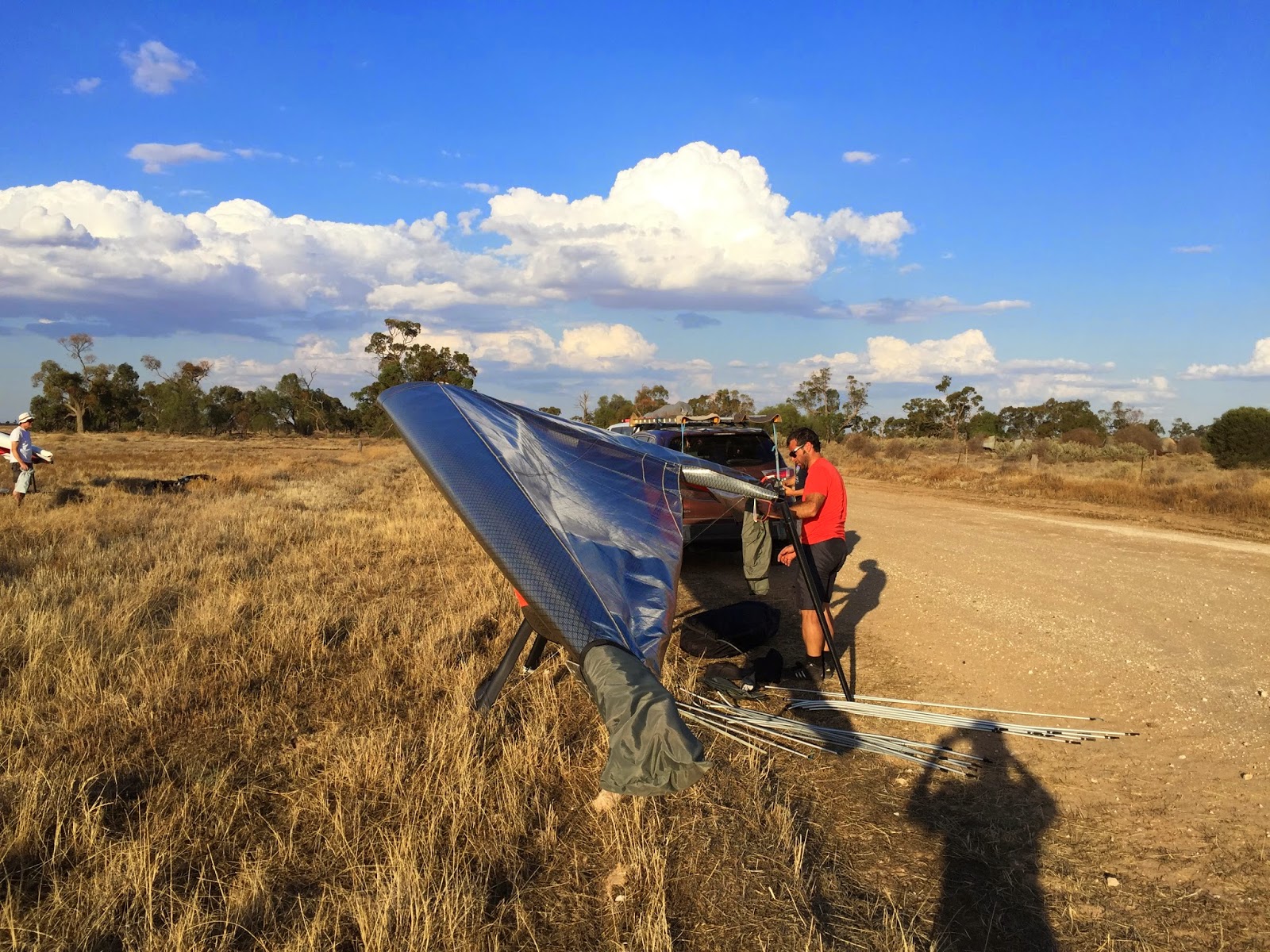 Some Pics from Day 3

Yesterday and today were canned  because of thunderstorms.  All should be back to HOT and normal tomorrow and looks like for the rest of the competition.  Meanwhile, here are a few more pictures.

What a day!! Seriously under-called task, but 40 very happy pilots at goal yesterday.  The cloud streets lined up so perfectly that I couldn't catch them even at 140km/hour on the highway.  It was one of those classic Forbes days and it's just a pity they didn't call a 400km task, because I'm sure it could have been done.  Most were landing during the strongest part of the day and even driving home from goal at 7pm the clouds still looked incredible!  Reminded me of a day a few years ago when we went from Forbes to Hay ;-). 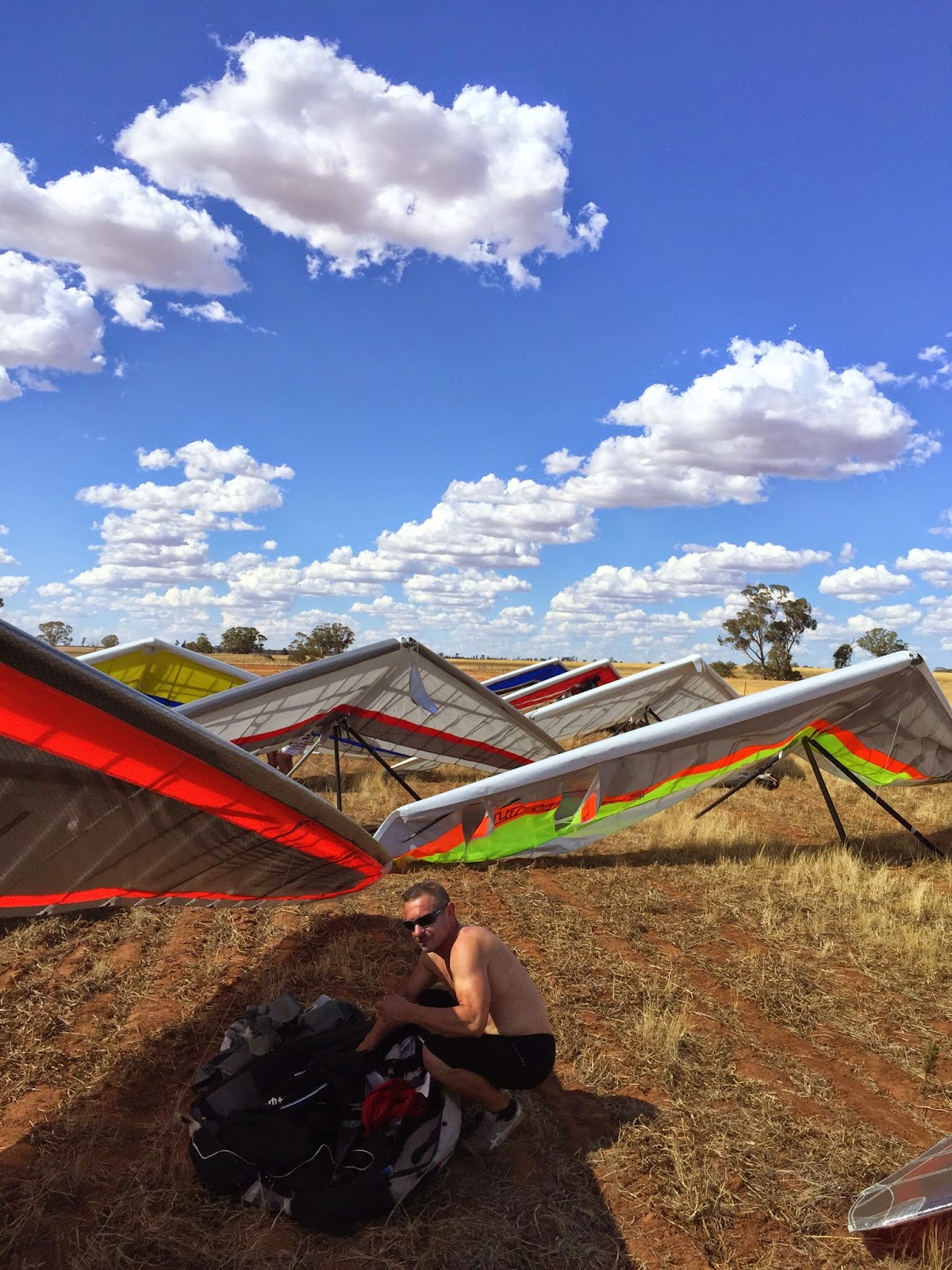 The gust front we drove home through last night was the widest one I have ever seen - I LOVE the exciting weather in Forbes.  It turned the sky (and everything else) a golden brown.  We stopped at one point on a eucalyptus lined road to jump out a get some pictures.  After 2 or 3 minutes outside the car, Tullio shouted over the howling wind "hey, maybe we should get away from these trees", so we started back toward the car and just about then a giant eucalyptus branch came loose and landed just short of Zippy.  With the day win and the narrow miss of the tree branch, we decided Zippy should buy a lottery ticket.

We also heard news driving home that Sasha was unaccounted for.  In the midst of that massive gust front, the whole car was quietly concerned.  Arriving home, we heard no news and even at breakfast, with scores up and no Sasha or Gerolf in them, we worried more.  Thankfully, I heard from Gordo this morning that Sasha had landed safely 25km beyond goal and got her glider flat on the ground about five minutes before the front hit.  She even made the 400 goal cylinder - go Sasha!!!

Speaking of the goal cylinder, they are going with a goal line most days here and the rule is, if there is a line out there when the pilots arrive, it's a goal line finish.  If there is no line (maybe the paddock isn't suitable or something), then goal is a 400 meter cylinder.  Yesterday, Zippy arrived so quickly that Rob didn't have the goal line out yet.  So presumably, goal was the cylinder.  But, Rob put the goal line out just seconds after Zippy landed and that left the rest of the field with a goal line finish.  I can see situations where that could cause a problem.  For instance, if Zippy had gone to the far edge of the 400 meter cylinder and not crossed the line (which wasn't the case yesterday - he flew directly over where the line was later placed) AND they went with the line finish, he wouldn't make goal.  Apparently yesterday, Vicki gave Zippy the choice of taking his time across the cylinder or across the goal line, so it wasn't a problem here.  Zippy chose to have the goal line time and presumably all other pilots making goal get scored when they cross the line.  But, I wonder if Sasha will be scored getting goal or not?  I heard she got the cylinder, but probably not the line. 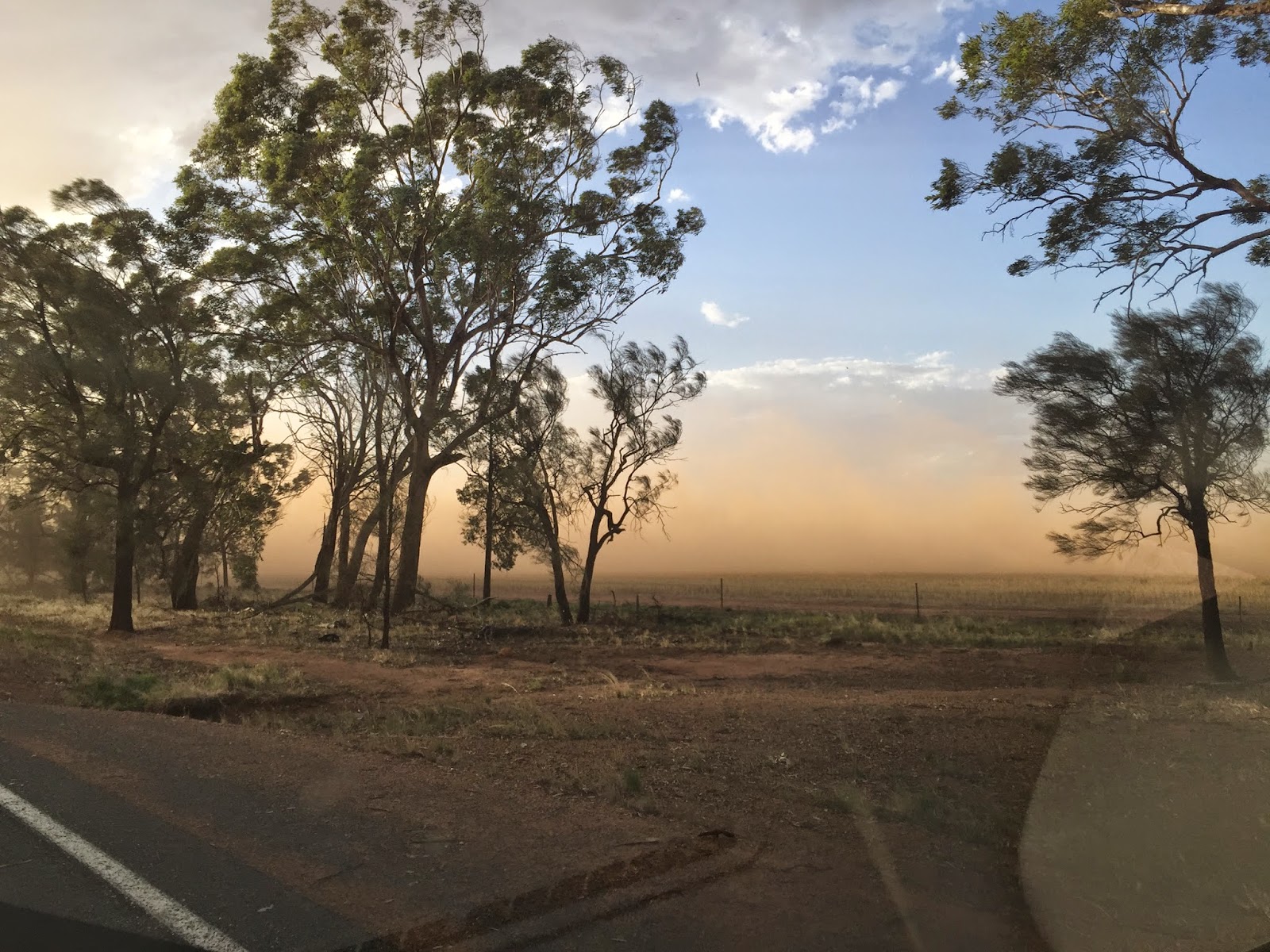 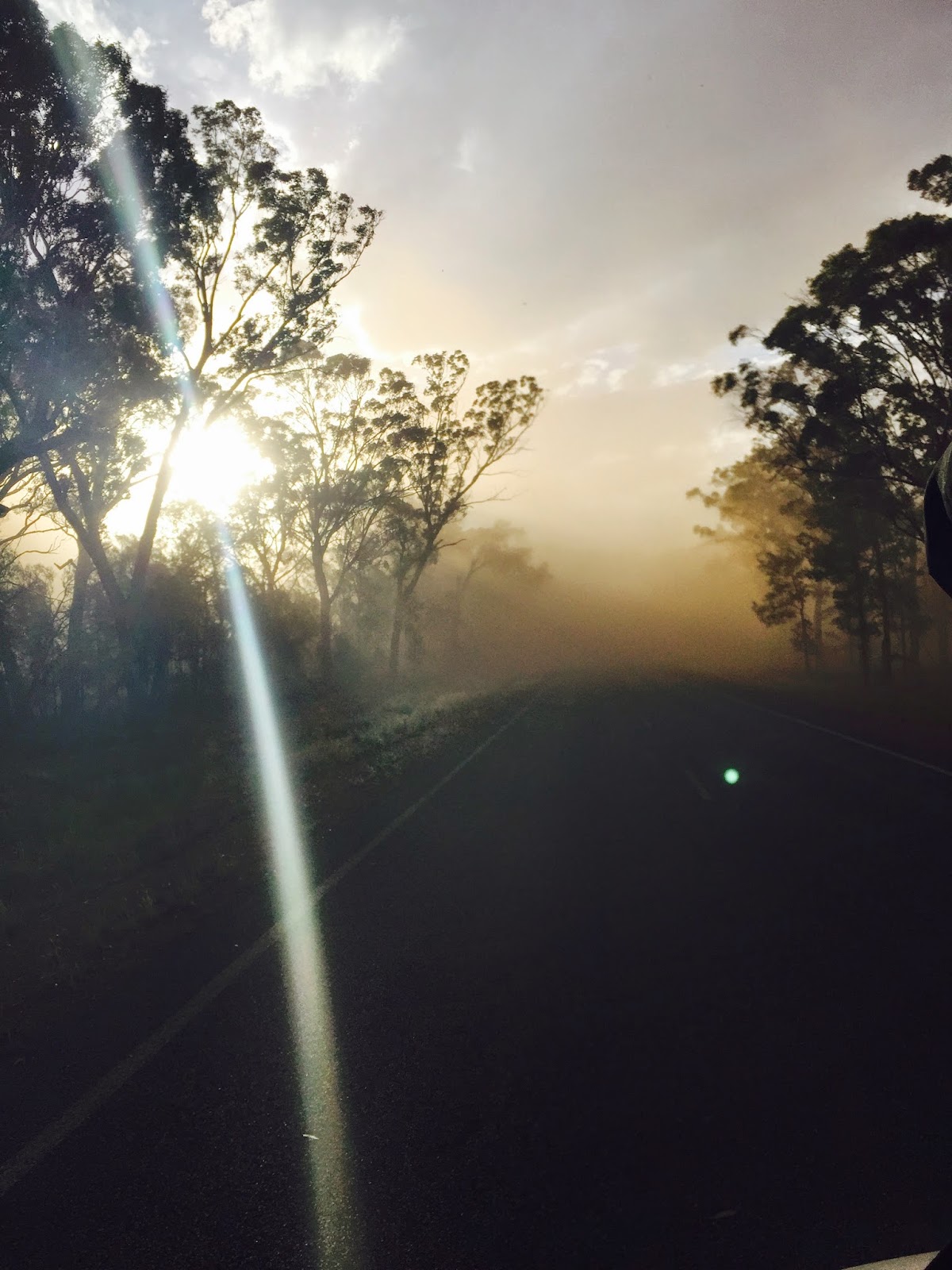 Awesome call on both the weather and the task!  The forecast called for quite a lot of overdevelopment around the area, especially in Forbes by mid-afternoon.  The task committee (Jonny, Atilla and Gerolf) found a narrow corridor to the south (which was very convenient since we had pretty strong north winds) that took them to the only area that didn't look to have any overdevelopment.  The only concern was that the weather was meant to build and follow us south, so there was a chance it would catch us and spoil the day.

Winds in the tow paddock started out fairly strong out of the north and people were running around with wind meters worrying that it might be too strong.  Early readings were around 30km/hour.  It lightened up just a bit by launch open.  By the time everyone was towed up we could see the overdevelopment all around us (except to the south).  When I left Forbes to head to goal, this was chasing me. 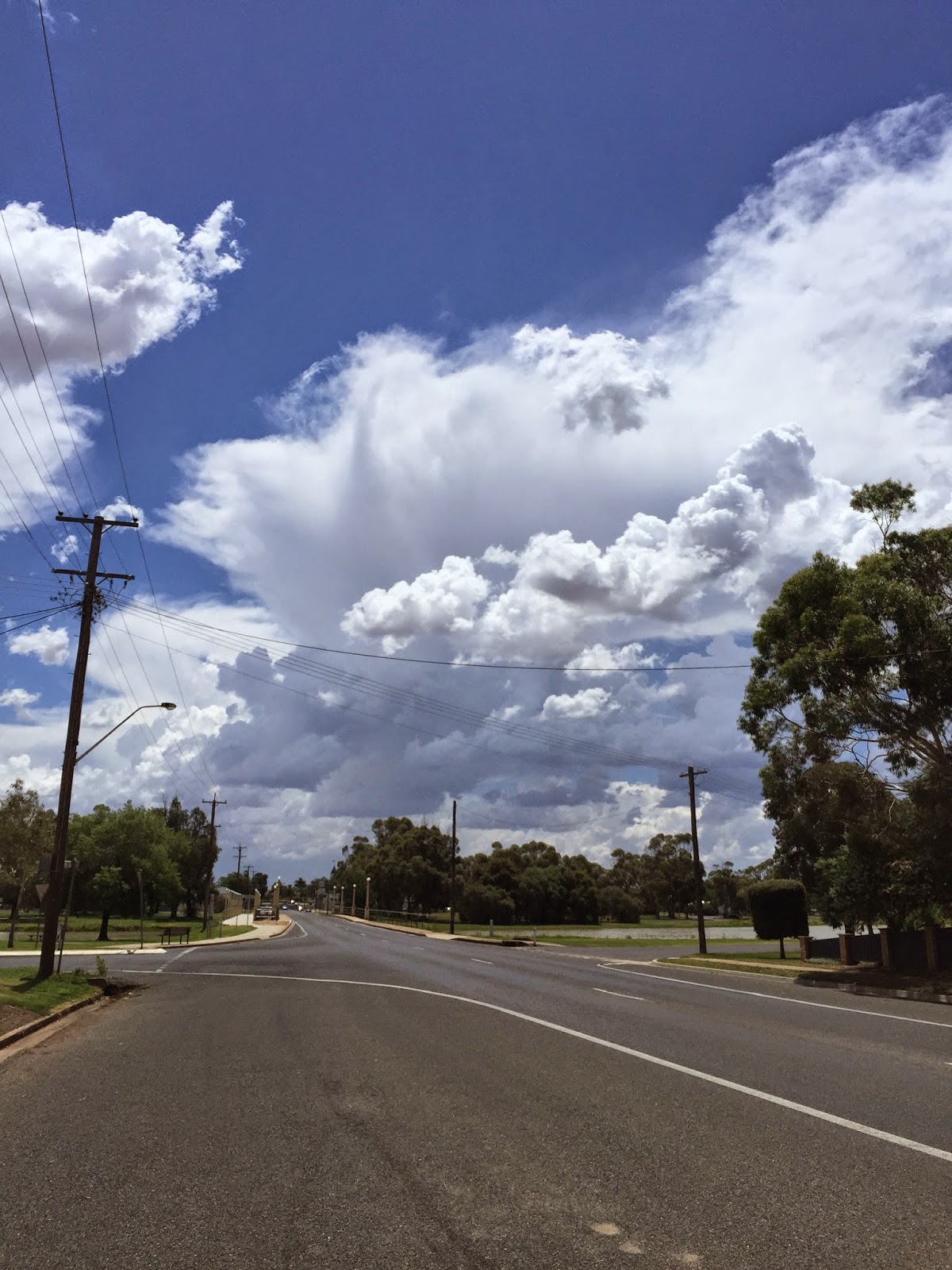 But, out in front, in the direction of goal, the sky was classic and it was clear if they were out in front of the weather, it would be a fantastic day.  The task zig zagged to the south and with the strong tailwind component, they were moving fast!  I arrived at goal watching the first guys with trackers right on my tail, but I couldn't find the goal field - no goal keeper, no line, no nothing.  I thought I was at the wrong coordinates.  Not two minutes before the first glider came in, I found goal keeper Rob.  But, he had just arrived and didn't have time to get the line out before Zac came racing in.  I had watched him on the SPOT page and knew he was making really good time, but I had no idea if any non-tracking competitors were with him.  There were none!  He was completely on his own and it was nearly nine minutes before we saw the next one - Jochen - then another six or seven minutes after him when Gordo came in...three very happy boys!  Eventually two more big gaggles straggled in, but they were 35 minutes or so after Zippy. 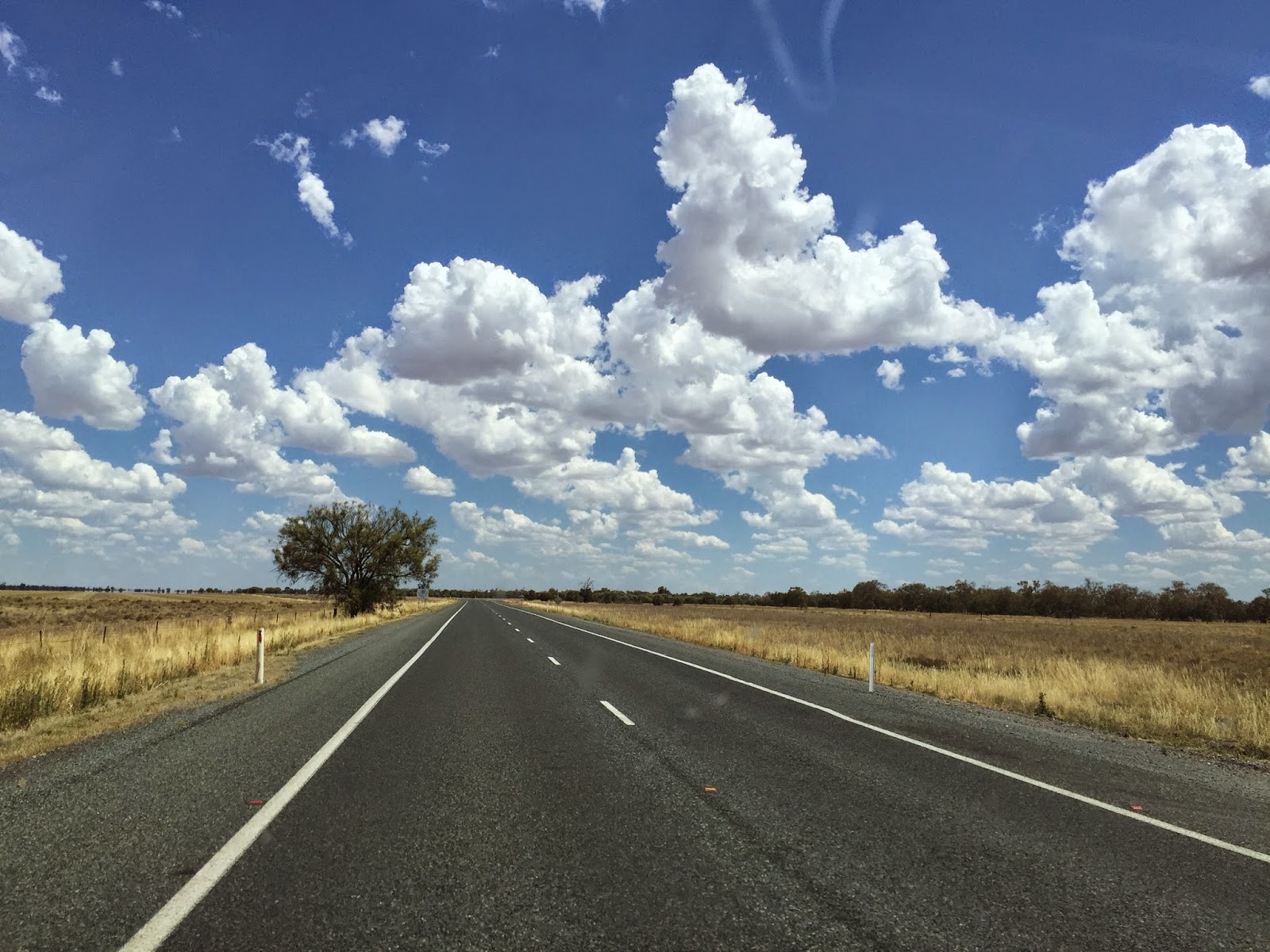 In the end, there were somewhere around 30 in goal - about the same as yesterday.

We passed through a massive gust front on the way back to Forbes...just about the biggest (area-wise) I've ever seen.  Forbes weather is so powerfully cool!! 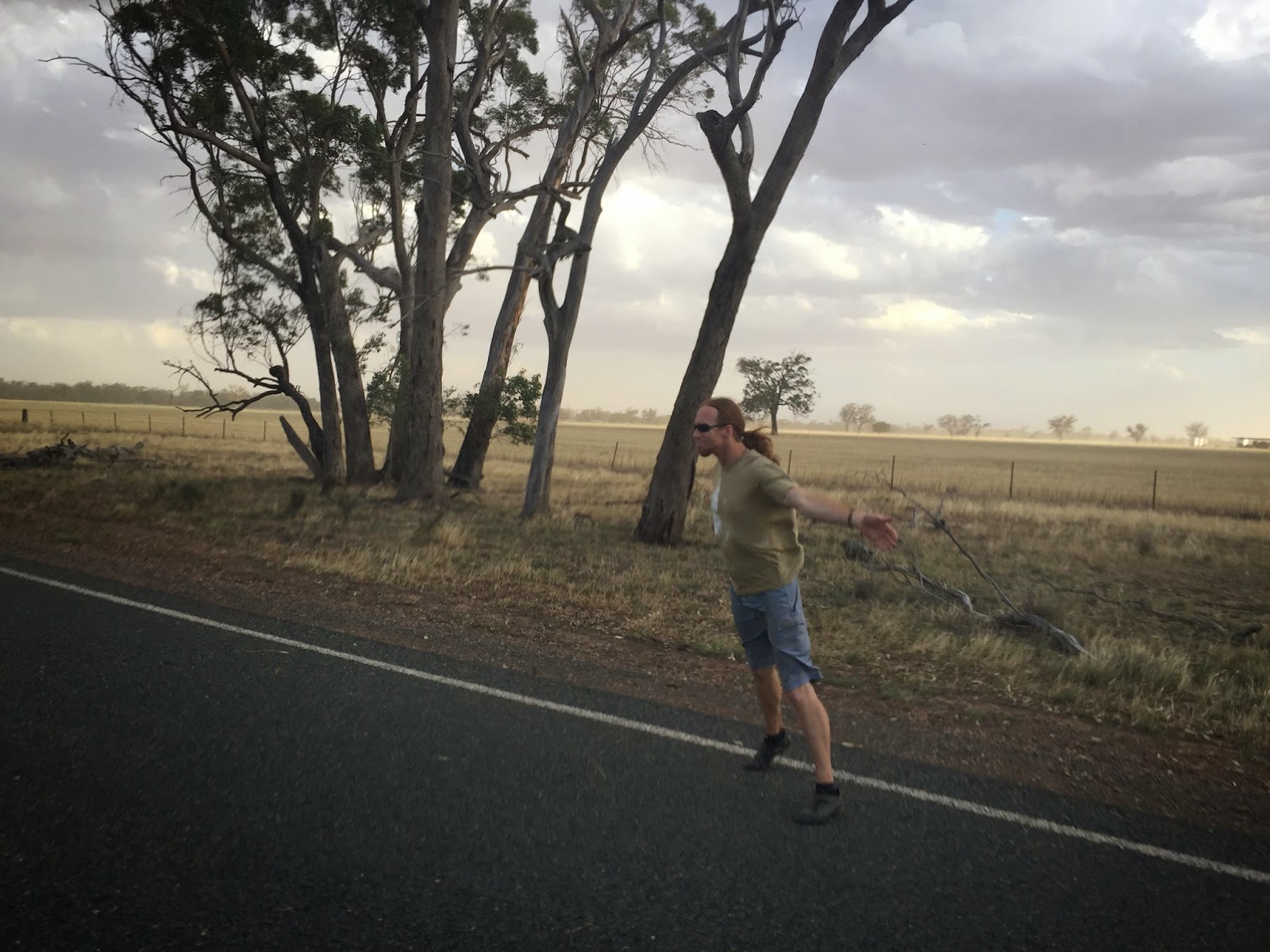 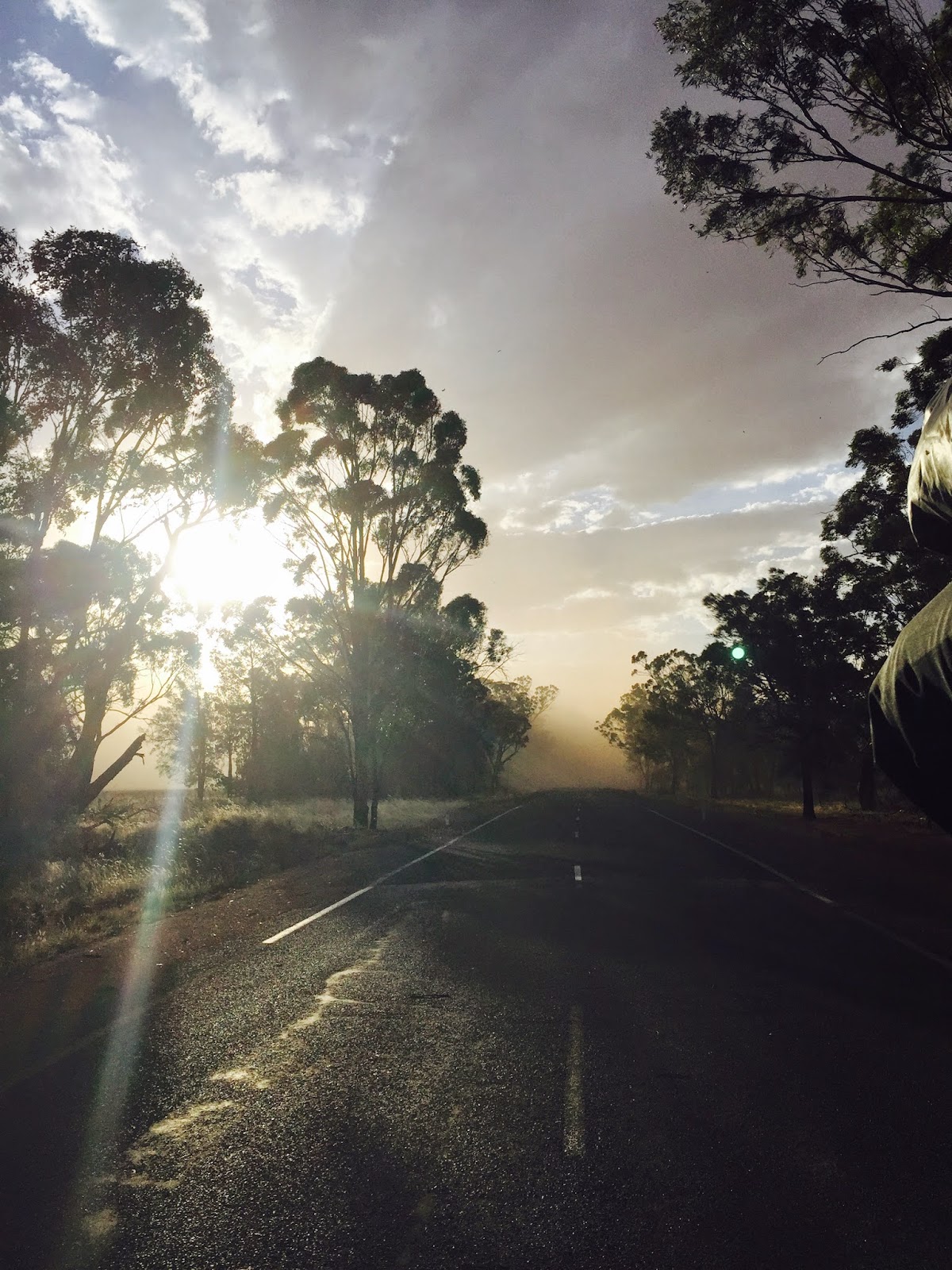 Great way to start off the year!  Nearly half the field made the 144km task to Manilda.

Launch started off a bit on the slow side with the final few competitors launching after the first start clock.  But, everyone got on course fine and for those in goal, I heard of just one that took the first clock.  The first group in (Attila, Olav Opsanger, Gordon and Gerolf - in that order) took the second clock.  Attila commented that those taking the third start were likely faster, but it didn't look like they got in quickly enough, so Atilla will likely win the day.

The altitude limit for hang gliders here in Australia is 10,000ft and it was announced at the briefing this morning that there would be penalties for going above that.   Apparently, many guys were getting there and having to pull out of thermals early - Pippo says that cloudbase between the first and second turn points was definitely above the ceiling.

I've heard that Gerolf and Jonny are doing the weather this time around and it seems they got the forecast and the task call pretty good today. 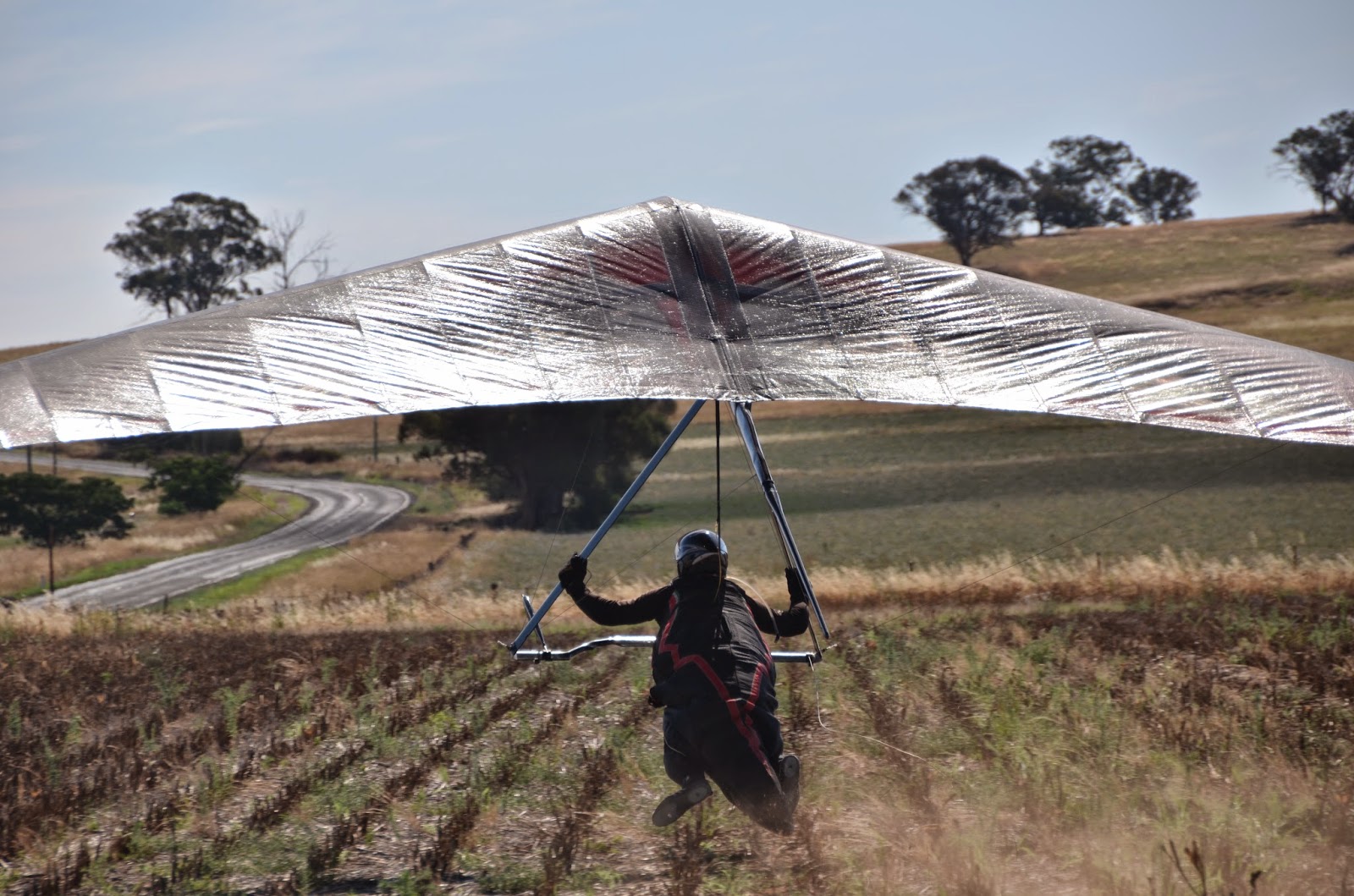 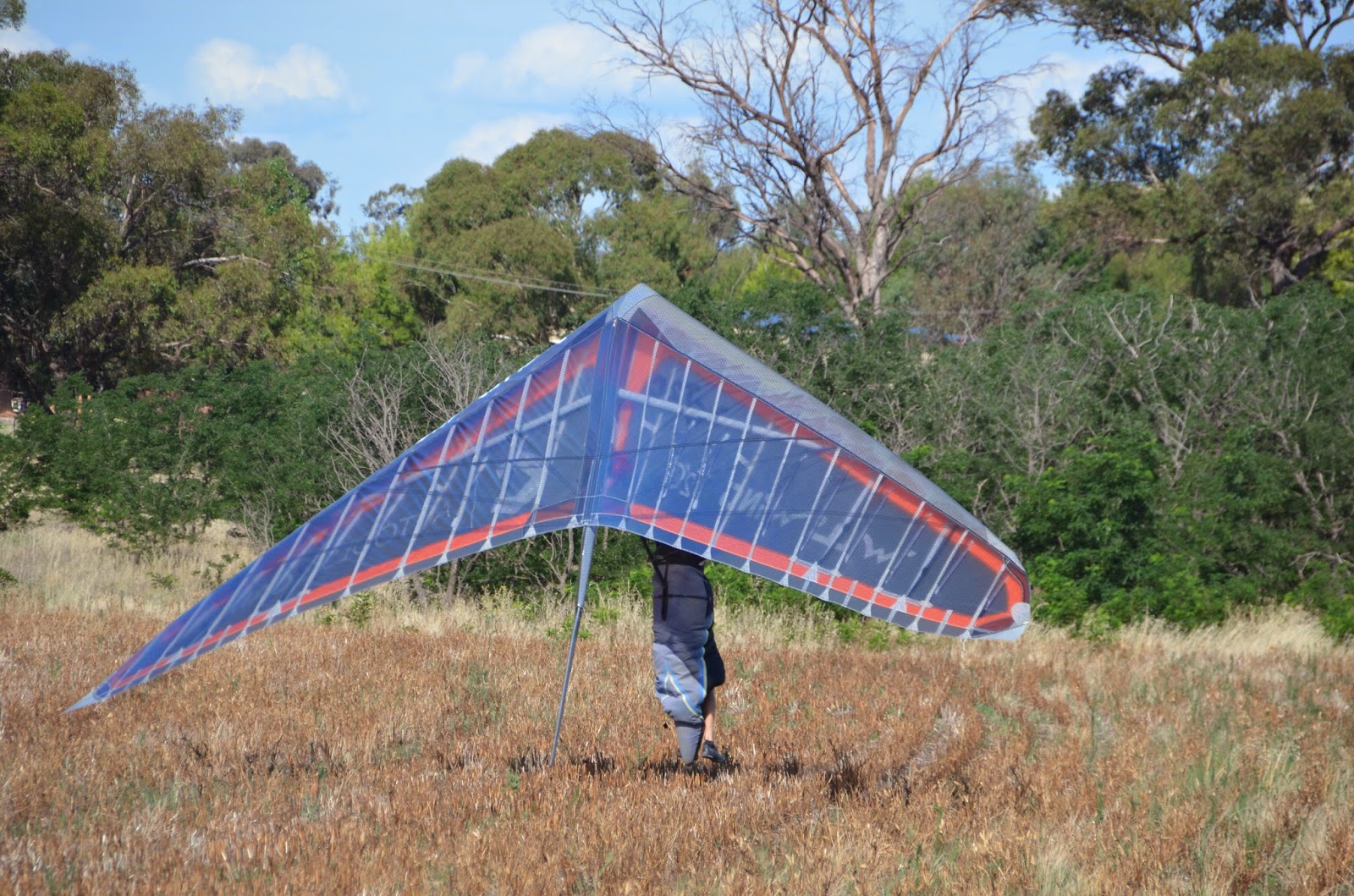 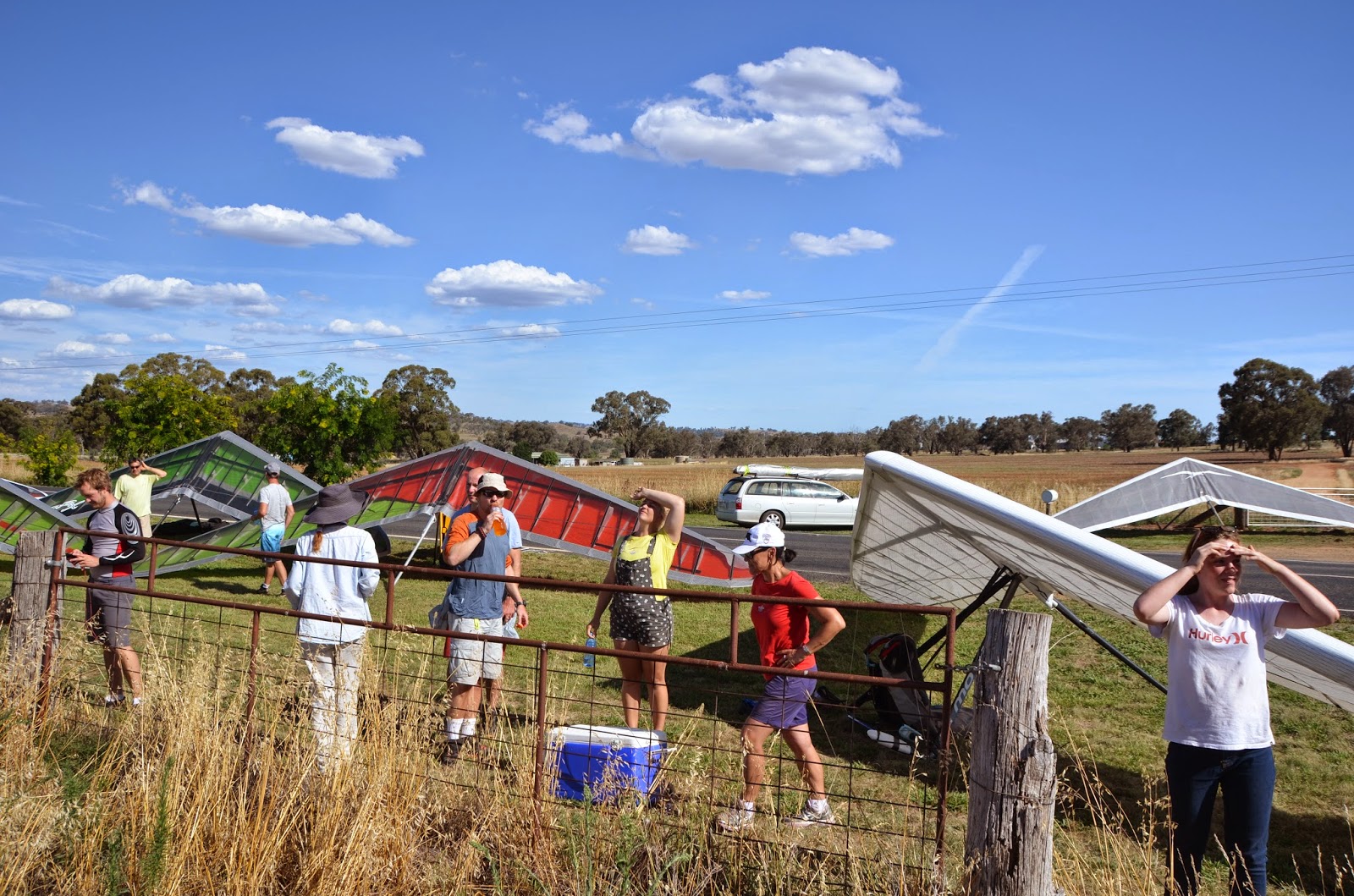