Jonny is flying Gerolf's glider in Valadares this week.  It has a cool sail material on the trailing edge. Moyes is calling it the "Pro-Edge".  It makes me think of a fashionably faded t-shirt material.  It's apparently wrinkle-free and they think it improves high speed performance.  Jonny said they may start putting on the leading edge as well.  I like the look of it! 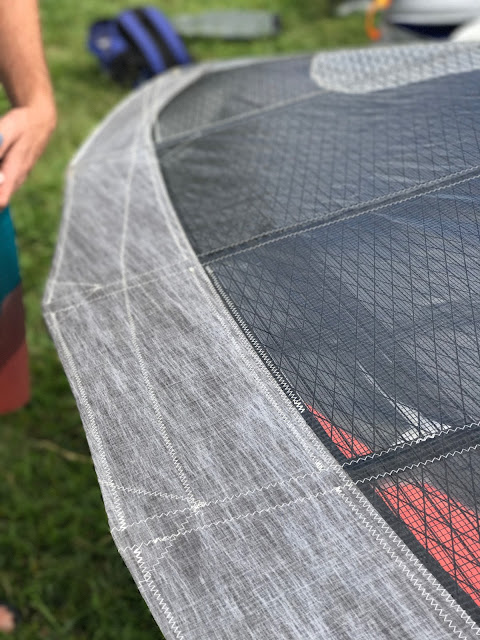 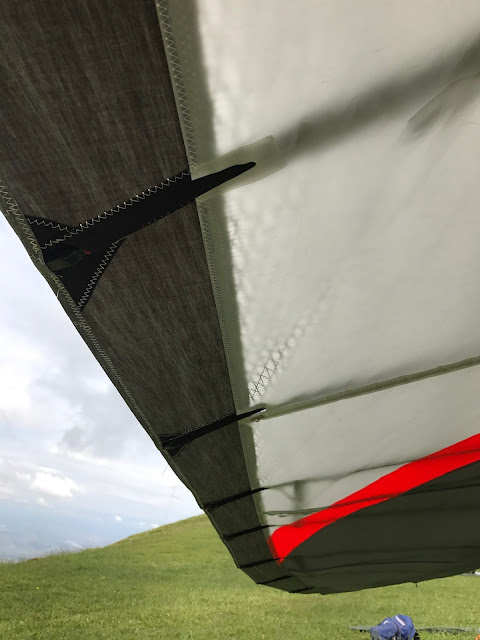 Beautiful day yesterday with a 78km triangle that was probably a bit undercalled.  There were 34 out of 44 in for a great party at goal.  Filippo won the day, which always amazes me considering how little he flies.  He averages about 17 flights a year and they are all in competition - no time for free flying for him. Jonny was just quick enough to take the lead from David. There are just 61 points separating them going into the second to last task. 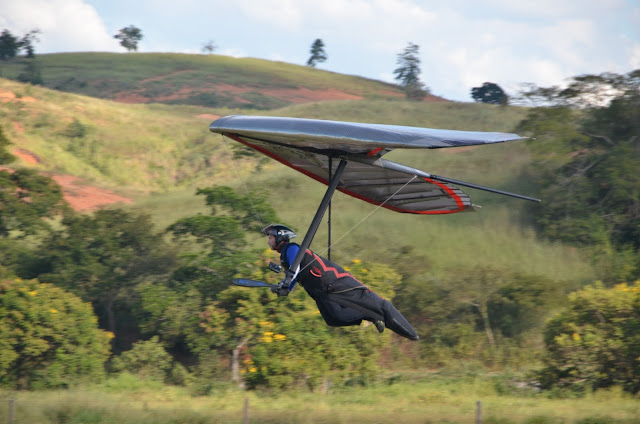 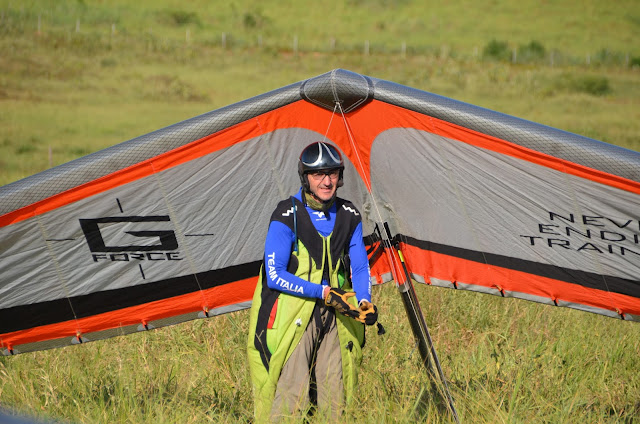 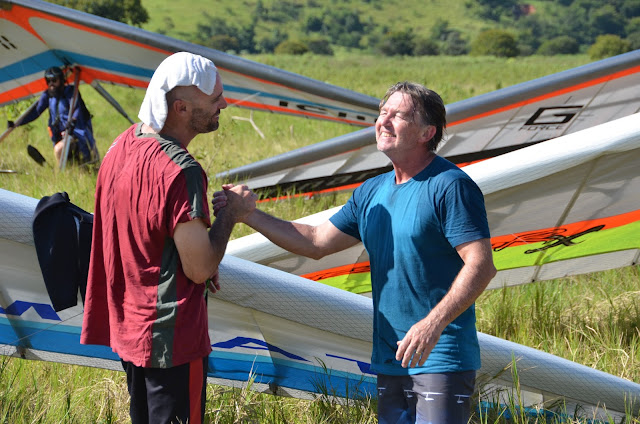 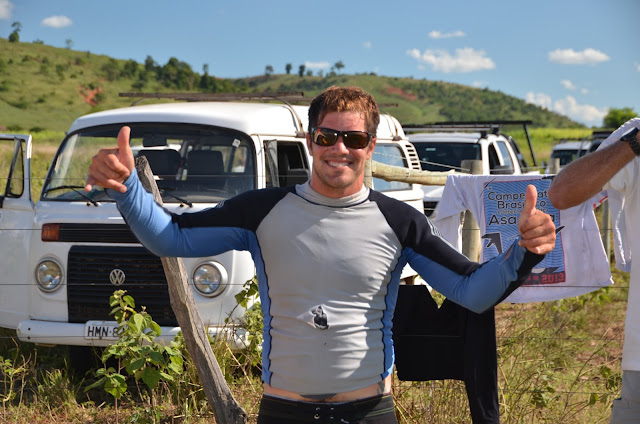 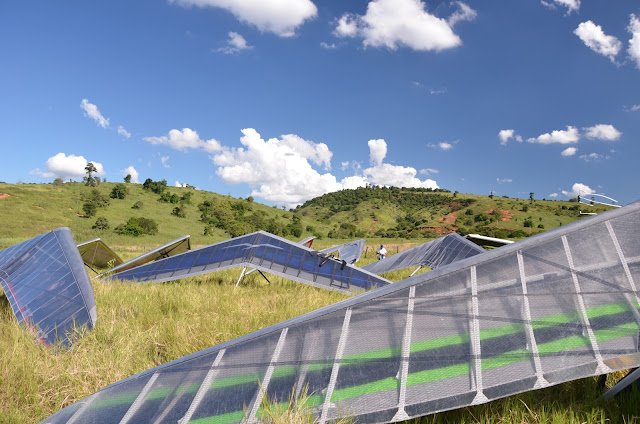 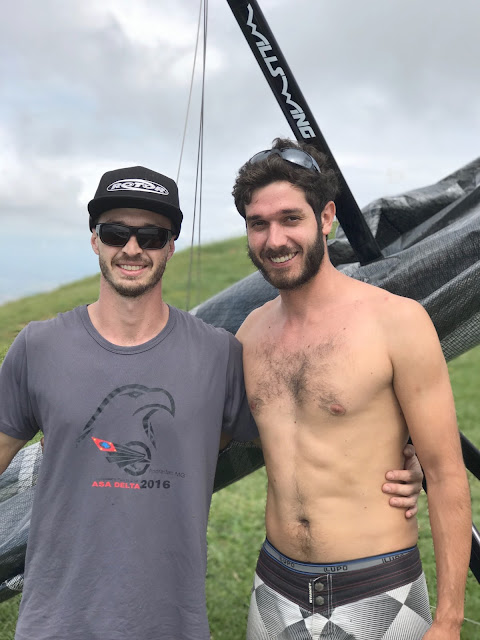 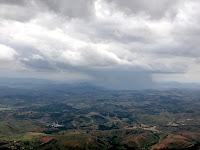 Finally a second task here at Valadares.  We had one day of off-and-on rain and a second day of steady rain all day.  Many of the city streets were like little streams.  But, flying was back on yesterday and they flew a nice out and return of about 90km that turned out to be more difficult than expected due to - yes - more rain! 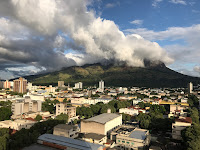 Most landed between the turnpoint and goal where the clouds were heavy and the ground shaded.  But, Jonny and David made goal first and apparently got to pack up in heavy downpours. Pippo, Andre and Konrado came in nearly an hour later after waiting out the rain.  But, other than those, no others made it in and in fact some big names landed quite short near the turnpoint (Davide Guiducci and Nene).  They're using an end of speed section goal here and another pilot, Jose, made the end of speed section but not the goal cylinder.  Under Brasilian rules, when a pilot makes the end of speed section, but not the goal cylinder, he gets no arrival or other points - it's as if he didn't make goal at all, other than getting points for his distance.  This is different than the score he would get using the current version of FS with GAP.

Yesterday's task puts Jonny in first just ahead of David, with Andre another 150 points back in third.   Behind them is about 300 points, so under normal conditions it may be tough to catch these three. Scores HERE. 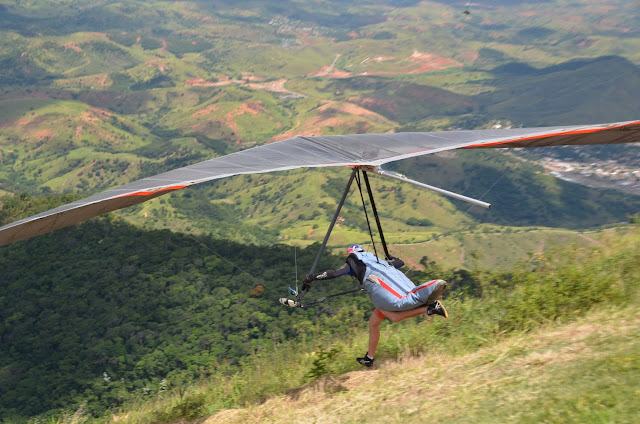 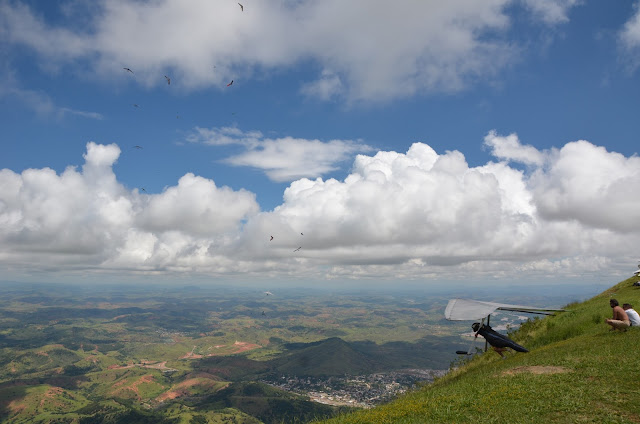 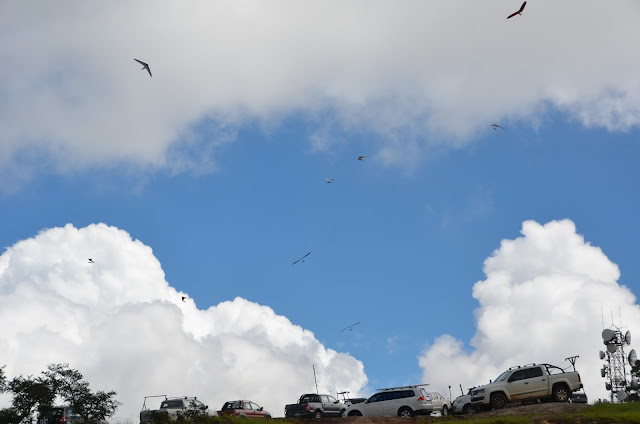 Weather isn't exactly looking beautiful for Day 2.  Thunderstorms and a bit of rain are in the forecast, but relatively small chance and off and on throughout the day.  The organizers initially said they would hold on going up to launch until 10am, but the pilots tended to be more optimistic and most came up anyway.

It's a bit grey, but the sun is peeking through here and there and they have set a task...an interesting one.  There will be a 30km exit radius on the start and pilots need only leave the start and come back to the goal field.  They can go any direction.  It should be pretty fun to watch and see who follows whom! 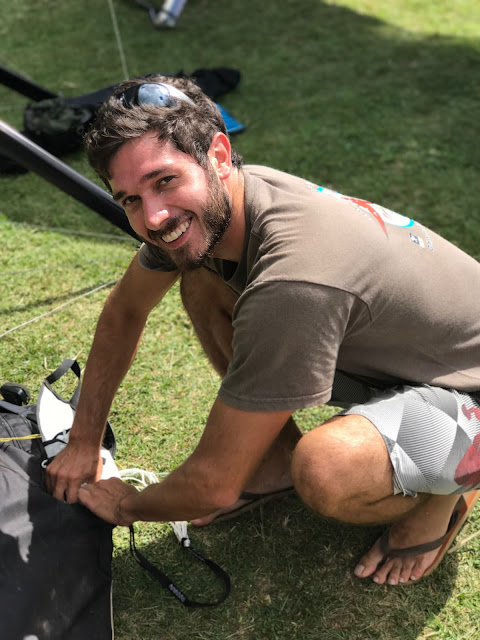 Daily scores can be found HERE.
at 9:26 AM No comments:

After a tough rainy winter in California, I got the opportunity to pop down to Brasil for the first of the two-comp Brasilian Nationals series.  The plan was to report the competition from the HG Outlanders blog, but we seem to be having some technical difficulties with it, so for now, I'll be reporting here. 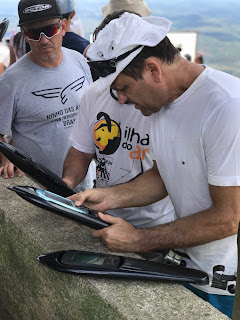 It's a long (time, not distance) drive from Rio de Janiero up here to what feels like the middle of very rural Brasil.  But it's worth every bumpy, pothole filled hour...all nine or so of them.  This part of the country looks like nothing I've seen before.  For 360 degrees the landscape is nothing but pretty little round, green hills.  Even way off in the distance, there are curiously larger rounded mountains....nothing like you see in Europe or the US.

Launch overlooks the city of Governador Valadares with two lovely ramps and plenty of green grassy slope to launch in both directions.  I'm told that conditions here would remind me of Colombia - relatively soft and smooth with short distances between climbs.  I do wish I was flying! Meanwhile, reporting from up here is not too shabby either. With a cafe and free wifi, it reminds me of Greifenburg, but without the rain. 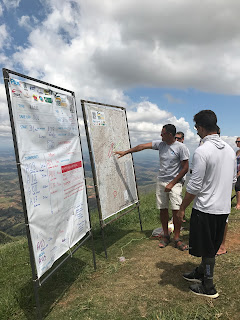 Two practice days gave us plenty of time to get acquainted with the steep drive up to launch, the busy city and the pretty scenery.  But today was the first actual task.  All the top Brasilian are here of course, along with Jonny Durand and half of the Italian team preparing to battle it out with the Brasilians at the end of the summer at the worlds.

Task 1 is a 115km run toward the NE and returning to a goal field just behind launch.  The first start was about 5 minutes ago and everyone was easily off the hill and is ready to go on course in lovely looking conditions. Thunderstorms are expected either tomorrow or the next day, so I'm sure they're happy to get a good task to start things off.

Everyone is tracking with FlyMaster live trackers and you can see each competition day HERE.  It doesn't look like they have the task up today, but you can see where everyone is anyway.  I expect the task will be there soon. 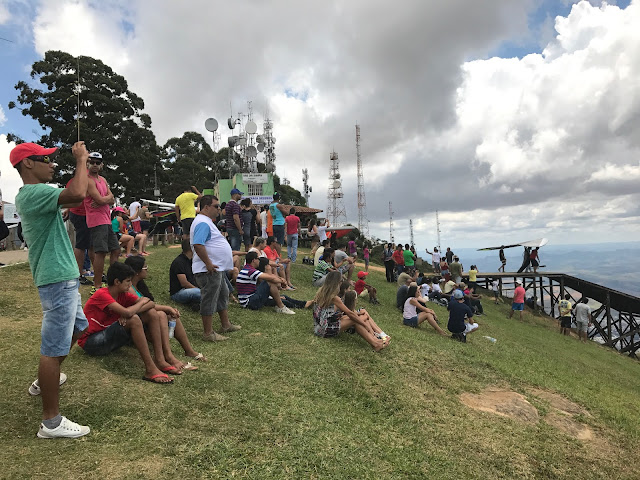 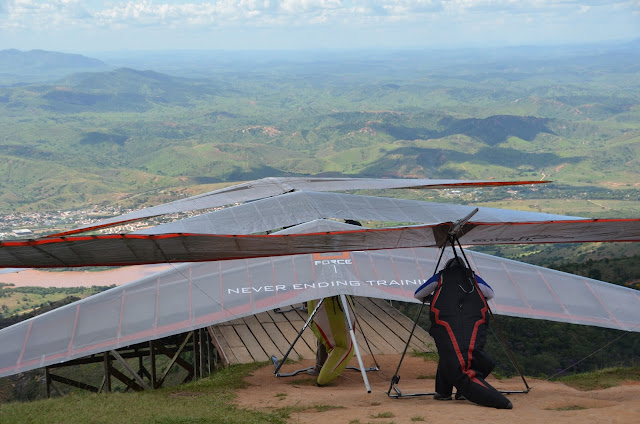