It's sooooo nice to be out of the rain and into the UK! Ha ha ha...that sounds like a joke, doesn't it! Coming to to the UK to get out of the rain?  Well, it's gorgeous here and apparently they had fantastic flying most of the time we were waiting in the rain in Germany.  What a switch!

So, we're up in the Yorkshire Dales - a beautiful part of the UK.  Rolling green hills, narrow cobblestone streets and cute little villages.  I'm enjoying the miles and miles of endless stone walls, cutting every great landing field into tiny little postage stamps ;-)

Yesterday was the first day of the British Open Series comp here in Yorkshire.  It was quite windy for my taste, too windy in fact in the end.  Of course, the Brits are used to this and have no problem flying in a bit of wind.  I'm still a big chicken and opted to stay on the ground while they flew an awesome 125km task to the beach in booming conditions.  Carl was calling 800fpm climbs and I think they blew downwind very quickly. 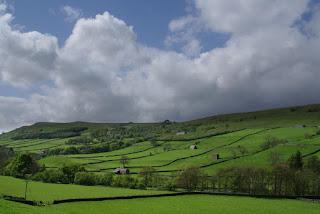 This is what everything looks like around here...so so pretty.  (no my picture, by the way - I've been lazy with the camera.  I think I have to attribute this one to freefoto.com).
at 4:47 AM No comments:

Some random pics of what we did during the Women's Worlds....

The organizers were great at finding group activities for us on every day that the task was cancelled without going up the hill.  One day a bunch of us toured a brewery in a nearby town. 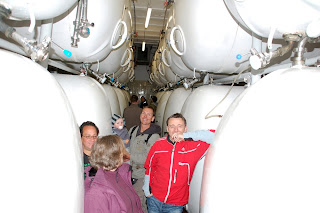 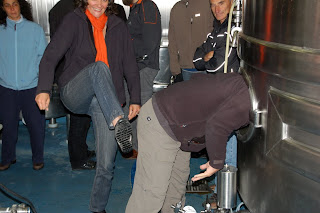 Of course, there was Neuschwanstein Castle.  Very impressive looking, but disappointing to learn that it was just a tourist attraction.  King Ludwig never lived there - he died before it was finished.  Apparently it became a museum just a few months after he died. 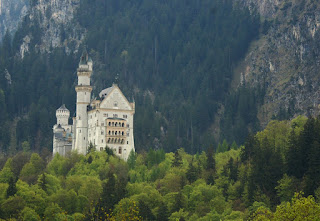 Our cable car passes also gave us free entry on the alpine slide.  It was the only place there was any racing going on. 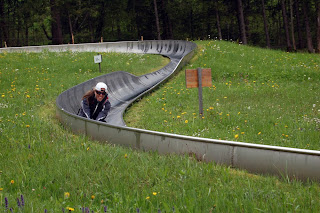 Maria and I found bikes to rent and those were our main transportation around the village and to and from headquarters.  I started to feel like one of them. 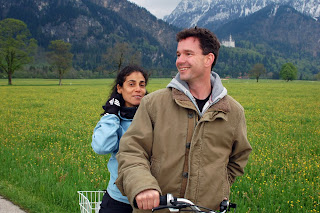 And of course, Maria cooked lovely meals for us as often as possible. 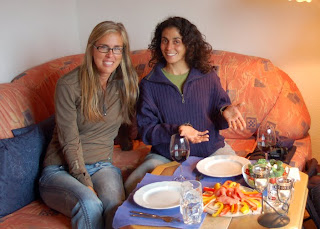 And, when it was all over, I actually flew!!! 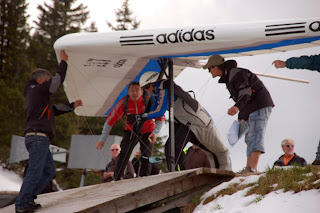 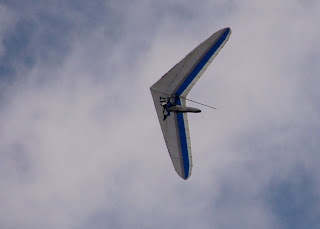 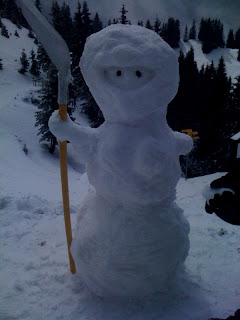 Every form of snow imaginable has fallen on us here at launch. We find
other ways to amuse ourselves.
at 4:27 AM 2 comments:

For the first time in more than a week it was starting to feel like we might do what we came here for.  The delay until noon was just enough to tempt us up the hill under at least partially blue skies.  We had nearly a foot of snow on launch and it was really cool for this California girl to set up in the snow for the first time in my 20 years of flying.  I was so excited to find that a task was set and the plan was to launch at half past two.  Unfortunately, not ten minutes after the task was set, the sky started looking very angry way out in front and the weather man told us it was coming in fast.  We all derigged in a hurry to miss the coming storm.  Although we managed to get the gliders under cover, the high winds arrived just as we were ready to head down the hill and the wind shut the cable car down for a while.  The restaurant on top was a great refuge to wait it out though and we relaxed with a cup of tea and apfelstruddel for a short while before the cable car opened up again.

This morning’s sky looks quite similar to yesterday’s and currently we are on hold until 11:30.  But, as I sit typing, hail is falling :-( 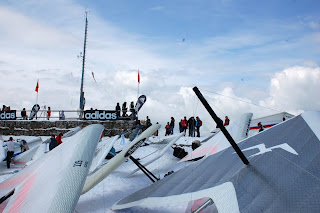 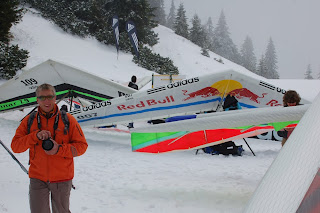 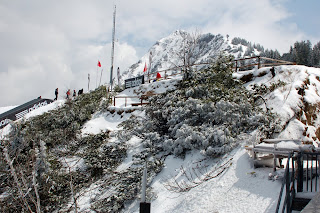 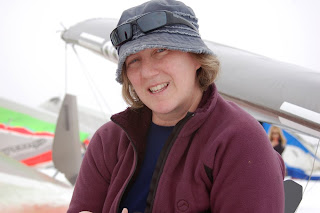 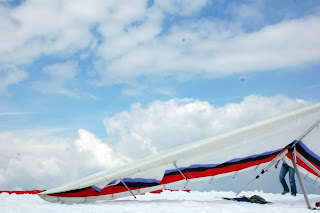 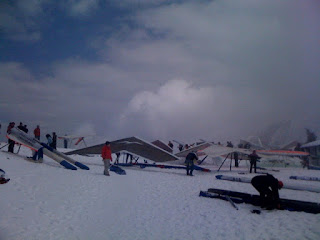 I love Germany in Winter... 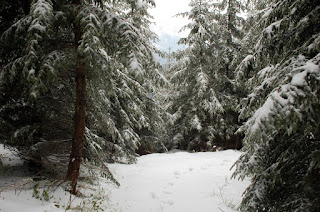 ….oh wait, it’s May :-/  This picture was taken about halfway up to the Tegelberg launch yesterday.  So, you can imagine what launch looks like!
It’s hard to get motivated to write much of anything around here.  Day after day we wake up to dark skies and cloudbase near the ground.  I understand all too well how hard it is for organizers in these situations.  You spend so much time and effort making sure everything is prepared and together only to have no control over the one thing that can put a stop to it all.  Some have given up and left already and I can only imagine how disheartening that must be.  As of this morning, the forecast looks like we might have one day of flying, at best.  I hope my read is wrong.
Meanwhile, we all know Schwangau so well.  We’ve done nearly everything there is for a tourist to do here.  The organizers have activities planned for the cancelled days and for each evening.  We’ve had Bavarian night, Italian night and last night was flying films night.  During the rainy days we hike the mountains, sit in the thermal bathes and saunas, cycle, shop and work.
Yesterday I hiked with a group two thirds of the way to launch.  The area is so gorgeous from the ground and I can only dream about the view from above.  Had I known that the practice day might be my only chance to see it, I might have savored it a bit more. 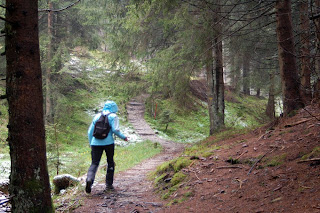 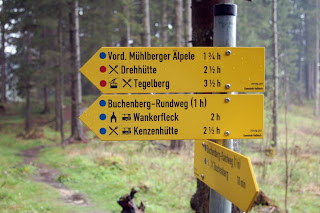 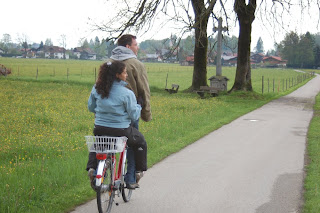 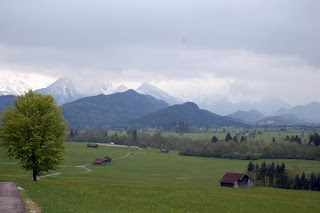 It was hard to believe we weren't flying yesterday because the sun was shining and the clouds looked lovely.  In fact, it was the first day we had such nice sunshine.  However, the meteo guy was very concerned about the Foehn that was supposed to arrive.  We were apparently just on the edge of it.
All of the girls went off in different directions - some to the castle, some working, some hiking up the mountain.  Maria and I got bicycles and decided for a ride out to the Swift field for a picnic as they were having a task. 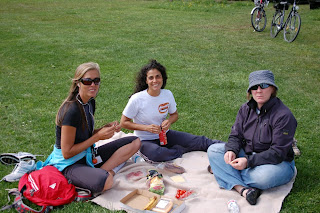 There were many spectators out at the airfield (mostly pilots wishing they were flying) and we could see much of the task from there.  We watched the guys race up and down the ridge and then land back at goal at the airfield.  Not surprisingly, Manfred came in first with a nice loop over goal.  Bob Baier was second and Steve Cox came in third.  Brian Porter and Jacques Bott both had difficult days and landed short. 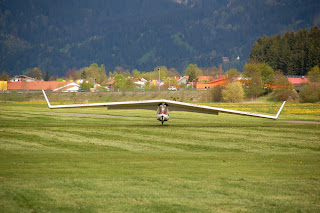 Now I am sitting in at HQ eavesdropping on the Class 2 meeting regarding the Archeopteris (I'm sure I've spelled that wrong).   From my understanding, it is a fairly new design by a Swiss company.  It has not been demonstrated to be foot landable and so it doesn't qualify as a Class 2 glider.  It seems it wasn't noticed before the comp started, so now after there has been a task it is unclear whether it should be included.  Interestingly, all of the guys here in the Class 2 comp want it included in the comp and they are discussing ways to get it in.  Heather asked who would protest if the pilot flying the glider won the meet.....they all agreed that they would not.  In light of the small number of Class 2 pilots and gliders, I think most everyone wants to find a way to encourage more of them.
According to Section 7 rules, it must be demonstrated that the glider can be foot landed.  Brian Porter is currently arguing that there is no time period for making this demonstration and that if the pilot wanted to demonstrate it here, he should be allowed in the class.  I think the CIVL reps are very very reluctant to allow for this.
Here is the Archeopteris at goal yesterday. With the discussion coming to an end, the final decision is that they will not allow it to be included in the world championship competition, but they will do two sets of scores, one with him and one without.  So he could win, but not be the world champion.  He will also be allowed to line up with the other Class 2 gliders at launch time and he will not be required to launch first or last or have any less priority than the others.  It is interesting to me to see how fervently all of the Class 2 pilots are arguing to get this glider in the class.
Another interesting tidbit I just learned....although Manfred arrived at goal first yesterday, the Archeopteris won the day because of the leading bonus.
at 3:55 AM 5 comments:

Yesterday gave us the small hope of a task so we all made our way up the hill.  We have a setup order here because there isn't so much space up top.  The alpha group set up, only a few of the bravo group did and those of us in the charlie group were slow and lazy - lucky for us.  They thought perhaps there would be a small window available where they could get the girls off the hill and on a task.  So, we waited for over an hour before the rain started and the wind came from over the back. 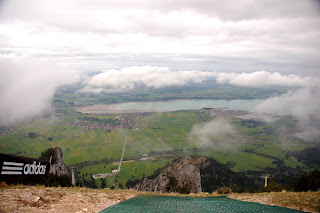 It was a lazy coffee day for most.  Maria and I joined Tim and Linda from the US and Daphne from the Netherlands for the afternoon. 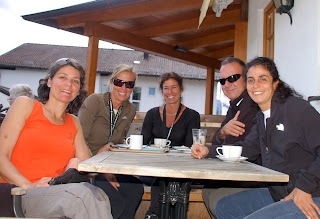 Today's forecast was for strong Foehn and dangerous thunderstorms in the afternoon.  The task was cancelled at the team leader briefing so we didn't have to head up the hill.  Otherwise, the day looks lovely so far - the warmest we've had yet.
at 3:22 AM 1 comment:

From the heat and humidity of Florida to the cool, rainy alps....what a trip it has been.  I guess I forget sometimes that there are four seasons in most parts of the world.  I left the hotter of the two Florida seasons for Tegelberg where it is definitely still spring with a nip in the air and plenty of rain.  Thankfully, it's not too terribly cold and anyway it is so gorgeous here that I probably wouldn't even mind.  Although the rain is a bother, everything is blanketed with vivid green grass and wildflowers of every color in the fields. 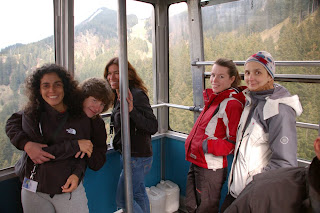 We drove down from Munich on Friday evening and I was instantly in love with the landscape.  We're on the edge of the Alps here so there's spectacular high mountains behind launch, but comforting flatland with huge landing fields everywhere out front.  What more could you ask for? (ok, well, sunshine would be nice ;-) 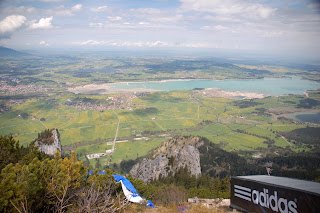 Today was the opening ceremonies, but also the only day for the next few that it looks flyable so everyone was up the hill for a quicky before the opening.   It was a perfect day...light smooth lift for cruising up and down the ridge to check out the area.  I couldn't have been happier with my first flight here....got the nerves shaken off and had a chance to check out Damien's handling after the baby daddy made a few modifications to suit the CIVL.  He's sweeter than ever, but not necessarily so pleased with new pink accessories ;-)
I hope to get some shots of the castle from the air soon.  It's a spectacular site and makes me feel like I'm at Disneyland. 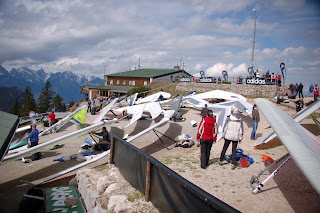