David Glover and the Hamilton Boys 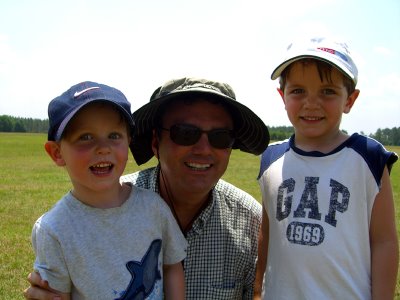 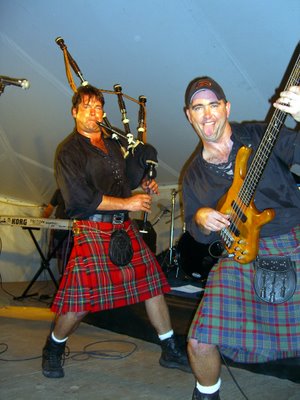 The Red Elvises couldn't make it this year, so we had another band we were calling the Green Elvises. I forget their real name, but they were great. Classic rock music with a twist - bagpipes! Everyone loved them and danced all night!
at 12:22 PM No comments: 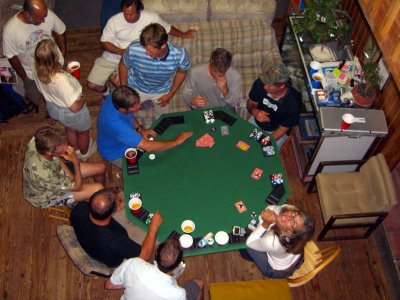 Ok, I've fallen a bit behind. It's Sunday afternoon and we look like the walking dead. The party went on very late last night with a final poker game, gymnastics by the French and a lot of foosball! I'm too lazy to write much of anything, so I will just post some pictures and write later. I won't bother posting scores because anyone who is really concerned can look on the Flytec website for official results. Anyway, top three in the end (and beginning and middle) were Oleg, Brett and Jonny.
at 12:47 AM 6 comments:

The weather forecast was super iffy today- the task committee was really unsure of what to call. But, they went with a 102km out and return to the north and back to Quest. Its about 4pm now and the sky is looking very dark and overdeveloped to the west, so we're not so sure how its going on course. I just got a radio report from Glen and he is about 20 miles out. So, we won't have to wait too long to see if they can get all the way back.

Result (unofficial). They're still landing, but here it is so far:

Oleg
Bruno
Curt
Brett
Robin
Jonny
Mario
Joerg
There are a few others coming in too, but I can't really tell who they are. More later!!
Sent via Cingular Xpress Mail with Blackberry 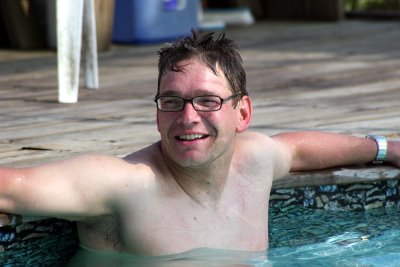 The task committee felt that they had completely undercalled the task yesterday, so they went for a slightly longer one today (although even then Davis worried that today would end up being undercalled too). The sky looks beautiful and we can see the convergence setting up to the west of us. They are out now doing a 79.3 mile square to the south and west. We're expecting the first of the rigids in in less than an hour with the top flexies close behind. It will be interesting to see if Brett and Jonny can finally get past Oleg ;-)

There's been some complaining of cloud flying going on on course. The problem is that those witnessing it aren't willing to actually report the offending pilot(s), so there's really nothing to be done. Jonny announced that he would be flying with his video camera today and filming anyone he sees cheating. Then Curt stood up and asked who was cloud flying. Of course, the offending pilot(s) wouldn't fess up, well, not all of them anyway. Bo immediately jumped up and said he was in the clouds yesterday. That got a good laugh out of everyone.

Here's a shot of everyone's favorite German, Joerg! David joked this morning that he is likely a serial killer, but no one would ever believe it because he's just so nice. He always has a smile on his face, even after a less than great landout/retrieve the day before yesterday. We love having him here.

I'll post the unofficial results from the Crackberry as the guys are coming across goal in a little while!
at 3:18 PM No comments: 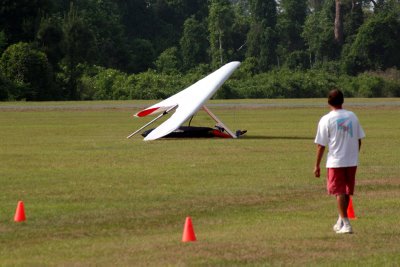 We had so many in goal yesterday and it was great fun to watch. Many excellent landings (which wasn't much fun for the paparazzi ;-) and here is my favorite. Bruce from the UK came in with his zipper stuck. Thanks Bruce for calling out to those of us on the ground. I got the entire progression of him coming in fully prone at 5 frames per second. Can't post all the pictures here of course, but this is the grand finale. It was a perfectly executed belly landing!! (That's Oleg watching)

David told at the briefing this morning that yesterday was a first for the Quest crew (and pilots too, I suppose ;-). We had 85 competitors and exactly 85 launches. No weak link breaks, no relights. Pretty nice for those working so hard on the ground to get everyone in the air.
at 3:12 PM No comments: 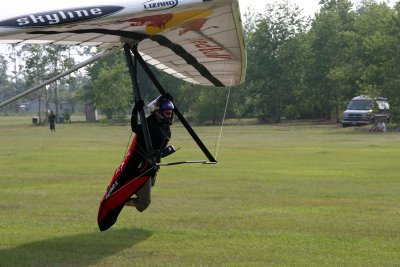 For Dick and Doris 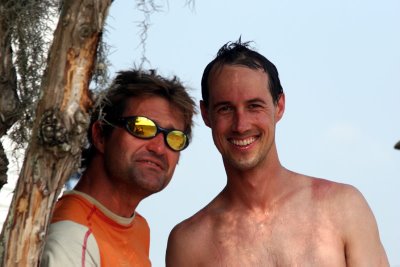 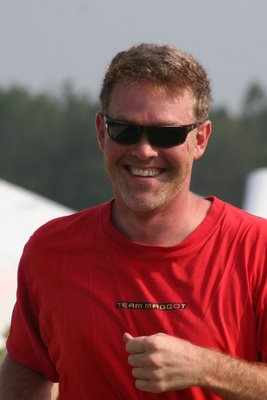 Here are some random pictures! This one is Chris Smith, our up-and-coming top US pilot (flying a Litespeed, of course)!
at 8:42 PM No comments:

Standing at goal, the first three just flew over. Looks like Oleg, Brett and Robin Hamilton with Jonny about 30 seconds behind. Nice tight finish. There are heaps more coming....looks like there will likely be plenty into goal today!!!

Lots of happy campers today. 46 in to goal. I'm in the clubhouse now blogging while I watch the poker game. David is drinking considerably less than last night, so I can't say that he is nearly as entertaining. But anyway, the clubhouse is jam packed full of bloggers, foosball and PS2 players.

Here are the overall standings after three tasks:

...and I can't remember the others. 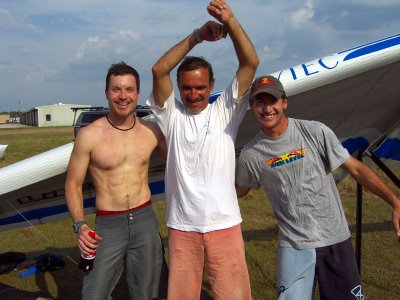 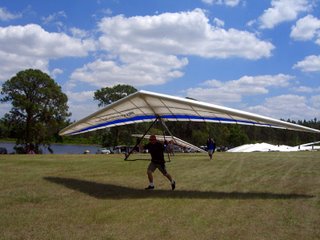 Oleg in to goal first, with Brett a minute or so behind. Jonny came in about 5 minutes or so later. They all took the first start. The next group should be coming in soon!!
Sent via Cingular Xpress Mail with Blackberry

Although there was still a bit of wind today, it was lighter than yesterday and a bit more out of the north. So, they called a 70-some mile task straight to Avon Park. After staging, the sky looked pretty overcast, so they moved the start times up a half an hour hoping conditions would improve. They did! The sky looks beautiful now, but it is probably the hottest day we've had this year. Starting to feel a bit more like late April.

They're all on course now and I'm on the road hoping to beat them to goal. I'll give an update when I get there!
Sent via Cingular Xpress Mail with Blackberry

Just back from a long day of retrieving everyone under the sun. It was a bit windy and difficult, so Russel Brown in a rigid was the only one to make goal. We don't have any official results yet, but it appears as though Bruce a Pommie may have made it the furthest and won the day for the flexies. But, he only made it maybe 2km from where most of the other top pilots landed....all were likely within about a 3 or 5km circle. So, the scores will be fairly close and low I would expect.

They're saying tomorrow might be too windy for a task (please, please, please not another Florida Ridge :-( We'll see!
at 4:35 PM No comments: 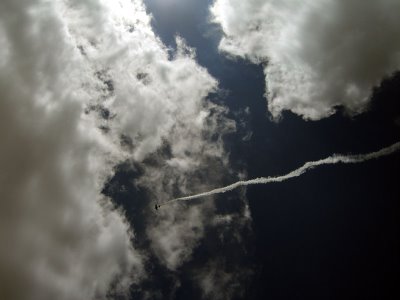 The weather is close to perfect for the first day. Winds 5 to 10mph out of the west. The task committee (Robin, Davis and Jonny) called a 102 km task with two crosswind legs, first going north to the turnpike, then south to Dean Still Road (down near Wallaby) then returning to Quest.
Terry Reynolds came over in a little aerobatics plane and put on a short show right after the briefing. 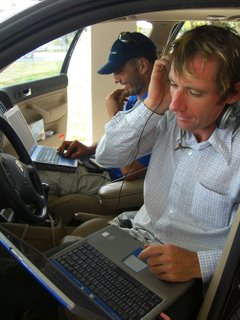 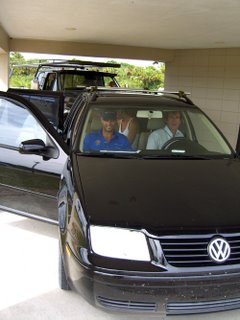 Although they have no wifi at the Florida Ridge (boy are we spoiled at Quest), there is an open connection at the resort where many of us are staying. It only works from the office area, so this has become blogging headquarters for most of us.

Its a funny site to see a bunch of cars parked around with people inside glued to their laptops.
at 8:27 PM 2 comments:

Bo seems to be happy to be back competing :-) 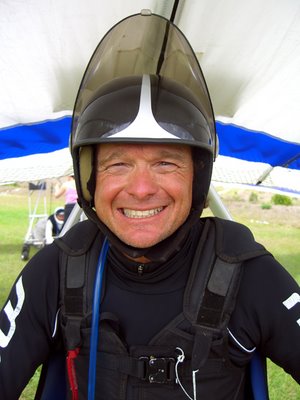 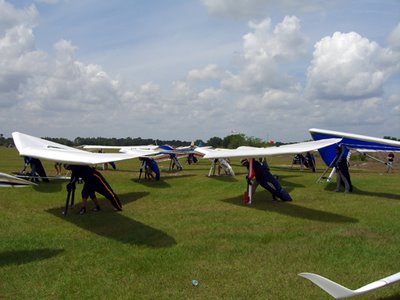 Driving down to the Ridge 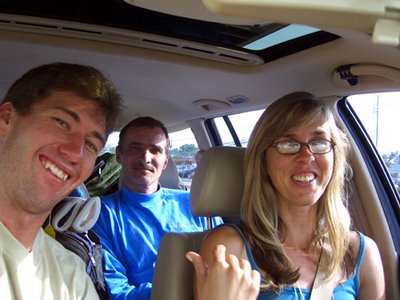 They called a 78 mile downwind task today in pretty stong wind. I think a lot of people were not exactly expecting a task as it was averaging 25mph. But, they pulled one off.

I am driving back from goal now with Jonny, Kevin, Brett and Dustino. All made goal except Dusty, he was a bit short. Looks at this point like Curt won the day and probably Oleg second. I'll get the top 10 on when I get a chance.

Everyone is saying it was a pretty rough day. Kevin says he was in the roughest thermal of his life today. Hard to imagine....Florida is not supposed to be like this. Jonny was chased away (at goal) by a lady waving a broomstick at him. I guess the organizers didn't secure the goal field in advance.....ooops :-(

I'll post some good pictures when I get home tonight!