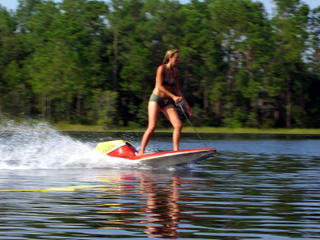 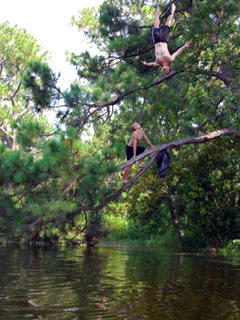 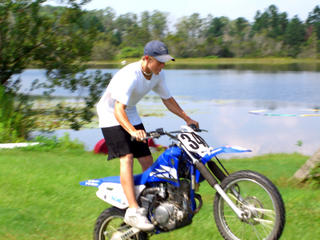 I'm home at last...back at Quest. Although it is quiet around here in the summer, we're still having a blast with the new toys. I haven't been checked out on the cool new mower yet, but I got to try out some other less utilitarian toys this afternoon with Mitch and his boys. What fun! Someone found something they're calling a powered surfboard out in the bushes (apparently?) and got the engine running. It looks a bit like a really old jet ski. As with most things requiring a minimal level of coordination, I suck at it. But, I think it was good for entertaining the others :-)

Mitch's son Bryce has a great dirtbike that he was brave enough to let me try out. But, he's much better than me, so here's a nice shot of him!
at 7:42 PM 6 comments: 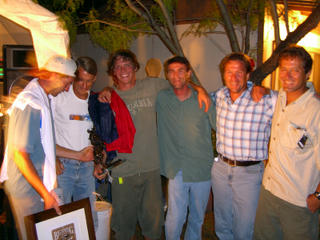 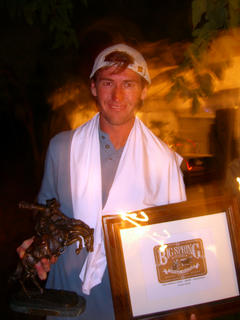 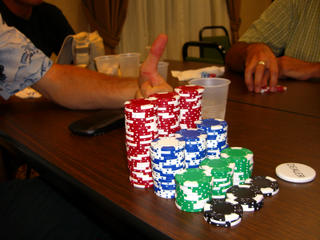 It's a little late (I'm already back in Florida) and I suppose everyone already knows, but Jonny won the Big Spring Open. I knew he would. The prize giving and party were great fun...here are a few pictures. Jonny's trophy was just too big and heavy to cart all the way to Brasil and then home to Australia, so I had to take it home with me. Its a really cool Frederick Remington sculpture of a cowboy. I might just hand deliver it to Oz in the next month or so :-)

I was the big winner in the final Texas Holdem game. It was tough, but thanks to Robin's bartending skills, no one could figure out when I was bluffing and when I had a real hand, since everything was getting pretty giggly.
at 5:25 PM 1 comment:

See's Jonny's blog for the full story. Kevie is fine, but will take the day off today while he repairs the glider and rests a bit. www.jonnydurand.blogspot.com
at 12:05 PM 3 comments:

We just arrived at the airport this morning to find that apparently Kevin was up doing aerobatics in strong wind and tailslid, tumbled and deployed two chutes. He is fine, but not back to the airport yet. I hear it just happened 15 minutes ago. Will be back with an update soon!
at 9:30 AM 2 comments: 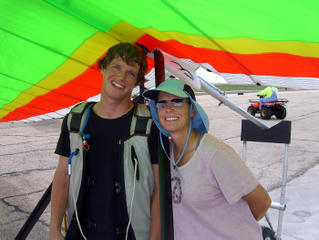 Dusty smoked everyone today coming into goal 20 minutes before anyone else. This is Dustin and his mom, she's here watching the comp all week. 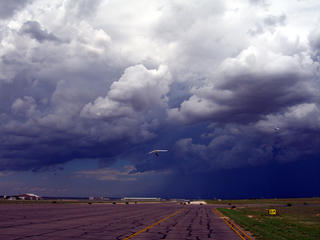 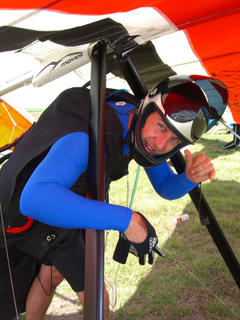 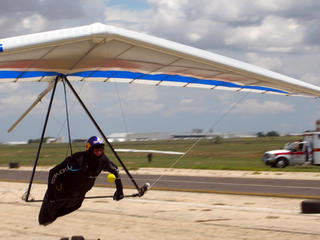 Yesterday's task was cancelled when a giant cell came in with a great lightning show. Everyone came rushing back to the airport which made for some entertaining landings (no one was hurt thankfully).

Today's task was a 76 mile downwind run. Jonny won the day!! We went for a nice dinner with all the Moyes boys and the conversation was nothing but baby talk....shows how old we are all getting. Between Denny, Kraig, Glen and Phil, I have never heard so much about baby poo, barf, binkies and blankies. Not the topic I would have expected.
at 10:53 PM 2 comments: 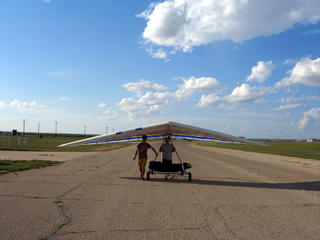 60 mile triangle today. Looks like Kraig won the day with not so many gliders in goal (I think 6 total - Mikey, Paris, Jonny, Carl, Robin...with the exception of Paris, all Litespeeds! :-). Jonny made goal, but didn't make the airport, but was lucky enough to get a dolly to roll the glider back to the hangar.
at 9:46 PM 2 comments: 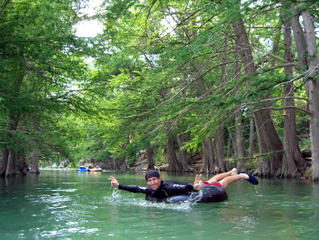 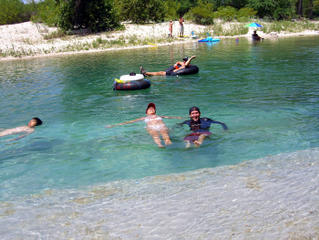 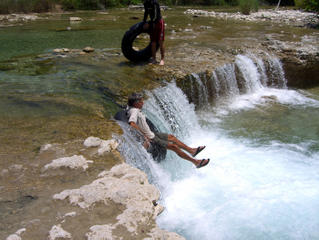 Jonny, Bobby, Shigeto and I went for a nice float down the river just outside of Leakey on our last day. The water was crystal clear and nice and cool! Bobby seemed to have a really great time and I hadn't seen him smile so much since the Red Elvis' came to Quest!
at 5:41 PM 3 comments: