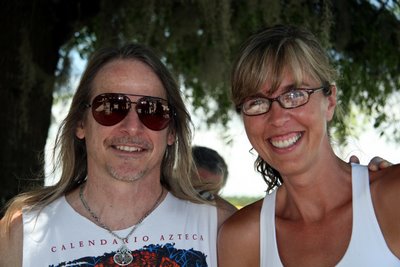 So yesterday, most didn't know it, but the women's goal was at the airfield of a man named Steve Morse, who played with both Deep Purple and Kansas. Corinna was the only one to make goal, but ended up talking quite a bit and Charlie was there with the camera, so they gota nice interview. Well today he decided to come out and watch the flying. He is a pilot himself (ultralights and other small planes, I believe), so he was really interested in seeing the comp.

Here is a shot of us!

By the way, there were tasks called to the north and everyone went on course. But, the sky quickly overdeveloped and the task was cancelled in the end.
at 3:36 PM 1 comment:

We had to wait much of the afternoon, but it turned out to be a great day. The sky looked similar to the last two days when we woke up this morning- overcast and full of gook- but by noon it was starting to look like a task might be possible. The swifts and rigids had a 50-something mile task to the north and the girls went 40-something in the same direction. Just as the last of the girls were launching we got reports from a few rigid pilots on course that an Atos was tumbling. Several Dragonflies were deployed to try to find the guy. Reports were that he had tucked/tumbled, but did not deploy his chute. It was an hour or so before we got any more information, but we learned fairly early that he had in fact NOT thrown his chute, but landed (or hit) softly enough that he was unhurt. I don't know the guy, but his name is Alex Schreiner, either from Switzerland or Austria. Will be interesting to hear the story when he returns. We normally don't have big enough air here in Florida to cause a tumble, but who knows. We're all just happy he is ok.

In the meantime, there were plenty of rigids at goal - someone said something like 30. However, only one girl made it, that was Corinna. She's going to be very happy. I wouldn't want to jinx her, but I think winning the day today may have sealed up the win for her! Let's hope!
at 6:59 PM No comments: 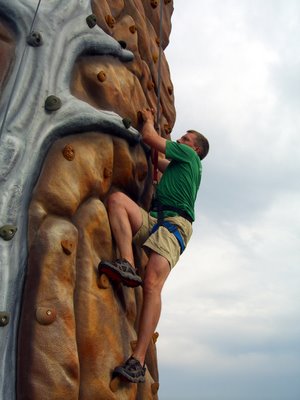 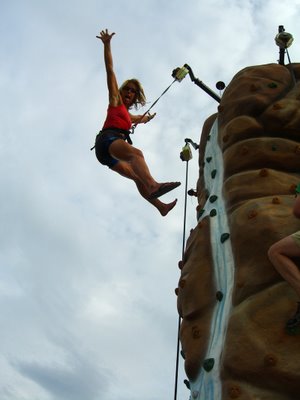 It's been a bit slow the last few days as we had some muck in the air the pretty much killed all the lift. The last two days were cancelled and we thought today might be as well. But, here we are at quarter after one and it looks like they are going to get a task in. Everyone is heading to the north because the sky looks clearer that direction. The swift and ridig tasks are 54 miles and the girls are going slightly shorter for 44 miles.

Day before yesterday was officially declared international bonding day by the meet organizers. It turned out to be a blast. Since the last two days' tasks were not cancelled straight away, everyone pretty much hung around Quest and goofed off for what was left of the day. Jim and Russel erected one of the portable climbing walls and everyone was crawling around on it. We also had a bit of redneck olympics with the horseshoe pits and frisbees, and even an inpromptu foot surgery! So much accomplished in a single day ;-)
at 12:12 PM No comments: 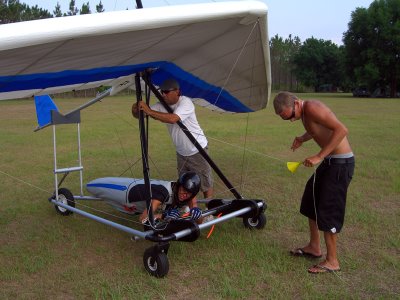 Today's forecast looked much like yesterday's, so there was quite a bit of grumbling in the morning. It's funny to me how much more politicing there is going on at a world meet then at any regular big meet. I don't have the official results yet, but some of the rigid pilots were unhappy that the start times were so far apart (1/2 hour) yesterday because those that had to take a second tow were unable to even get in the air in time for the first start. So, that meant that Robert Reisinger, who had the fastest time by far, ended up in 5th place because he wasn't able to get the first clock. Alex Ploner, who was only 1 minute slower than Robert, ended up 12th. So, the briefing this morning was filled with grumbling over the start intervals.

Apparently the complaint of the day today was that some girls were being towed higher than others....god forbid! For some bizarre reason, the girls' safety committee decided to hold the girl's launch for a half an hour (I suppose just to wait until conditions and wind got even worse ;-) The result was the rigids all launching first and the girls ending up with the high cirrus that killed much of the lift. In the end, I believe every single girl had at least 2 tows, some several more! With the towing difficulties the girls are having, I don't think it was the best idea to wait to launch into the worst conditions....but, of course, no one asked me ;-)

Anyway, we are all back here again enjoying a lovely meal that Primus cooked! The girls had a 60 or so mile task to the south. No one made it, but it looks like Corinna may have been the closest (about 20 miles short). The guys went all the way down to the Florida Ridge (125 or so miles) and I just heard that around 35 made it in!! They will be very happy (and tired...the drive back is at least 3 and half hours ;-(

As for the Swifts, only Manfred made it back here to Quest. I don't recall what their task was, but goal was back here. I guess Robin was in second, landing 10 or so miles short. I haven't heard anything yet about the Swiss guy or Mark, Armand or Brian.

It will be a late night for the scoring because most have a very long drive home. But, here is the link to the scores as of yesterday - http://flytec.com/Events/2006/2_5_w_worlds/scores.htm
I didn't get any photos today....too lazy to carry my camera around, so here is a shot of my first flight on the new glider! Isn't it beautiful (note the perfectly matched harness) !!!
at 7:49 PM No comments: 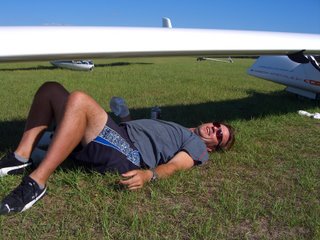 I just spoke with Corinna by phone and it looks like there were 5 girls in goal and probably all, or close to all of the rigids. Here's the unofficial lineup of girls:

I'll see what I can find about the rigids. In the meantime, here's a shot of today's Swift winner, Robin Hamilton (flying for the UK) relaxing under his glider.
at 4:26 PM 1 comment:

The rigids and the girls had the same task today, oddly enough. It was somewhere in the 60 mile range with goal down south to River Ranch. Pretty pitiful excuse for a rigid task if you ask me. The Swifts went a bit further returning back here to Quest. We had fairly strong wind out of the west, making for rough towing conditions. And, it seems at times it was a bit hard to stay up. Alex Ploner had 2 tows, Robert Reisinger had at least 2, possible 3 and David Chaumet had at least 2 or 3. If the likes of those guys can't stick, I don't know how the girls managed to stay in the air ;-) (oops, that sounded a bit sexist). Overall the launching went well, despite the rough conditions. A few girls opted to stay on the ground though after multiple rowdy launches :-/

This just in: Robin is first in to goal a solid 15 minutes ahead of Manfred (they took the same start!). Armand (Canada) and Steve Cox (Switzerland) were in next, a ways behind Manfred. So far no siting of Brian or Mark.

I also hear that there are at least 20 gliders in goal at River Ranch, but I don't know how that is divided up between rigids and girls. I do know there is at least one girl - Corinna - hopefully more!

The meet starts tomorrow after a great little party this evening. Technically, it was the opening ceremonies, but really it was just dinner and a good time. In keeping with the down-home American theme, we had Texas BBQ and a blue grass band. But, the big draw was the aligator wrestler that came out and gave us a "safety-briefing" in case we landed in the swamps ;-) Bottom line is, take a roll of duct tape to tape their mouths shut. It was very timely as we have had three people killed by alligators in Florida over the past week.

The alligators seemed to be a real hit and everyone got to hold one and have their pictures taken. After they left we did a bit of square dancing to the calls of Charlie the German team photographer. What a hoot. Charlie didn't have a clue about calling and neither did anyone else, so it was a good laugh for everyone.

The comp starts tomorrow and we've been promised a rain-free forecast for at least the next five days out. Unfortunately, we don't have a wind-free forecast. This has been an unusually windy spring and we can all just hope that it mellows quickly.
at 9:58 PM No comments: 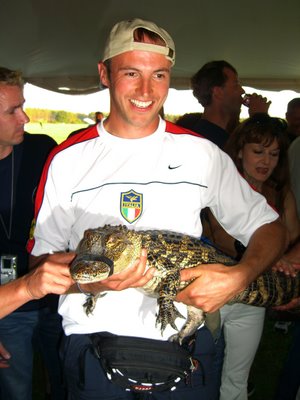 Kermit the Frog was afraid of alligators and used to say that. I guess only mom and dad will appreciate that ;-) 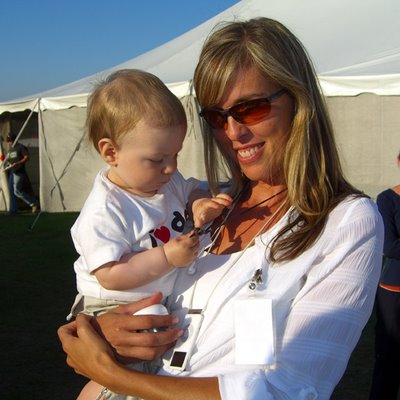 This is little Thomas Ruhmer. What a sweetheart this little guy is. He seems to just love whoever he is with at the moment and let me cart him around for an hour during the opening ceremonies without a bit of fussing - had his eye on my iPod though, so I finally had to give him back to his daddy.

Someone suggested that I drop him and see if he flies ;-)
at 8:09 PM No comments: 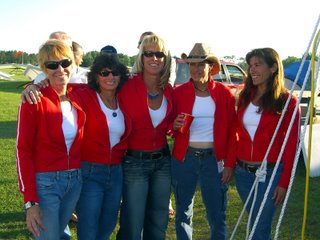