Well, I decided to come home for a little bit, get away from the Southern California fast life ;) There is surely nothing nicer than waking up to the sound of Dragonflies!! It was pretty overcast, so I didn't fly today. But, Joe convinced me to go out with him and see if we could get a bit of road rash. After my little desert tuck-n-roll, I figured, why not, I heal quickly ;-)

We have this new toy, and I've forgotten what it's called already, but it is something like a skateboard that has been cut in half so that each leg/foot can move independently. You just put each foot on its own metal plate with wheels. But, unlike skateboard wheels, they aren't side by side for stability, they're inline, like inline skates. So, it takes quite a lot of coordination and a strange sort of sweeping action with the back foot to get moving. They tend to try to force you into the splits ;-) and are pretty unstable, so I was suprised to come home tonight with no road rash whatsoever. I first thought it might be simpler if they just had some straps to go over the top of your feet. But, you see the first time you lose control that the ability to dismount quickly is key! 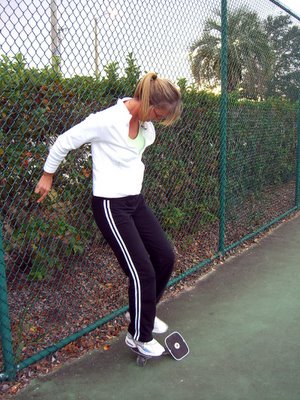 Its a lot harder to get onto that you would think. The plates don't balance flat, so you have to either tip them up as you're starting off, or you have to have something to hold on to.
at 10:00 PM No comments:

And here's one of the expert. 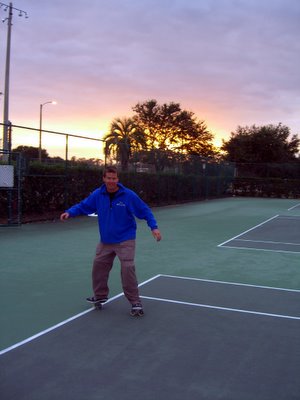 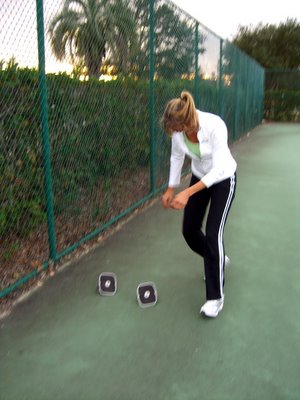 I'm such a klutz! 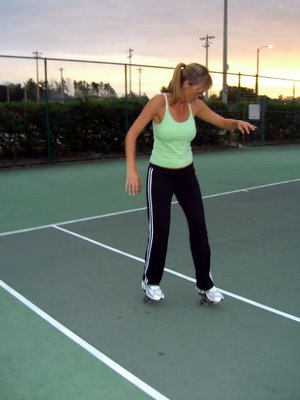 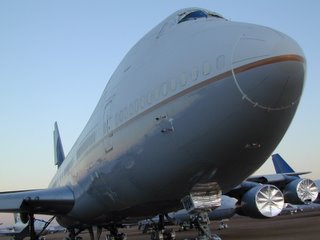 The desert is by far the coolest thing this town has going for it. My parent's house is kind of on the edge of town, so it only takes a few blocks of running before I am out into the desert chasing jackrabbits through the sagebrush. I have been running nearly daily. It seems there's not much else to do in this town and I am still determined to lose that belly ;-) 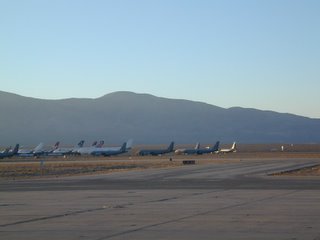 Lancaster is the nearest normal sized town and I discovered on the first trip there (its about a 40 minute drive) that the airplane graveyard that Alex and I had so much fun visiting several years ago is no more than 15 minutes from Cal City. We were chased away by a security guard who called us "complete idiots" for not noticing the sign that said "Absolutley NO Pictures." Although he threatened to, he didn't take away our cameras, so we came away with some real close up shots of very large airplanes. Turns out, we were complete idiots because neither of us noticed the sign, even though it was quite obvious when he angrily pointed it out to us. Anyway, it's not exactly a graveyard. What I am told is that it is more like a parking lot for commercial airliners that are not currently in use. That makes more sense as many of them looked rather new and in good shape.

We get a gorgeous sunset nearly every night. Here's one taken from the back porch of mom and dad's house. Sometimes I feel like I moved from one bubble to another being here in our own little world. Mom and dad bought a house right in the middle of where everyone else is building their's. GW's is just across the street, along side Charles' (one of JB's co-workers at Sportvision). Dale (one of JB's childhood friends) is building his house right next door to mom and dad and Mark (my baby brother) is building his second one about 2 blocks away. JB's is apparently fairly close too, but I haven't been offered that tour yet. 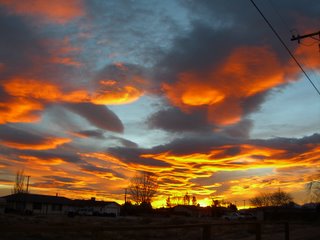 They said "California is the place you ought to be".... 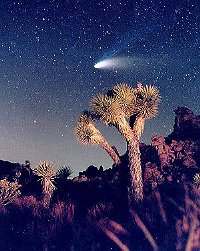 So I loaded up the suitcase and I move to California....City that is!!

Ok, a certain dork was complaining that I hadn't updated the blog in ages and he was sick of seeing pictures of girls flying in dresses. So, here I am with nothing to say and very little to even show. The point of the blog was to post pictures of my travels for the family to see. Well, here I am with the family! I doubt they want to see pictures of it. So, I'll have to make some stuff up!

Anyway, California City isn't a total hellhole. The Mojave Desert is kind of cool if you can get a little bit outside of town. There are Joshua Trees all around. From the time I used to rock climb in Joshue Tree National Park (pre hang gliding, of course), I have always thought they were the most beautiful desert trees, in a bizarre way. Apparently they are native only to the Mojave and Sonoran Deserts. Here's a really nice shot of a Joshua Tree - not mine, I just found it on the internet.
at 10:01 PM No comments: