Land of the Komodo

My younger brother Mathew has a higher IQ than the rest of the family combined. Growing up with all these extra brain cells, he would go through stages being totally obsessed with one thing or another, usually related to the natural sciences.  Before the geology stage, he was so into reptiles and amphibians - I mean, the whole world revolved around lizards, snakes, geckos, skinks, you name it, if it slithered, he loved it.  Somehow from that came my obsession with someday seeing the Komodo Dragons.  I have my own list of strange obsessions that include these giant lizards, the Panama Canal, the pyramids, Macchu Picchu, the Great Wall of China, the Serengeti, etc., etc.  Some I’ve seen and others I will see at some point.

Last week, thanks to an expiring Australian visa, I had to leave Oz for the CIVL Plenary meeting 10 days early.  What to do, what to do??  When I realized how close I would be to the Komodo Islands, I knew what I had to do.  Sadly, Matt couldn’t come, so I had to do it on my own.

Getting to where the dragons live takes a bit of island hopping.  I flew from Sydney to Bali, then took a flight on a prop plane to the smallish town of Labuon Bajo on the island of Flores.  From there, there are only boats to get to the Komodo Islands.  I took the two and a half hour boat trip to the island of Rinca (pronounced like Rincha) and the Komodo National Park. 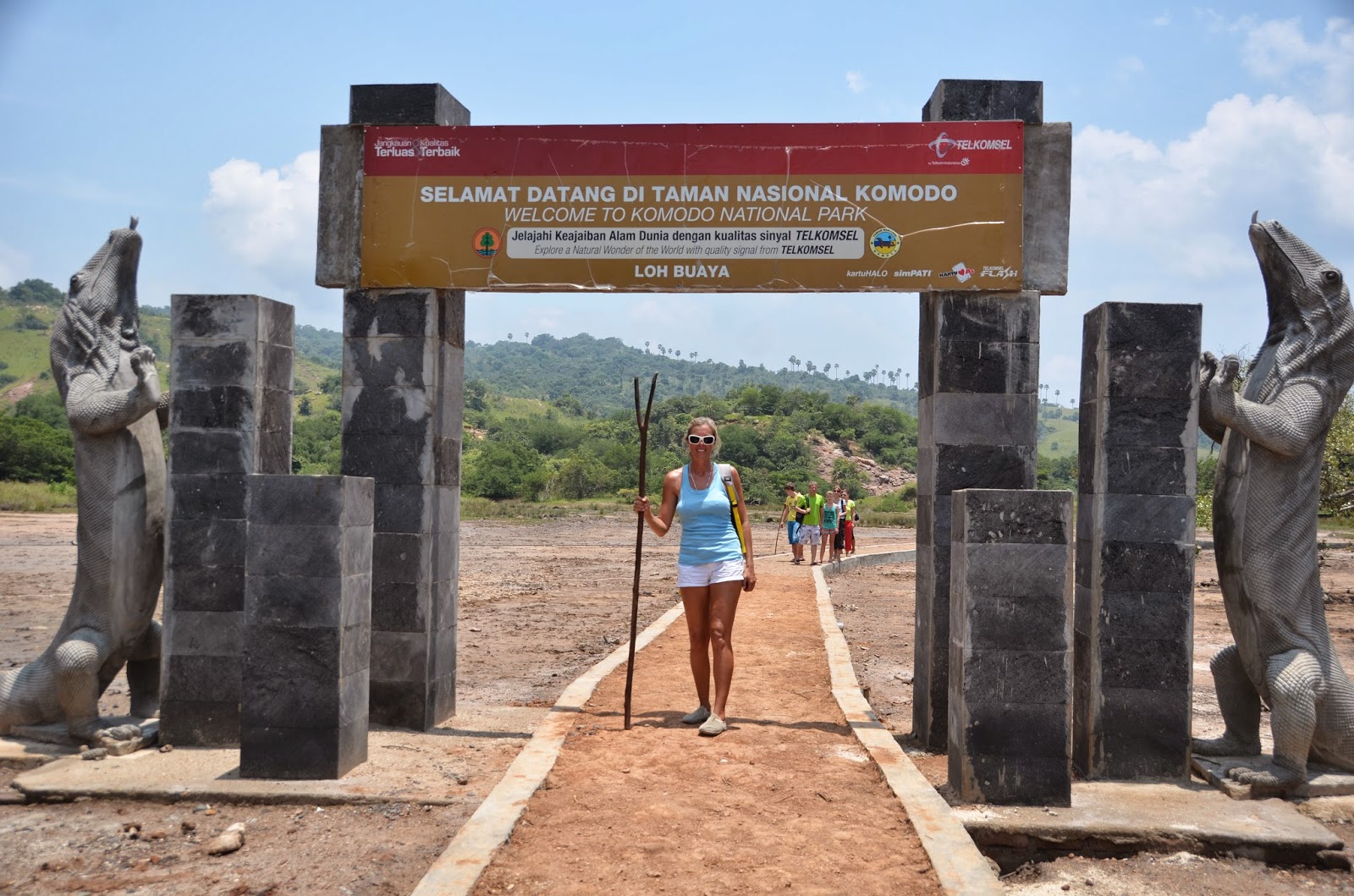 The tour people warn you that there is no guarantee that you will see any dragons, much less any “in the wild.”  What I read online is that it’s pretty common to see them hanging around the camp (the small visitor’s center at the national park) because they smell the people food and hang around there.  But, of course, I wanted to see one in the wild.  The funny thing is that there is nothing the least bit “tame” or less wild about the dragons around camp, but somehow it seems cooler to see them away from camp, out in the bush.  Really funny thing is that the most active one we saw - the one that actually started moving toward us and had our guide shuffling us away as quickly as he could, was actually at the camp.  The guide carries a long forked stick to stop an attacking dragon…but he admitted that sometimes the stick isn’t enough and that both he and his boss have been attacked (the boss was sitting in the office when the dragon came in for some lunch and it took several rangers to save him).  Lucky for me, I knew I could outrun at least one other person taking the tour, so I figured I would probably be alright. 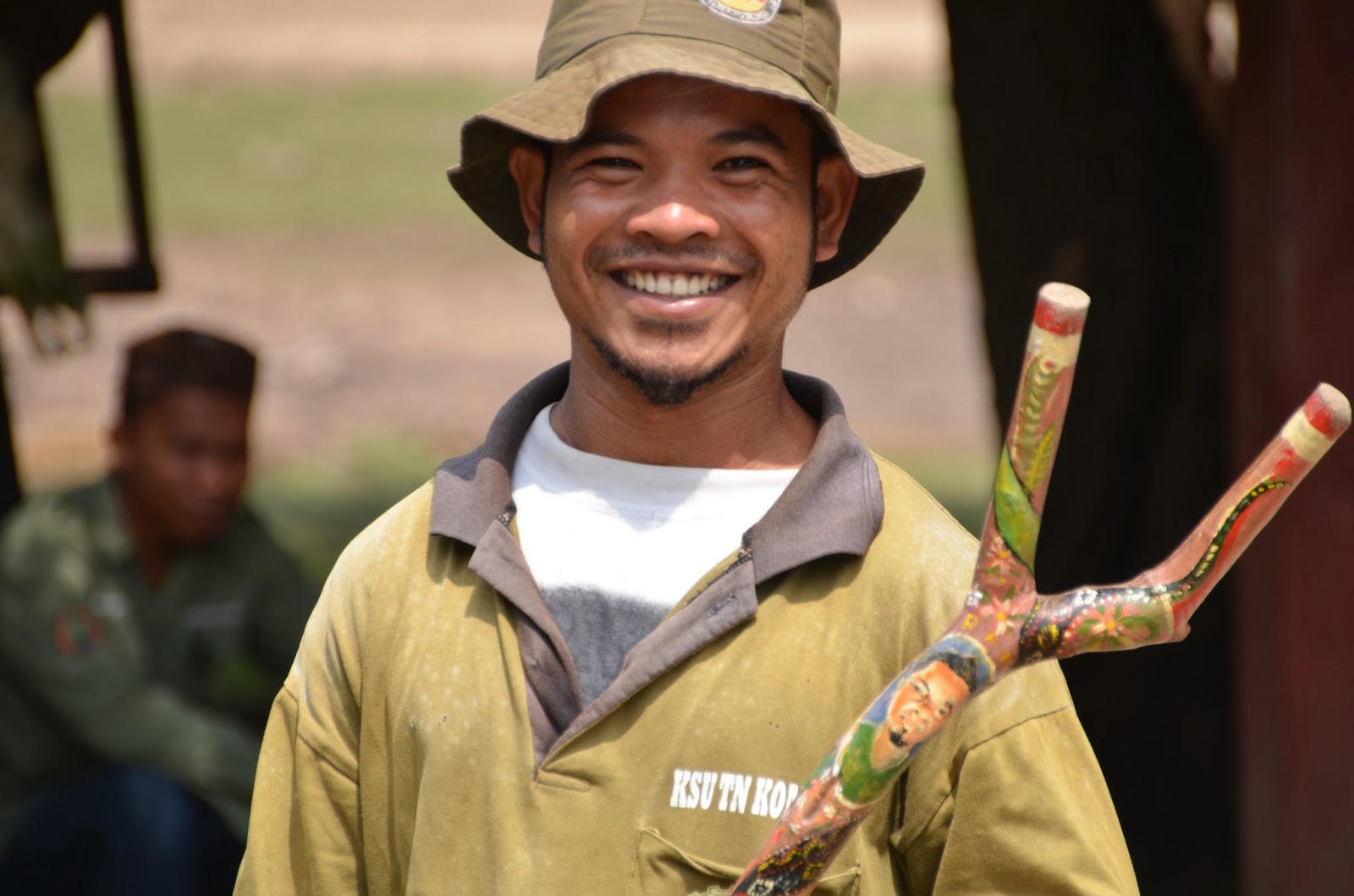 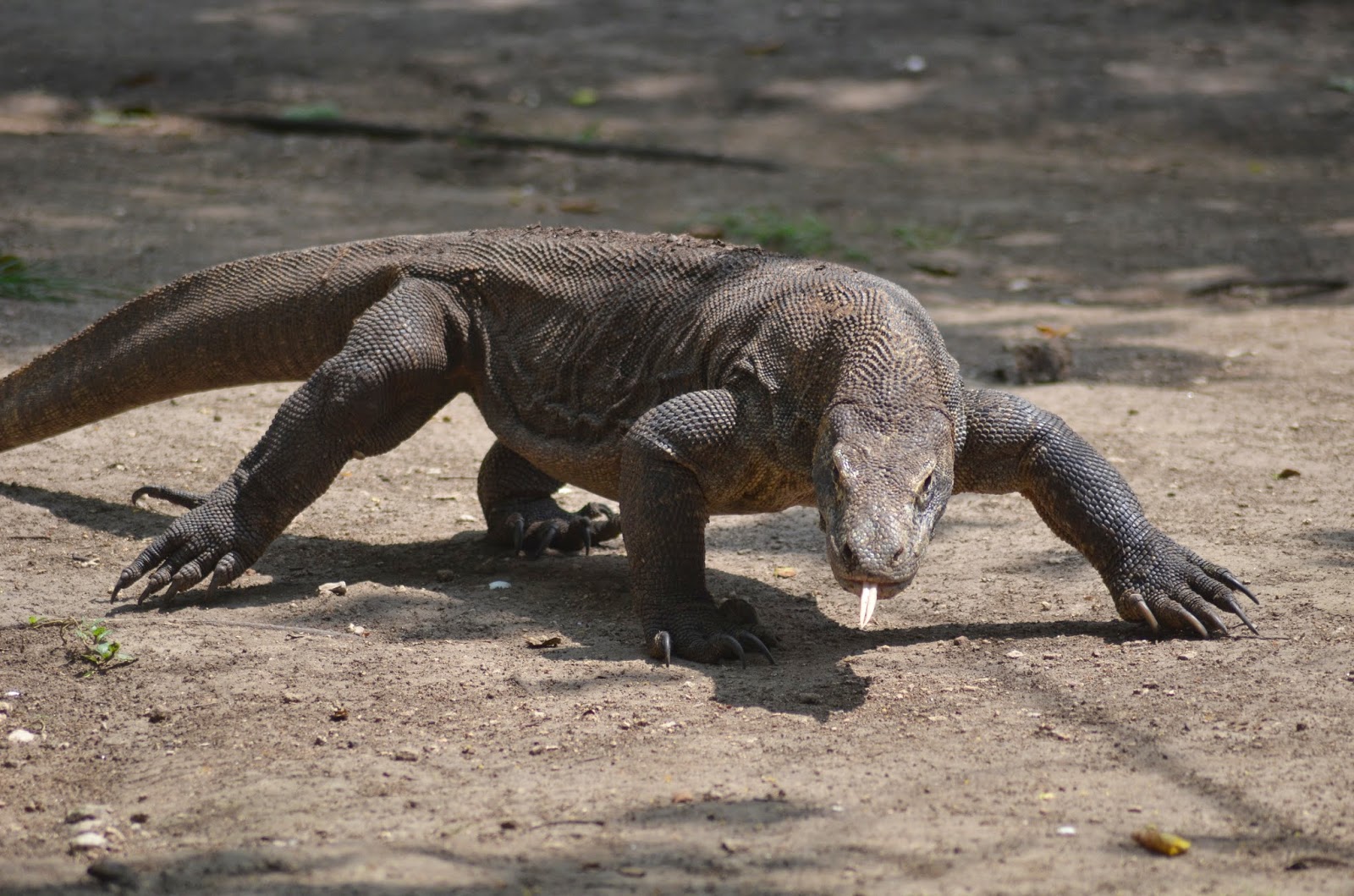 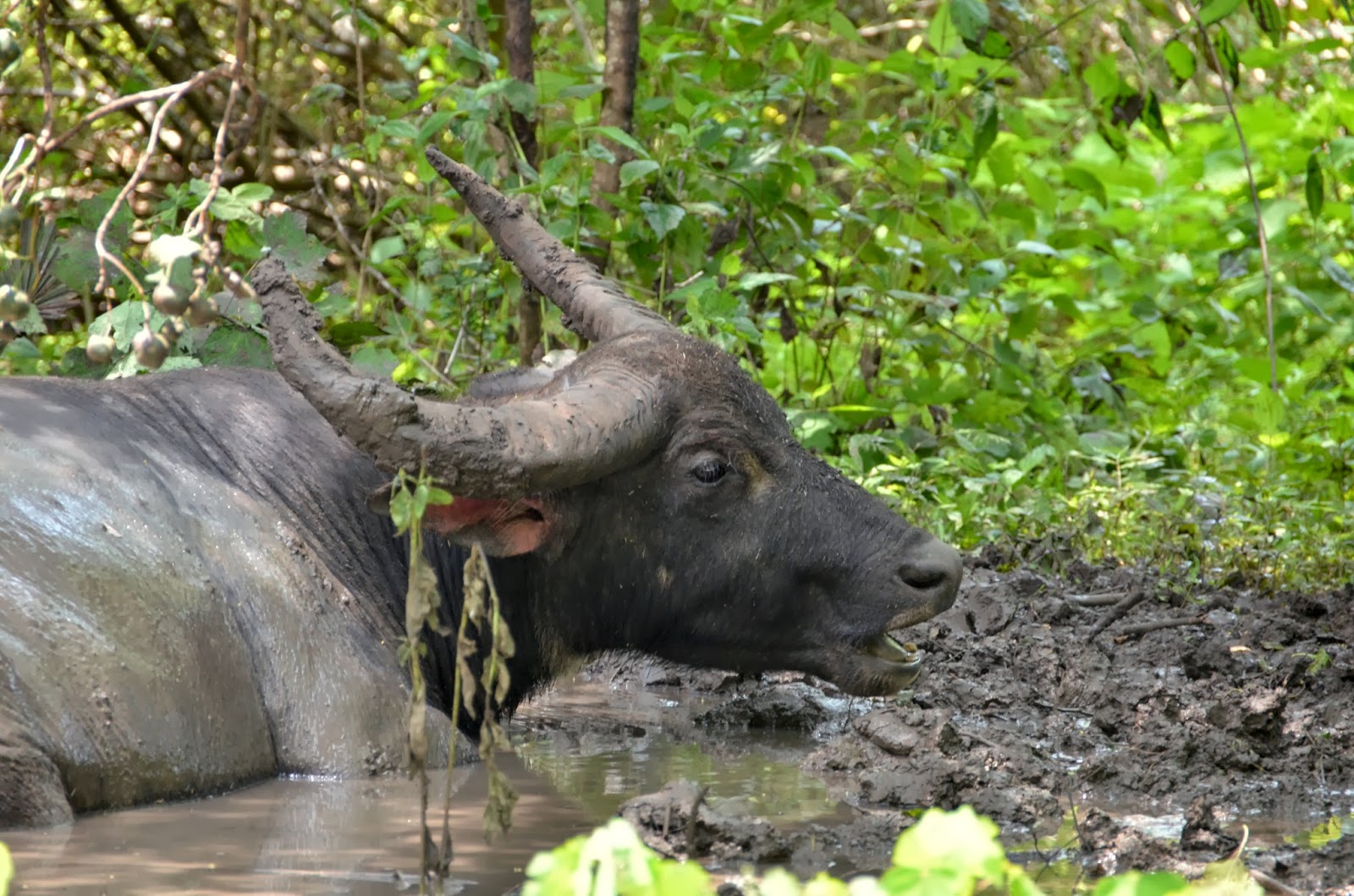 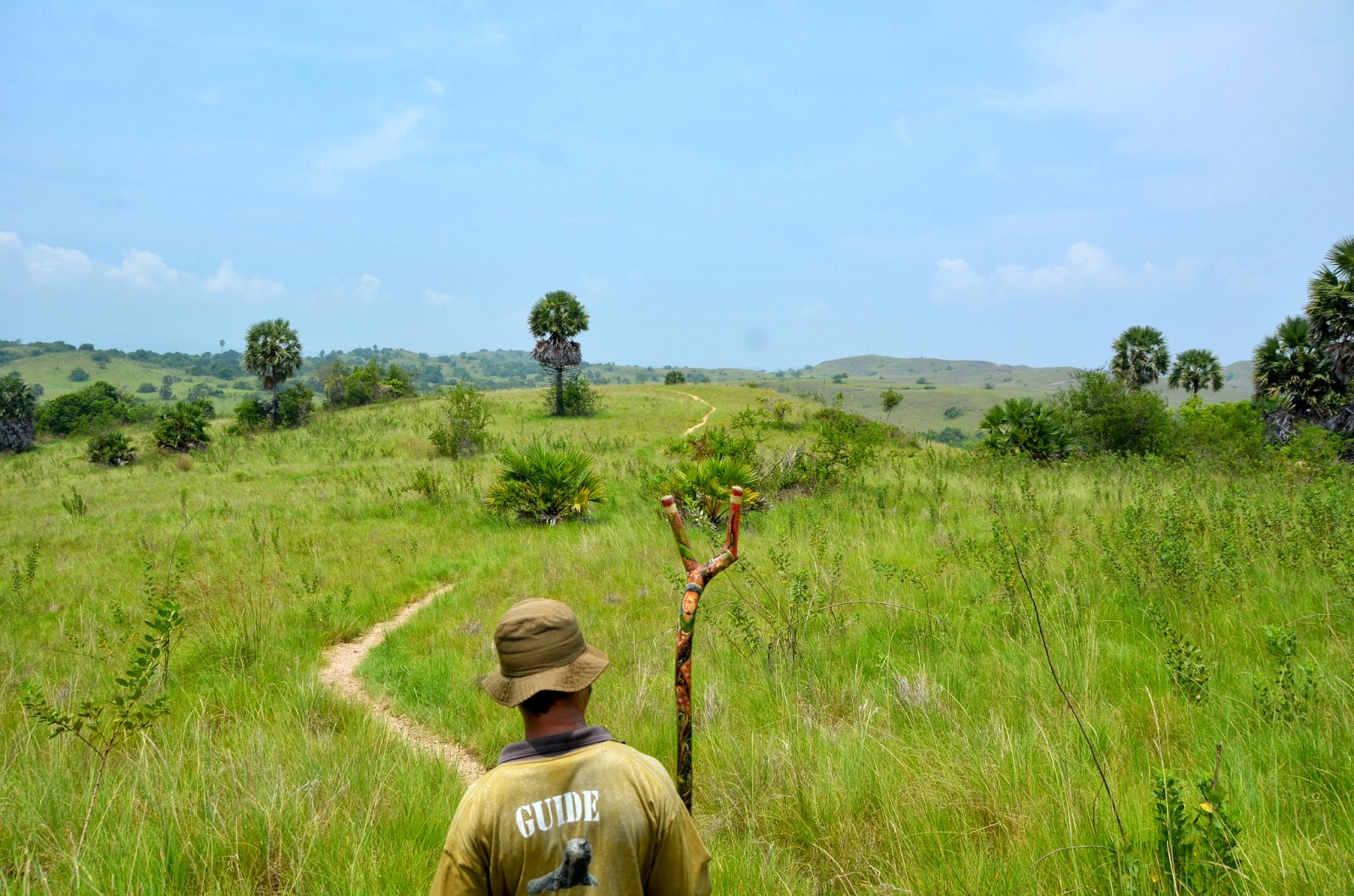 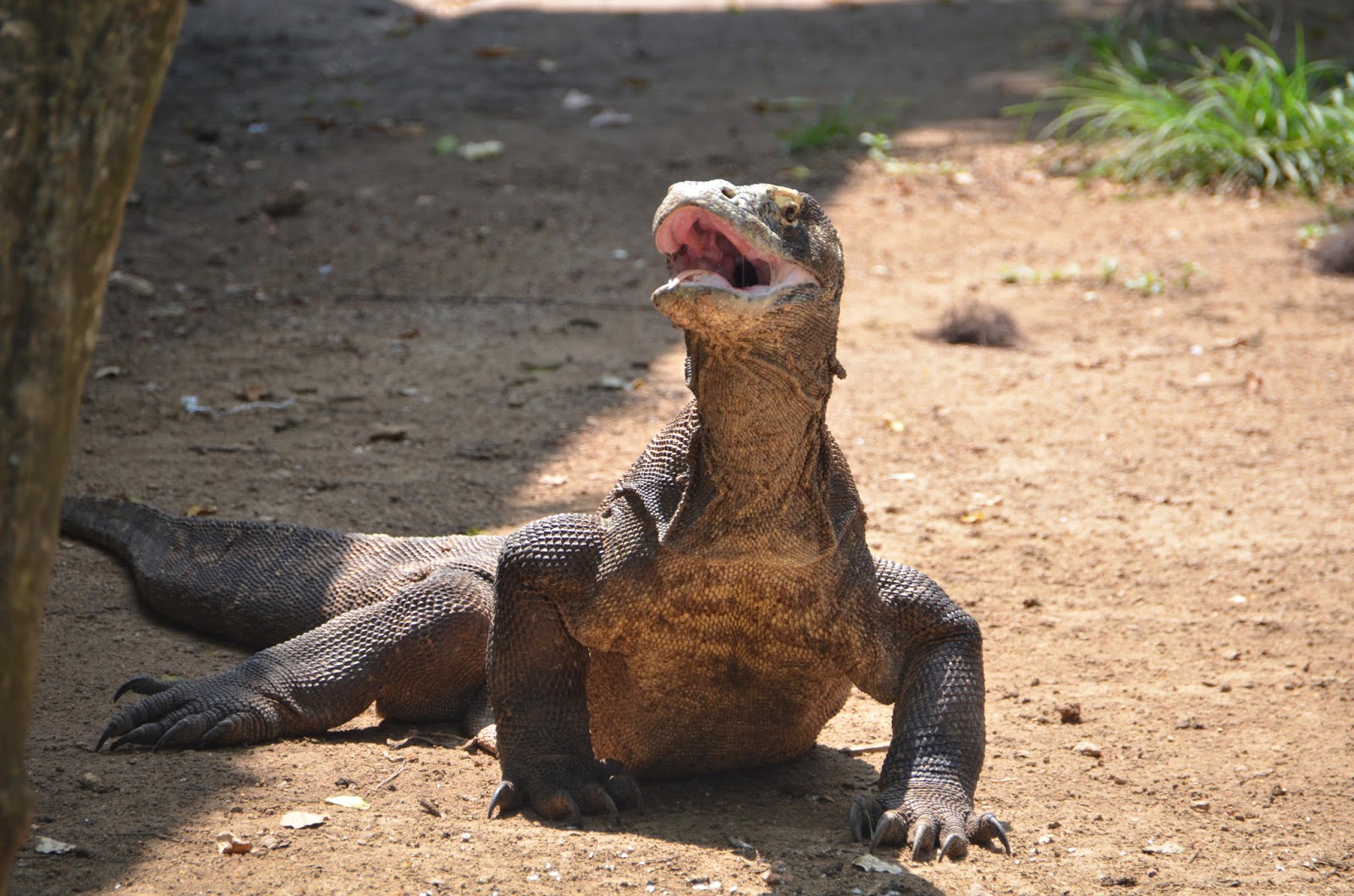 Day one we went for a three hour hike around the island and never saw a single one out there.  Kind of disappointing, but hard to complain when we did get to see water buffalos and monkeys and it was just a beautiful hike anyway.  But, I couldn’t stand the thought of coming all that way and not seeing any in the wild, so I took my chances on trying again for a second day.  Good move!  This time we saw several in the wild, including one digging up the nest of a mama bush turkey and devouring her poor eggs.  From the relative safety of a tree about 3 meters away (I was later told by the guide that there are often vipers and cobras in the trees…doh!) we watched for 20 minutes while the poor bush turkey mama tried desperately to fill dirt into the hole the dragon was digging, covering his back with dirt and leaves and sticks, but not slowing him down a bit.  Once he emerged from the hole having finished his appetizer, our guide thought it best to leave him on his own so that we didn’t risk becoming the main course. 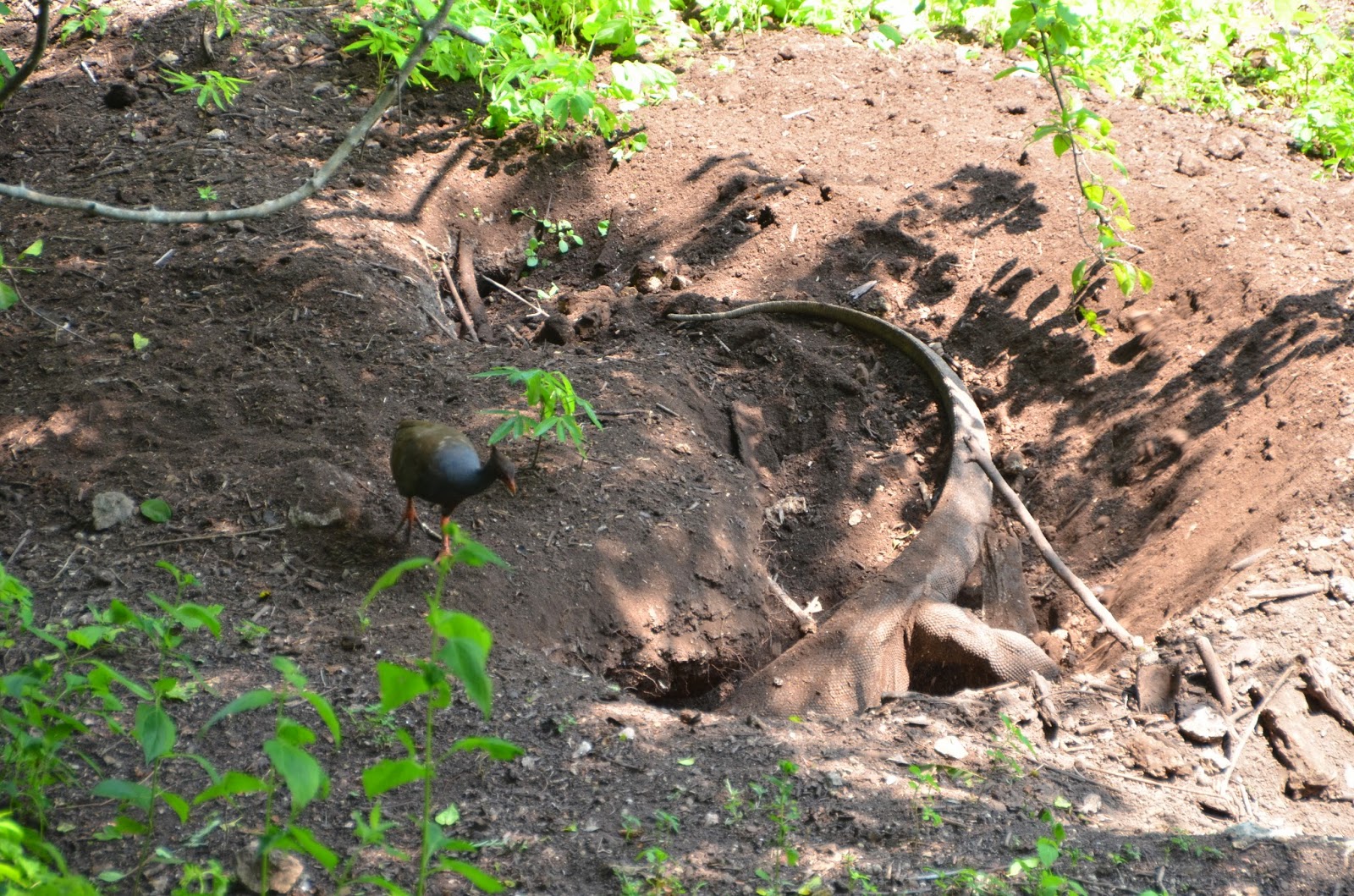 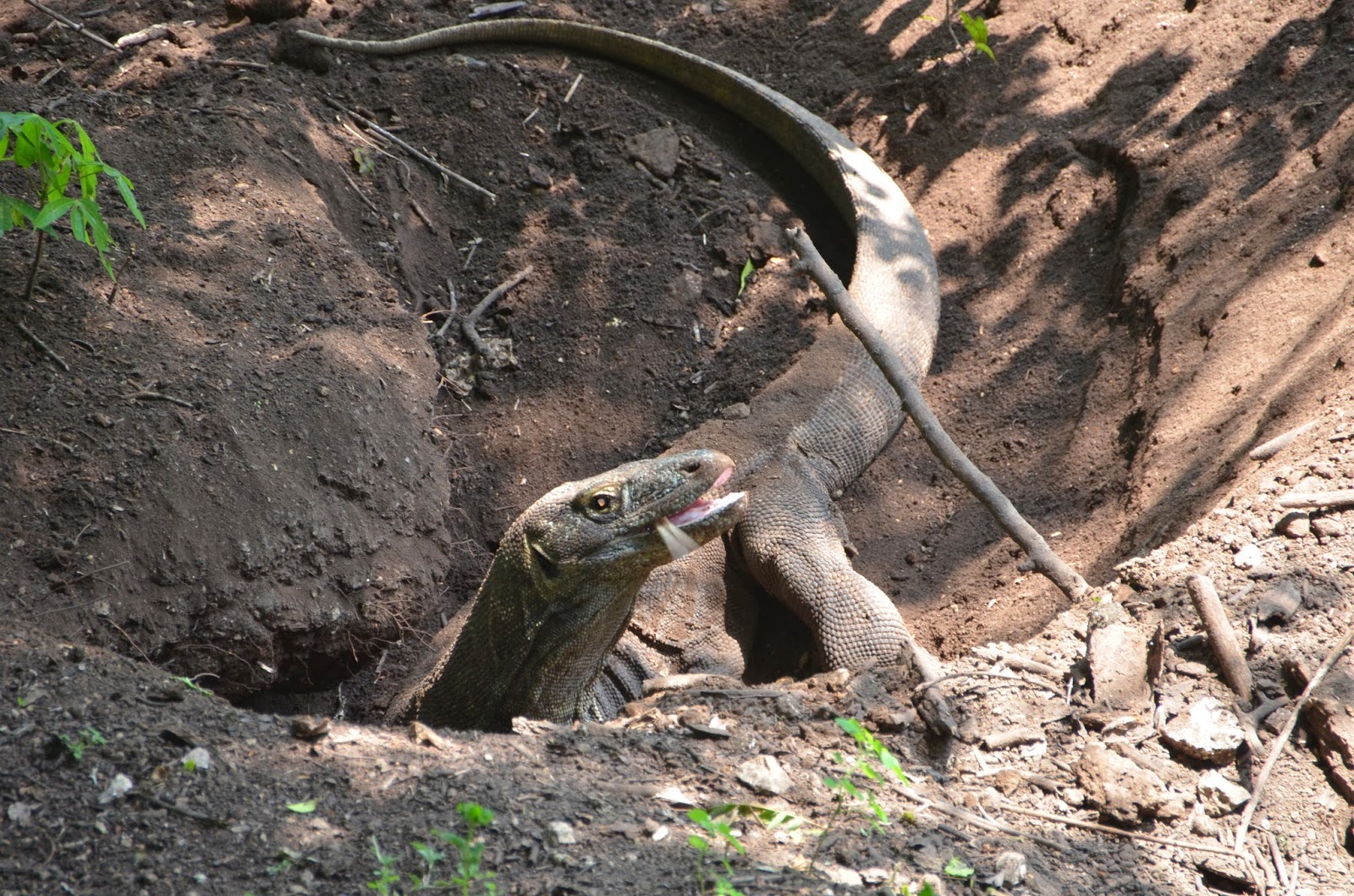 Not long after that, we came upon a baby dragon - about 3 years old.  He was about a meter long and didn’t look nearly as intimidating, so we moved in a bit closer.  Apparently, it takes some years before the dragons have the bacteria in their saliva that can infect and bring down a 500 kilo water buffalo.  Of course, that meter long baby still has razor sharp teeth and would be happy to take a chunk out of your flesh if you got too close. 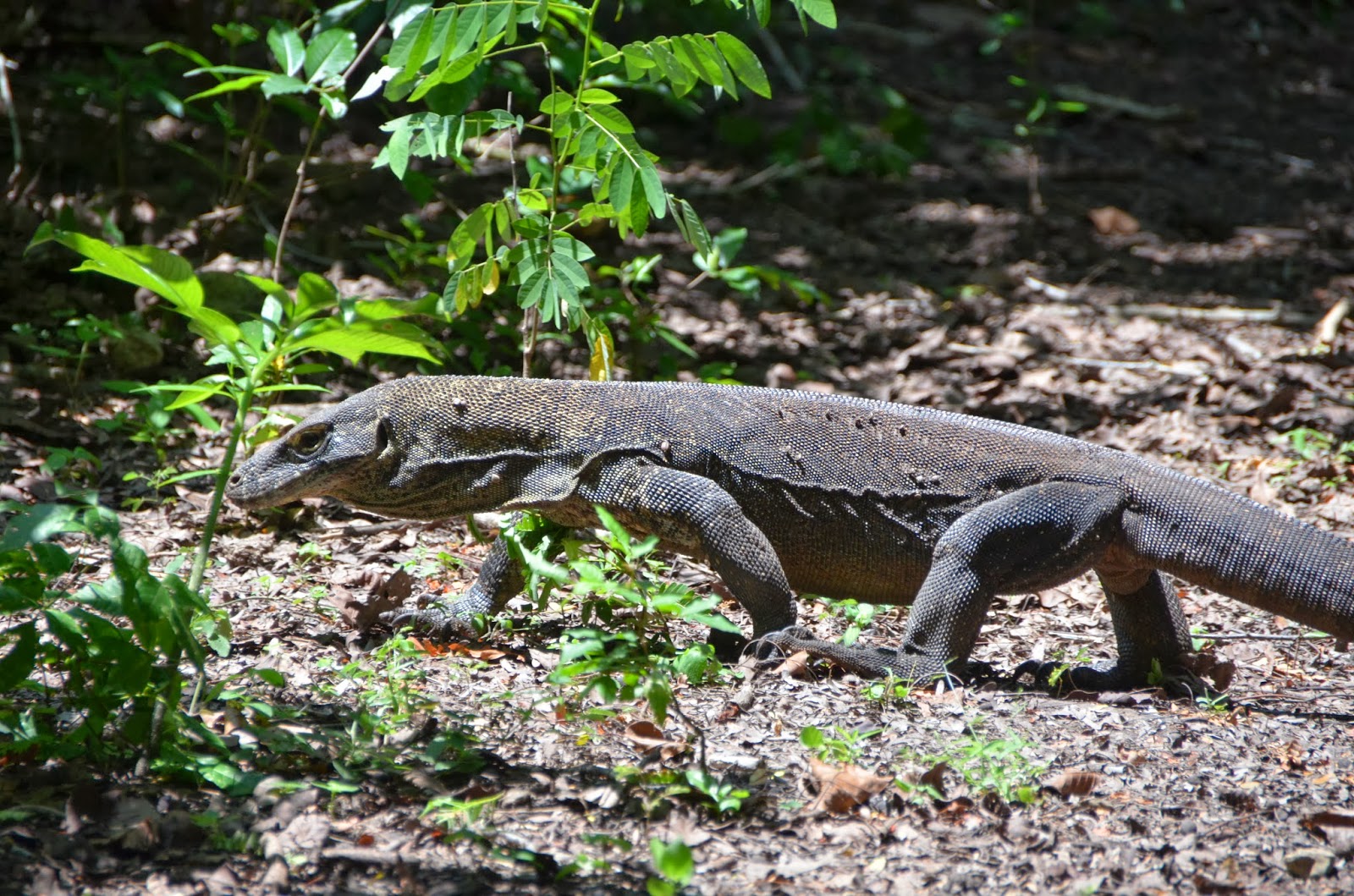 We were also lucky to see a very small baby dragon back at camp, hiding in the bathrooms (very happy I didn’t need to use one!).  The Komodo are cannibals and will happily eat the babies….even the mother will eat her own if she’s hungry.  So, the babies’ only defense against being a meal for the relatives is to hide.  He was not much more than a foot long or so. 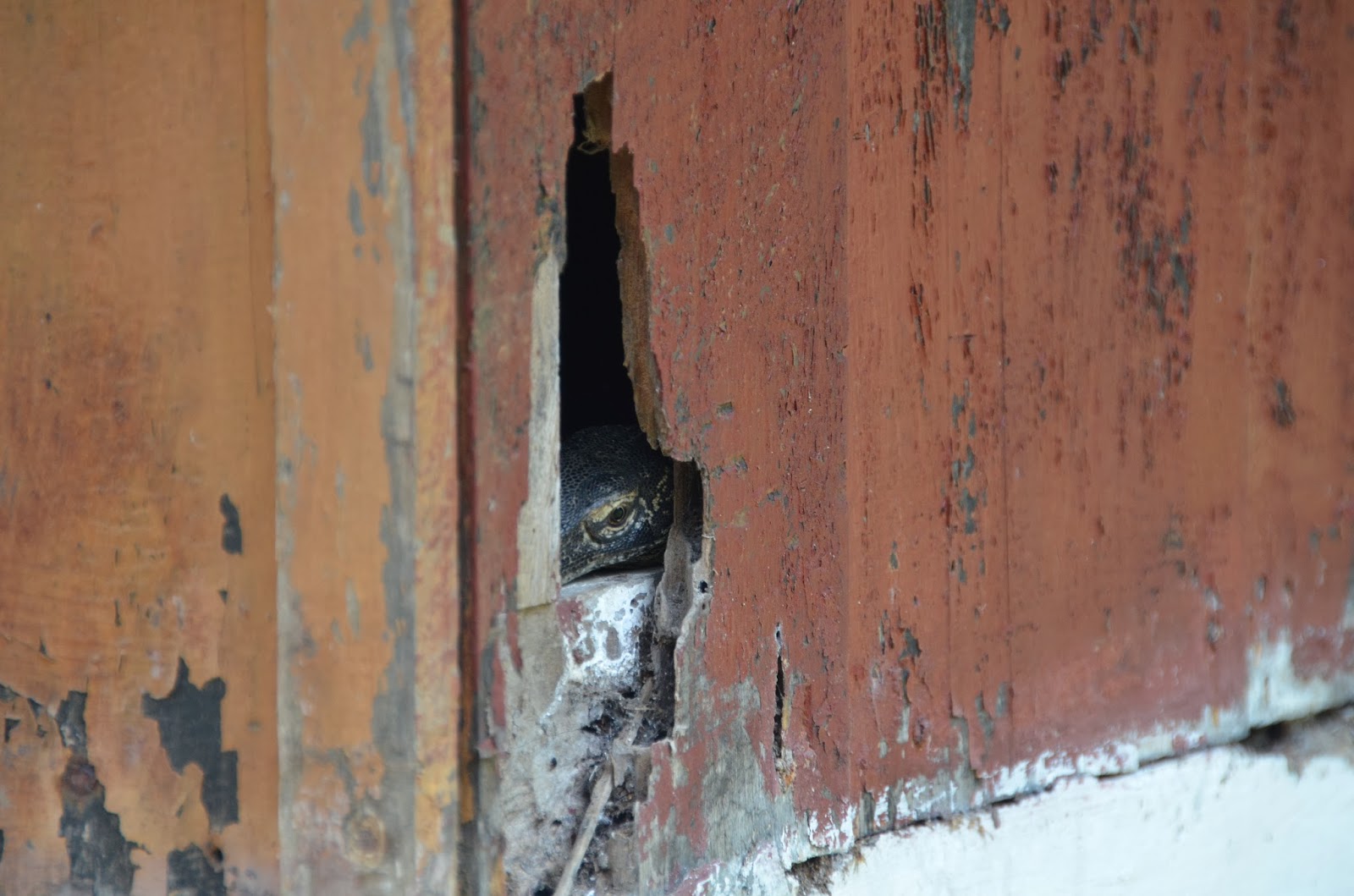 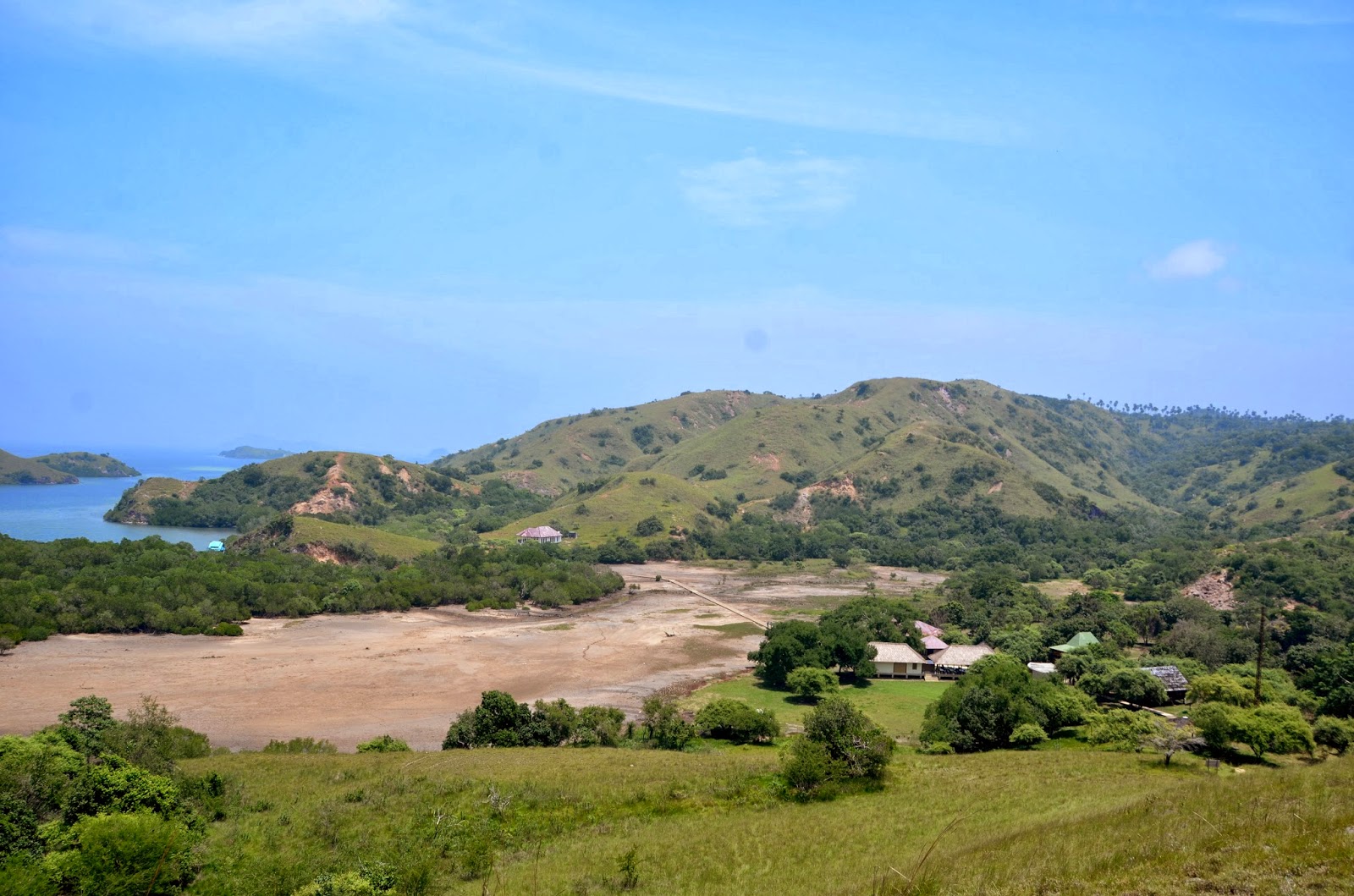 I can’t think of anyone I would have rather spent those days in the Komodo Islands with than Mathew (Mattias is very close second though ;-). Really missed you Mathew!
at 9:06 PM 2 comments: