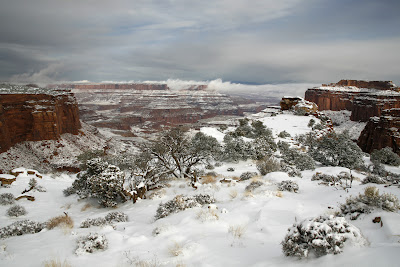 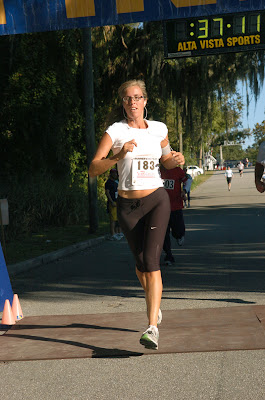 Ran my first race with my buddy Mitch last week. I had to knock over a woman with a walker to secure second place in the old lady division ;-)
at 1:28 PM 1 comment: 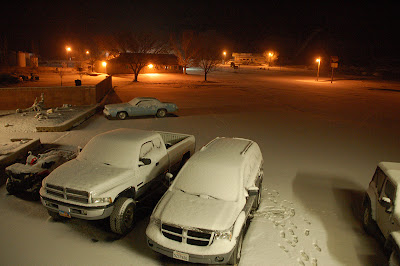 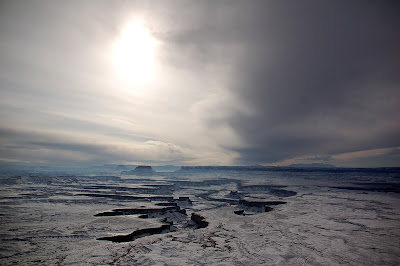 Toto, we're definitely not in Florida anymore. I left shorts and t-shirt temps at home to spend the holiday with Mom, Dad, my brother Mathew and his best friend Jonathan in the southwest. We spent Thanksgiving day driving from southern California through Vegas to Hanksville, Utah. The plan was to hike into Horseshoe Canyon on Friday. We just forgot to put in for a decent forecast. We woke up to find a few inches of snow on the ground. No worries - the forecast wasn't for snow - surely it would stop soon. So, we left the hotel at 5:30am to drive out a 20+ mile dirt road to the trailhead. I carefully wrapped my running shoes in plastic bags - this equivalated (that's for you Jonny ;-) to strapping little, highly unstable sleds on my feet. If it wasn't steep and slippery enought, this would ensure that I ended up on my ass at some point. I don't think we went more than 500 meters in very poor visibility before we all thought better of the whole plan. Dad and Mathew are both photographers, so the point was to get some good shots of the petroglyphs on the walls of the canyon. With so much snow falling, we couldn't even take the cameras out of our packs. Well, it was a fun idea anyway - maybe next year.

Instead, we toured the Canyonlands from the warmth of our gigantic $3.50/gallon gas guzzling SUV, only getting out long enough to take a few shots until our fingers froze and we could hop back in the cozy car.

Friday night we headed toward the Grand Canyon thinking we might find a bit less snow there. There was less snow, but that didn't mean warmer temperatures. The wind was howling on the rim and even down the Kaibab trail. With the wind chill factor, I don't think we even made it into the double digits - they called for about 8 degreed Farenheit. But at least the sun was shining and they guys could get some good shots.

My loving family couldn't resist giving me a hard time about bringing my phone into the canyon. Of course, all but Mom had theirs too. 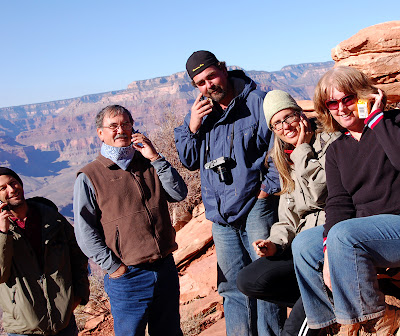 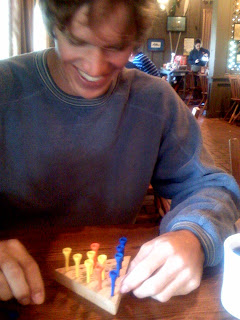 Carefree highway let me slip away on you 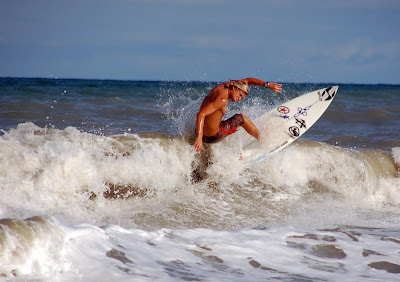 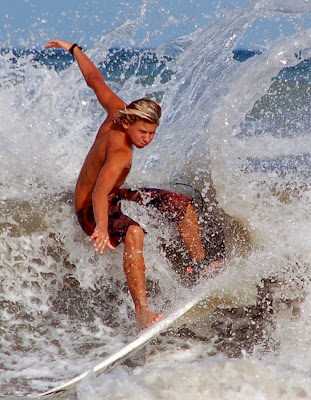 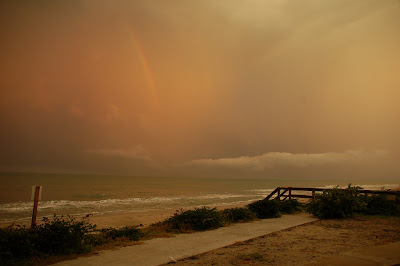 Dustin is visiting for a couple of weeks helping out with tandems at Quest. In between weekends, we're at the beach enjoying the scenery and working on my long punchlist. Dustin spent the whole day installing my baseboard....what a sweetie he is.

I'm learning about red tide the last few days. Red tide is caused by an organism brought by certain winds and Gulf Stream currents. The organism produces a toxin that can kill fish and in extreme cases, turns the water red. Apparently this is somewhat common in Florida in October and November - we should have stayed a bit longer in Ecuador. The beach smells nasty and with the doors open working on the baseboard all day, we were hacking and sneezing away. I hope it doesn't stick around too much longer. Either way, I still love it here ;-)
at 5:54 PM 1 comment:

Another Park(ing lot) Another Sunday

The drive back to Guayaquil was long and slow yesterday. We headed home along with half the country after the long holiday weekend on a two lane highway that turned into a four lane parking lot- with all four lanes going into town. Anyone who wanted to get out of town had to drive on the sidewalk....it was hilarious. Eduardo Sr. had his Sunday drive with plenty of natural air conditioning (aka no windshield!). On the way home from the party Saturday night on a dark street in Canoa Beach, he backed into a gigantic hole the town had been digging for days....and this was really a huge hole! I had seen it every day walking into town to the internet cafe and had even thought to myself that it was so big it could swallow a car. Well, it did. The SUV slipped in and rolled onto its top, breaking the windshield and denting nearly every panel. It took 5 guys, 2 4wd cars and 3 hours to get it out again. The next morning they dusted it off, loaded the gliders on and put it back into service. 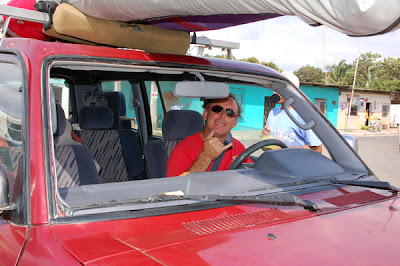 All week in Canoa we watched two birds in a cage hanging from our patio. They belonged to one of the caretakers of the hotel and each day he would open the cage that was barely big enough for them to turn around and toss a piece of fruit in for them to eat. It was breaking our hearts, especially under the circumstances. We were out flying our butts off all day, every day and they were trapped in there. So, Dustin headed up the effort to free them. We all pitched in a little and offered the caretaker $50 for the birds and the cage. We loaded the cage into the back of the truck and headed far enough out of town that they wouldn't be found again. We freed them out on a dirt road we had flown over every day...all the while thinking they might immediately be snached up by a hungry hawk. Still, it seems a better way than the imprisonment they endured before. 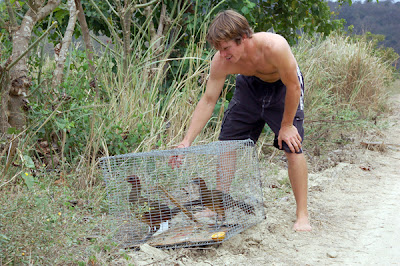 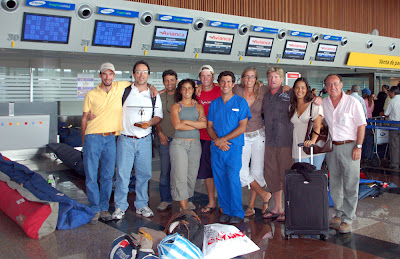 We're back in Guayaquil after a fantastic final day at the Canoa Open. After light winds early on, we had to push the start back to 5pm to make sure everyone had time to get in the air. As always, the boys raced all the way till then end, despite the lighter than normal conditions. Claudia and I were mostly just concerned with not sinking out.

In the end it was Dustin first on a T2, Mike Glennon second on his new Litespeed RS and Raul Guerra third on a T2. Eduardo Sr., one of our hosts finished first in the sport class for the second year in a row. Chris Greblo and I were the top placing women in the sport and open classes.

Only 51 more weeks till next time ;-) I can't wait. I would encourage anyone who possibly can to come down next year. Just as I said last year, this is the most fun meet I have ever been to. It's relaxed racing with a warm friendly group of people that are becoming like family to me.

Here are a few of pictures by Mike's sweetie Sharon. 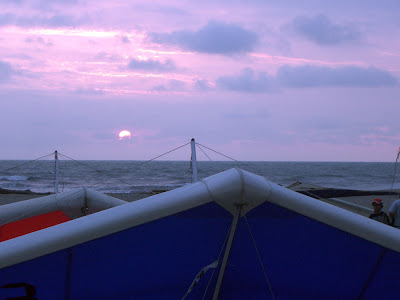 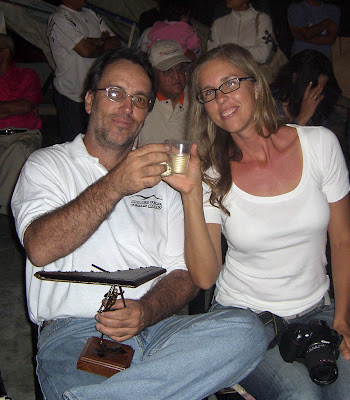 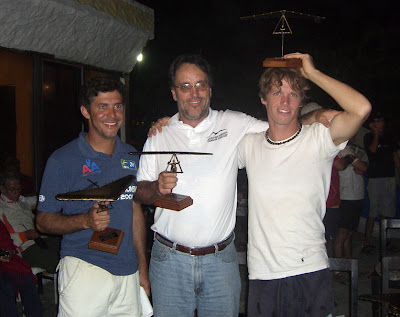 ....rain, rain, rain. Not exactly downpours, but enough that my instruments were wet and my gloves were eventually drenched from trying to keep my goggles semi-clear. Not enough to stop many from flying the course anyway. I didn't like the poor visibility, so I landed along with a few others thinking the day was cancelled. Turns out it wasn't, but would later be cancelled by the Meet Director (I think - it's hard to tell for sure around here ;-) 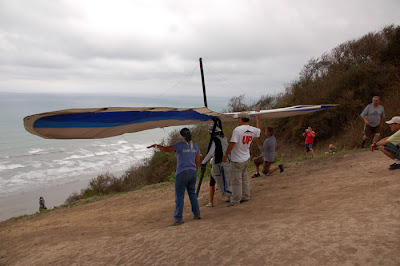 If for some reason it isn't cancelled, Mike Glennon won the day on his Litespeed. According to Dustin, his gps coverage went out at the start and again at the first turnpoint, so he didn't want to chance not getting them and flew further than he needed to and this enabled Mike to pass him up.

Still no scores, but tomorrow is the last day and tomorrow night the prize-giving, so I guess we'll have scores then. 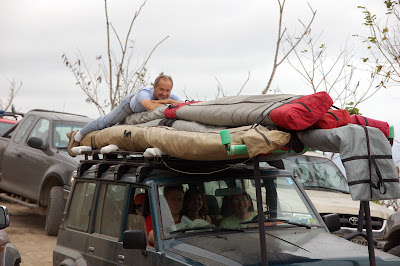 Great race day yesterday! The ceiling lifted slightly from the day before and the winds picked up a bit more strength...just perfect conditions. I don't have any official scores yet (they were having cable difficulties last night), but I do know that Dustin won the day on his T2 and Colombian Mike Glennon came in second on a Litespeed RS. They are pretty closely matched I would say. Only problem is that Dusty has this knack for getting a perfect start and that is so much of this race. In this entry start (or is it technically an exit start??) you have to enter the cylander via a wingover precisely at 4:30 and then take off full speed down the ridge. Dustin is a master at this and I think he will be hard to beat.

For anyone interested in the G v M (or M v I, or J v C, or however you want to look at it) race, I am relieved to report that I beat Claudia ;-) We both had pretty pitiful starts, but her's was much better than mine, so I had to do some catching up on the first leg (pretty easy on my lightning fast Litesport ;-) When Claudia saw me overtaking her from above, she stuffed the bar a bit too much and nearly landed halfway into the first leg. But, she stuck it into the ridge and managed to get up again, but by that time I had gained maybe 10 minutes on her that would be really tough to make up. 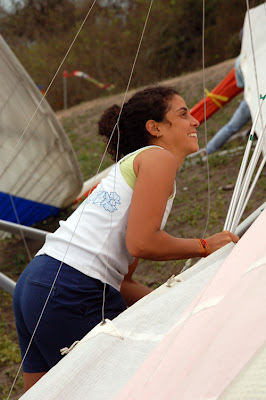 Fastest times are generally in the 35 to 40 minute range. I think I was at about 50 minutes yesterday, so I have some serious improving to do. I hope to have scores later today. 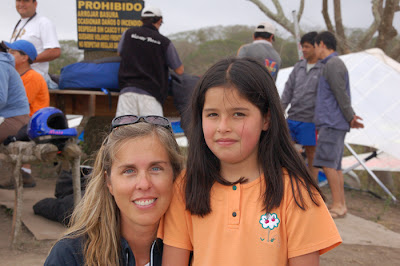 Here's me with my biggest (probably only ;-) fan! 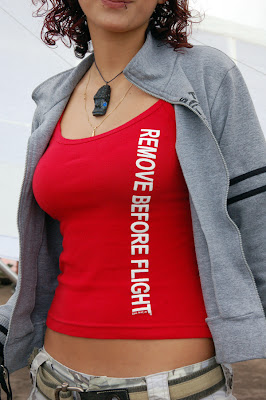 The Race is On!

The race starts today and we're hoping for improved conditions. We've had two practice days in lighter than normal winds. I like it this way ;-) Unfortunately, yesterday we had a very low ceiling and I spent half the flight way out over the Pacific trying to stay out of the pea soup.

A big group arrived from Quito yesterday with some more Americans. Joe and Chris Greblo are here along with Scott Orland from LA and Scott Berry who came last year. It will fun to have some competition for the top female spot. This year we are four instead of just two.

Another Litespeed showed up yesterday, so we now have 3 Moyes gliders in the race!! But, we are definitely in Wills Wing territory here. 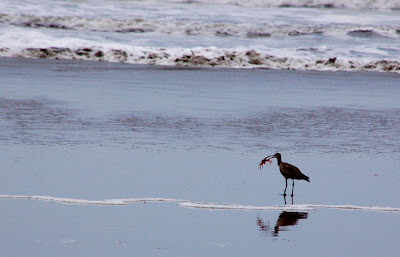 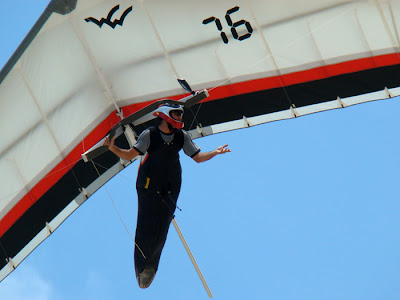 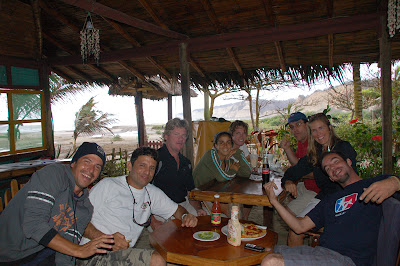