Forbes Worlds - Day.....something or other??

I've lost track of the days and I've run out of good stories of my own.  The last few days have not been my favorite and all I can do is hope for a few more nice flights before the comp is over.

But meanwhile, Frances from Switzerland had a hilarious story from yesterday's 250km task.  The story was fantastically told in French and then translated into English by Christian Vioblet, so it won't be as good here, but it is worth retelling.  Apparently Frances landed short of goal in the middle of absolutely nothing.  He pulled out his mobile phone to call his driver, only to find that he had no coverage.  No problem, there was a grain silo nearby with a ladder up the side.  So, he climbed it and at the top had coverage.  Unfortunately, his driver simply couldn't find him.  Frances waited on the silo until after dark until he started to see headlights coming his way.  Very excited to be found, he started flashing his camera flash to get his driver's attention.  But instead of continuing toward him, the car suddenly stopped and started shooting at Frances!!  When they car load of kangaroo hunters finally realized that most roos don't carry flash cameras, they were kind enough to give him a ride out to the main road, getting him past about 8 locked gates and out to his driver.  The Swiss team then slept in the car at the gas station.  They arrived home this morning after sunrise.

Lots to tell about yesterday's task, but no time.  Instead, here are some photos for now.

All the fighting roo pictures from yesterday...

Today's flight was complete crap.  The wind was again much stronger than I am comfortable towing in, so I waited (again) until late in the day when conditions appeared to mellow a bit.  The story of my flight will be as short as the flight itself -  Uncle Rhettski towed me up into the most beautiful 700 up right over the field.  20 minutes after topping out in that, after not hearing a single beep on my 6030, I was standing in a field just down the road holding my nose wires hoping I could keep control of the glider in the gusty wind while I waited for Mike to come get me.

(On the really bright side, Kraig's moving the hangpoint forward one hole on my glider made a world of difference in the bar pressure and I was thrilled with the way it flew...and it still landed like a dream.)

But, the real highlight of my day, and the thing that brought my smile back was an incredible spectacle we saw driving out a little dirt road to retrieve Linda.  Right smack in the middle of the road we found two male kangaroos acting like they were on center stage at Caesar's Palace in Vegas, throwing punches and kicking in the gut mostly like two ultimate fighters - but occasionally like two drunk girls in a dive bar.  For some strange reason, I laughed hysterically the whole time. They eventually danced their way out of the middle of the road and paid no attention as we creeped the car closer and closer until we were right beside them.  I suppose it was that they looked like they were right out of a Warner Brothers cartoon....they just looked so animated and nearly human-like.  It was a fascinating and highly entertaining sight.   I didn't get any good kicking shots, but Mike got most if it on video on his iPhone. 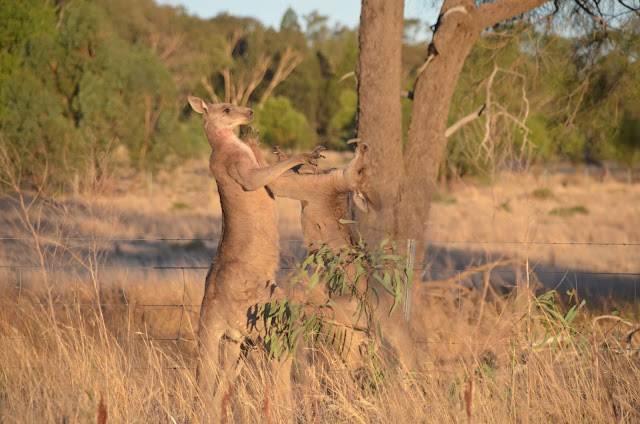 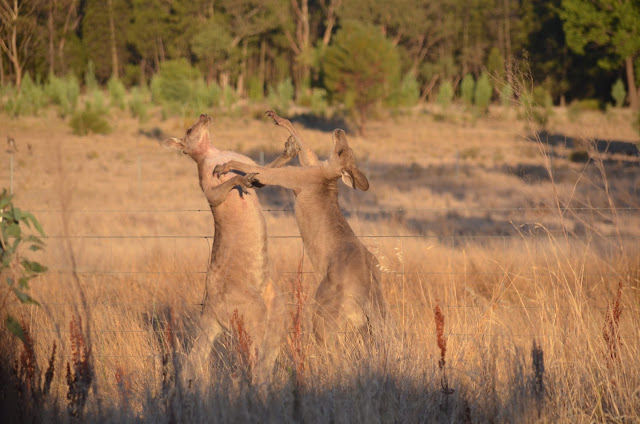 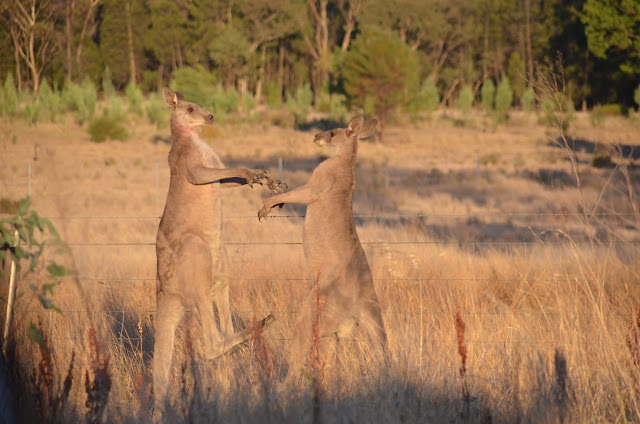 At last some clouds in the sky today!!  Unfortunately, they came with 30 knot winds.  The task was cancelled early and Vix organized a lawn bowling/BBQ day.  Hopefully tomorrow will be better, but I'm hearing grumbling already that it will still be quite breezy.  But at least cloudbase will be low and lift will be weak and broken ;-)

Well this is very strange for me.  For the first time in a long time, I'm competing so I can't do much in the way of tweeting and blogging about the comp gossip and results and such.  Not being in the thick of things at goal every day means all I can do is write from my own flying perspective....which can be rather bleek much of the time.  But, oh well, here goes anyway.

Yesterday, as forecast, was quite windy.  The truth is, it was too windy for my comfort level.  Linda and I stood around launch all rigged, watching the wind increase and the tows looking rougher and rougher.   I definitely have a tendency to talk myself out of flying much earlier than I ought to.  I did exactly that yesterday.  Giant thanks to my great teammate Linda!  She convinced me that we ought to at least suit up, get the gliders on a dolly and just see what it was like.  About an hour after everyone else launched the wind started to back off and we got airborne.  Having my favorite tug pilot here from home is so comforting.  Jim gave me a beautiful tow in the super rough air and dumped me right into a beautiful mellow thermal.

My little RX (Maggie, she's named) handles like a dream.  Surprisingly, in many ways it feels so much like my Litesport, that it's like flying with an old friend....but one with much much lighter handling.  Although I have some issues with quite a bit of bar pressure (the opposite of what the other girls are experiencing), Kraig and I are working on that.  Meanwhile, I blame the landing characteristics for me being short yesterday....the problem is that it lands so magnificently that I just want to do it over and over again ;-).  It's amazing how it makes a flight so much more relaxing when you aren't nervous about landing.  In the end, I only flew 45km, but I was happy to be up in the cooler air and to actually get away from the airfield.  The lift was somewhat weak (for Forbes) and base was low...I don't think I got above 6000ft all day, but the first day jitters are out of the way and it's goal for the rest of the comp....ha ha ha ha!

On the girly end of things, we only had 7 girls flying yesterday as Lisa was sick with the stomach flu.  But, 4 of the 7 were in goal with the lovely Chisato from Japan first in for the girls.  Awesome job Chisato!!! 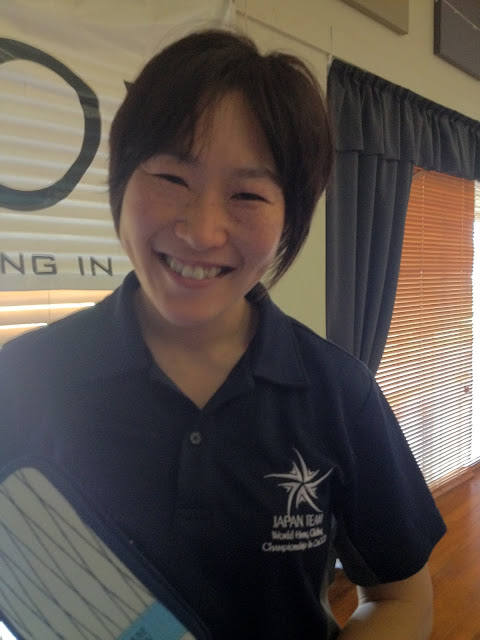 The US men's team got off to a rough start with Zippy landing very short.  I can say for the first time in history (and I'm quite certain the last) I beat him!!!  But they'll be fine.   All of the others American boys were in goal and the scores are all quite compressed for the top 30 or so it's still anyone's game.  Christian Ciech (Italy) officially won the day, but apparently only because Scott Barrett's instrument died and he had to use his backup Garmin which isn't set at a high record interval.  5 or 10 seconds difference is all it takes to lose the day win.
at 9:07 PM 3 comments: 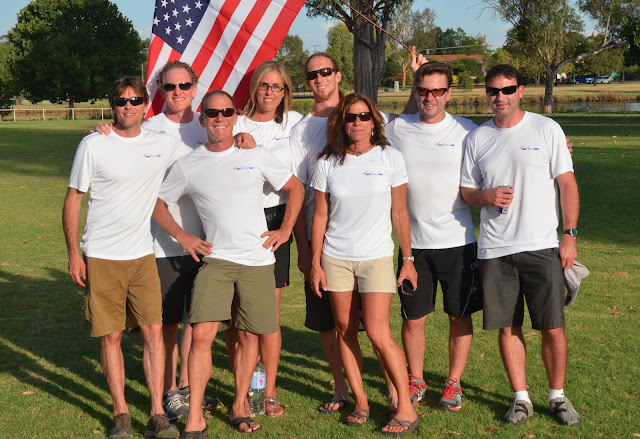 The Heat is On

Each day I think to myself that this is as hot as it can possibly get without my skin spontaneously combusting.  I obviously miscalculate because each day proves to be a bit hotter than the last and so far I haven't burst into flames.  A few more days though, and I'm quite certain it's gonna happen.

Many flew today after finishing registration.  Unfortunately, a lot of us also missed out not realizing that they would stop the towing at 3:30.  Here's Grant Crossingham from the UK enjoying the 42 degree heat of the paddock. 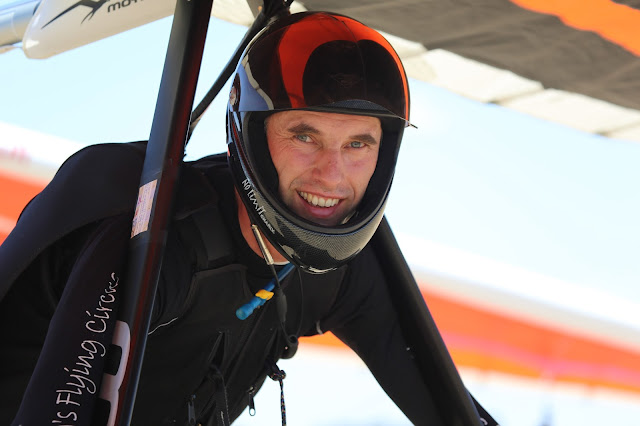 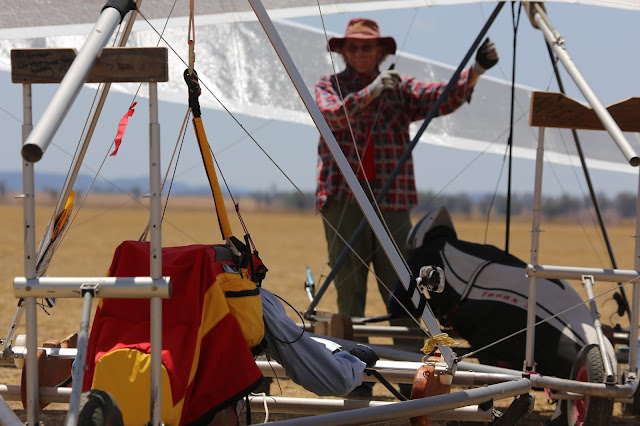 Yves and I had fun with the Redbull DJ station. 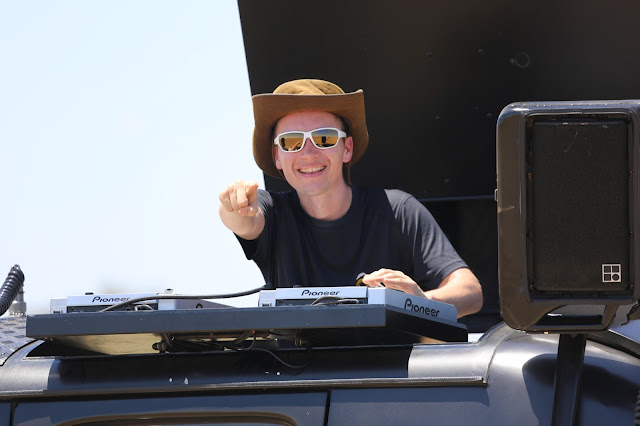 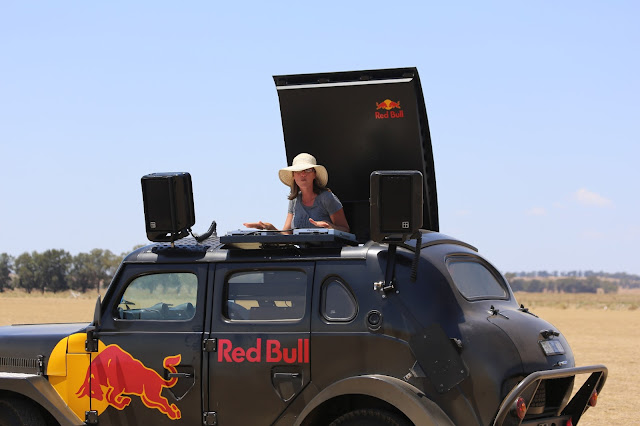 The Redbull Spotlanding contest was cancelled because we had high winds again this morning.  So, we're all at HQ getting registered up!

The comforts of home have started to arrive....nothing nicer than having your favorite tug pilots to ease you mind at a big stressful comp. 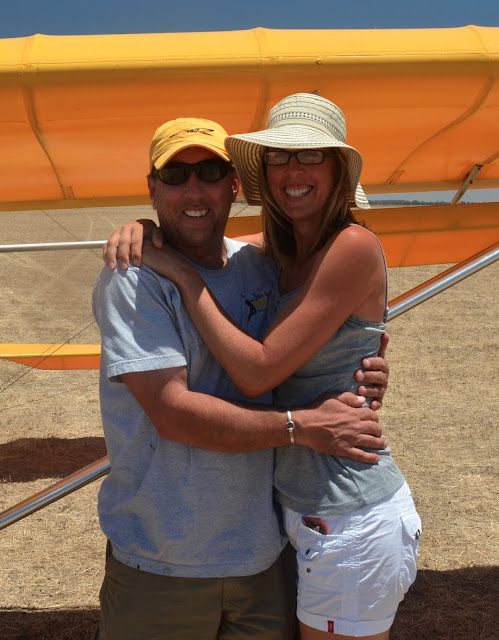 Apparently, it was quite nice this afternoon.  But earlier we all sat around the hangar waiting for the wind to mellow a bit.  Lots of standing around and catching up in the hot, hot, hot weather.  The last two of our US teammates - Robin Hamilton and Kraig Coomber arrived late yesterday.  It's good to have everyone here. 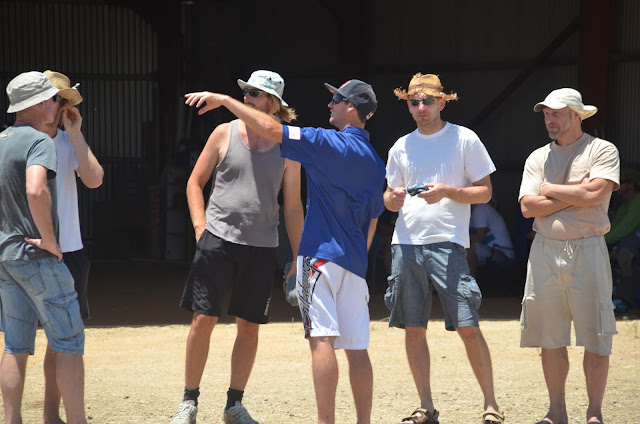 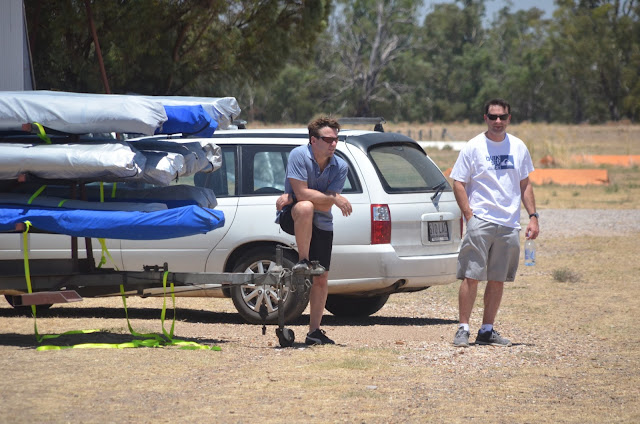 Maggie and I seem to have a bit of a love-hate relationship.  Today, it was definitely more love than hate though and we spent a nice evening in the sky over Forbes getting to know each other a bit better.  So finally, after moping around - just me and my bad attitude - watching everyone else fly, it's finally starting to feel like a world championships!! 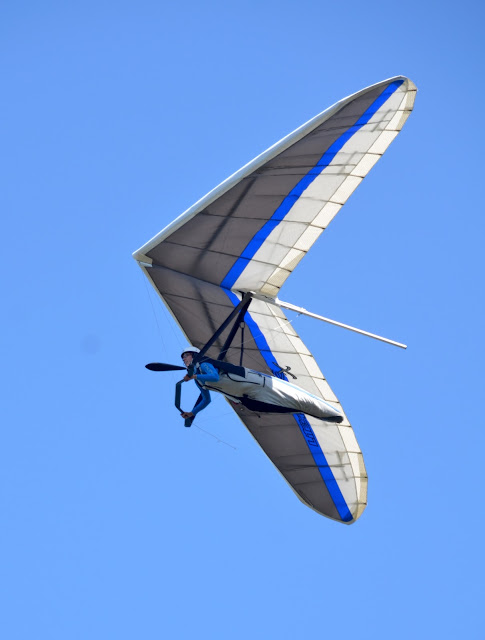 Here are a few pictures from the last two practice days.

Had a lovely and relaxing holiday season south of the equator.  The holidays sure do feel different in the warmth and sunshine.  Although we didn't have particularly summer-like weather on Christmas day itself, it's been gorgeous most every other day.  Christmas was spent BBQ'ing, slacklining and walking on the beach with good friends from far and wide.

The fireworks for New Years Eve in Sydney are spectacular!  We enjoyed them from Frasiers dock - what an awesome view of the Sydney Harbor Bridge!! 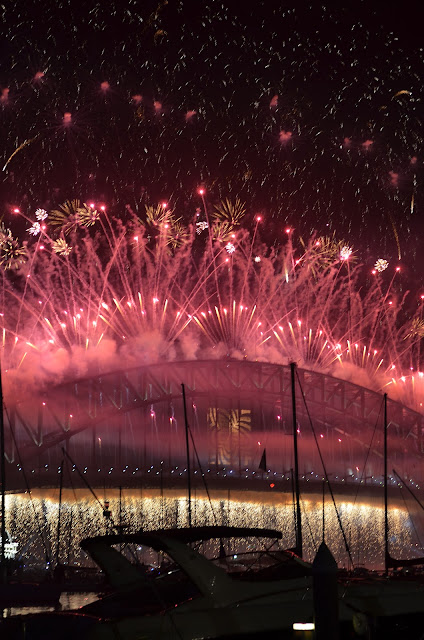 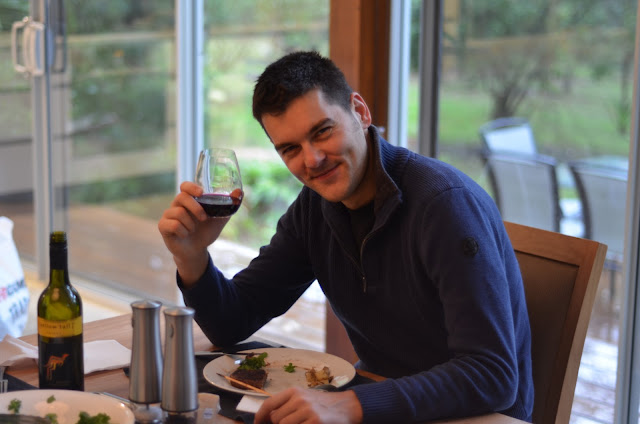 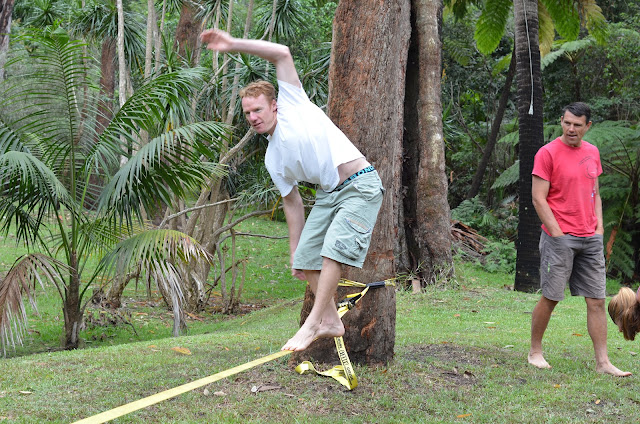 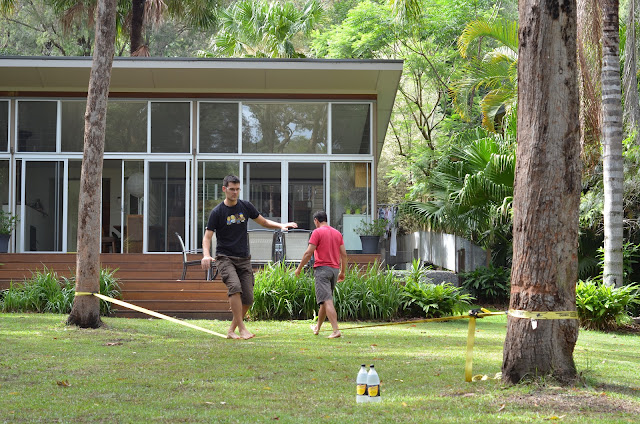 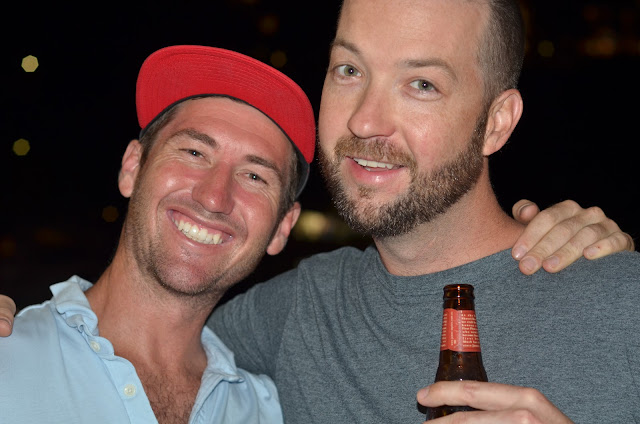 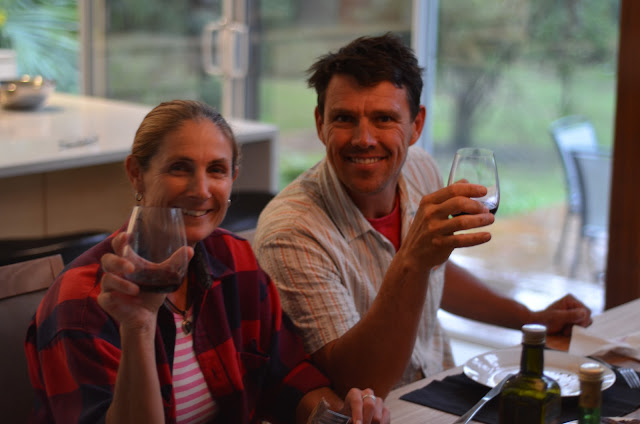 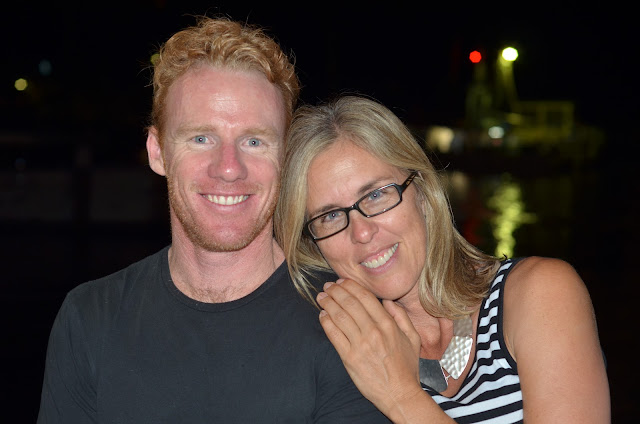