And it was all Yellow

Everything here is built of giant blocks of yellow limestone.  It all matches so beautifully. 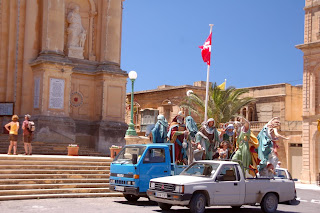 I arrived in the main square of Victoria (the biggest village on the island) just in time to see the saints come marching in.  They're preparing everything for a big festival this weekend - they being the townspeople, not the saints ;-) 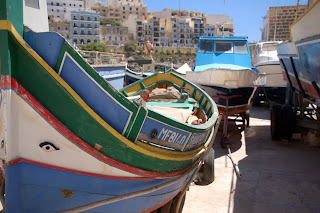 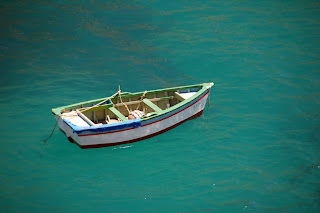 The only things that aren't yellow here are the vividly colored fishing boats. 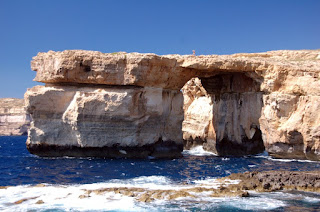 ...and the famous Azure Window,  of course. 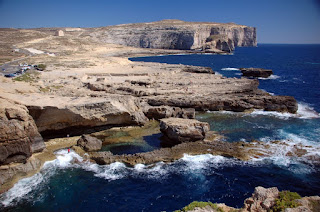 Filling in the missing colors in my paint by number dreams... 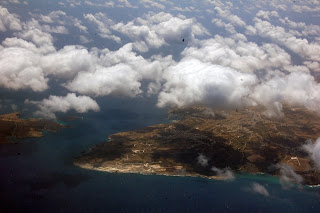 Kind of looks like a very elaborate movie set to me. 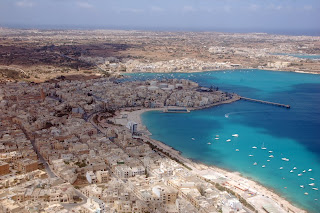 Wind was about 30 knots out of the west and I know there was a perfect cliff facing right into the wind.  Ah, but no glider.... 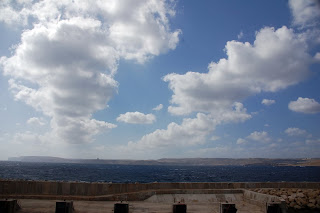 Having a lovely time in Bassano.  Each day here is very flyable and we've had such a nice, lazy time cruising up the hill to launch in the afternoon.  It's really nice not to be in a rush and not having someone else dictate where you set up, what time you set up, what time you launch, behind whom you launch, where to go....and on and on and on.  Sometimes not being at a comp is a good thing.  Timothy arrived yesterday and flew with us today.  It's great to see him enjoying some airtime in his Malibu. 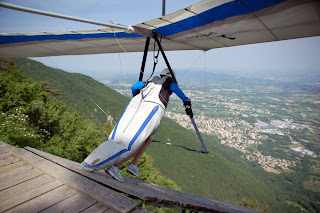 Carlos leaves to go back to work tomorrow and I'll be on my own for a few weeks.  I'm not happy about it, but I suppose I'll survive ;-)  Here he is flying over an amazingly huge monument at the top of the big mountains behind launch at Bassano.   We were told it was a monument to the soldiers that died in WW1 - the Monument of 1000 Souls...or something like that. 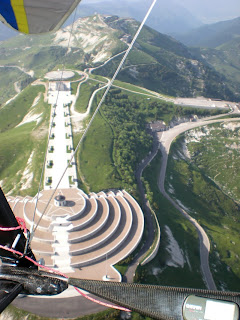 A non-pilot asked me recently if hang gliding is so great that a good flight can make up for the countless days we spend sitting up on a hill in unflyable conditions hoping it will get better.  After two weeks of frustration in the snow and rain in Tegelberg, we had one of those days yesterday.  Carl has been watching the forecast since I arrived just over a week ago, scoping out the best conditions for the various sites around here.  The weather has been quick to change and we've had several days that looked to be fantastic from a few days out, only to go bad the night before.   Yesterday the planets seemed to stay aligned.  Carl was so excited night before last that he couldn't get to sleep for lying there anticipating the great flight he had planned for us.
About noon we headed out to Moelfry, a little 1300ft ridge in north Wales.  There were a dozen or so paragliders out there, but we were the only hangies.  Carl laid out the map and started explaining in great detail where we would go across Snowdonia and the high mountains to the west, into the flats and across the Menai Strait onto the Isle of Anglesey.  There were some pretty decent mountain crossings and he wondered whether we would have it in us to go across no man's land with the high ground and not-so-happy landing options or if we would chicken out and take the safer route around the higher ground through a wide valley more to the north.  I chuckled to myself and thought "yeah, nice plan, but it will never happen."  Not to be such a pessimist, but it really did seem like a flight you only do in your dreams.   As we started suiting up, Carl realized he had forgotten his radio and had to use a spare in the car that only allowed him to talk to me, but not hear me.  Oh well, I thought, it's a nice idea, but a little cruise around here wouldn't bother me any, if that's all we got - it really is a gorgeous area.  To top things off, we had no retrieve....right, none!  Before heading out of the house, Carl has asked how much I really wanted to go XC because getting back home after was going to be an ordeal, to say the least, especially if we didn't land together.  I was up for an adventure and thought at least I can speak the language here so how difficult can it really be?
We launched about 1:30 under beautiful clouds with about 3 or 4 paragliders playing around on the ridge.  It wasn't an easy start and after a half an hour or so of ridge soaring I was starting to think it just wasn't going to happen.  I wasn't getting more than a few hundred feet above the hill.  It pays to have a partner who is a waaaaaay better pilot than you ;-)  Carl found a lovely 500fpm climb out in front of the ridge.  I joined him there and we quickly shot up to cloudbase and over the back.  With base about 4500 feet and rising, we had plenty of height to head off into the taller hills.  With an up to 20km tailwind at times, it was easy drifting across the lower hills and up to the edge of the high mountains.  I don't think we ever got below 3500 feet or so and despite the ugly looking landing fields below, I never got too nervous.  Carl talked me through every bit even though I couldn't talk back to him and went nice and slow so we could fly wingtip to wingtip most of the way.
It all seemed to go much faster than I expected and before I knew it Carl and I were climbing up beside this spectacular rocky peak with what looked a bit like the mouth of a volcano on top.  All I could do was laugh and say out loud over and over again "I can't believe we're doing this."  The coastline was in site and on an easy glide and all went totally relaxed.  No more big mountains and bad landing fields left to cross, just a smooth mellow run to the beach for some ice cream!  Amazingly, the convergence was setting up very close to the coast and we just fooled around in it forever before shooting off across the Menai Straight with a bird's eye view of the famous Menai Bridge.  The air smoothed out beautifully and we went for a long glide halfway across the Isle of Anglesey to the biggest empty field next to the village of Llanbedrgoch.  Carl landed next to me ten minutes later and we couldn't wipe the grins off our faces.  Apparently we broke the site record going just about 85km.  More importantly, Carl had the flight he has dreamed of for 19 years!

(the view coming over the mountains toward the coast - not my picture...just found it on Google Earth ;-)
Now we just had to find a way back to the car 85km (by air) from where we were.  But hey, it was just before 5pm and there was plenty of daylight left.  Carl thought a tall blond girl might have a better chance of working out some sort of way back to the car than he would, so he sent me off to the village while he carried the gliders up to the road.  My guardian angel obviously continues to watch over me because there, 400 meters or so from our field was Jane's Taxis.  This tiny little village had the biggest taxi company on the island and certainly the friendliest most amazingly helpful people.  Jane's taxi company was based out of her house and in no time I was sitting at Jane's kitchen table sharing a bottle of wine with her while we waited for the taxi driver and Carl to meet up with us.  The original plan was to take the taxi to Bangor, on the mainland, then catch a train to Oswestry, then another taxi up to launch where the car was parked.  Carl mentioned the possibility of renting a car instead though and that seemed like a much quicker and more convenient option.  Jane found a car rental place for us right there on the island that was still going to be open after we had uncorked the second bottle of wine.  But, they weren't willing to rent a car to us without a little more ID than we normally carry around in our harnesses.  Not to worry, Jane to the rescue!  This woman is amazing really - she drove us to the car rental company and rented the car for us in her name!  Unbelievable.  Jane now has an open invitation to my house absolutely anytime!
Well the rest was easy.  We got back to the car before it was too dark, had a quick pint with the Kynastons then drove back to Llanbedrgoch for our gliders.  Home by 3:30 am, still wearing our permagrins ;-)
Funny thing is, we're still not convinced we haven't died and gone to heaven.  After Wednesday's near plane crash (that's a whole other story), Carl wondered the night before if we had actually crashed his plane and this was really heaven we were living in.  For the entire 10 hour retrieve we kept joking that being dead was not too shabby at all!
This wasn't my longest flight ever, we didn't have the strongest climbs or the smoothest air, but there is something indescribably special about doing what you love most with the one you love most that made this one of the most unforgettable flights of my life.
Here are a few more shots I found on Google earth of the area we flew over.  I always thought England was lovely, but I never realized it has such spectacular mountains.  Even these pictures don't do it justice. 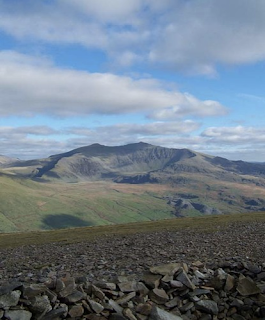 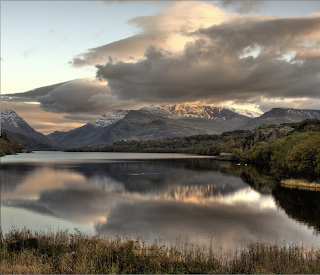 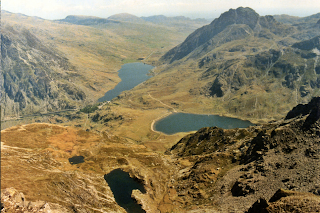 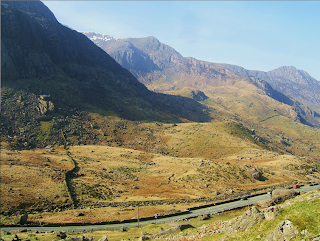 Gorgeous day at the Model Ridge yesterday.  Who says the sun never shines in the UK? ;-)  What a lovely site.  Only ridge soarable yesterday, so we couldn't really get a task off...the winner made it 11km.    Most everyone else was at the bottom landing field or a few kilometers down the road.  I was quite happy to just cruise around the hill all afternoon. 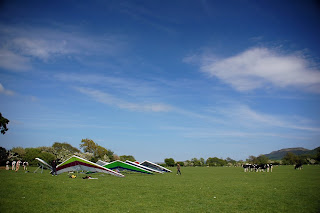 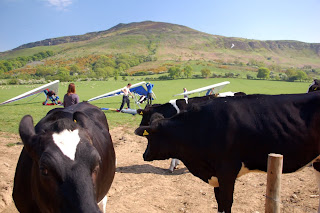 Our little house in Hawes has the nicest view. 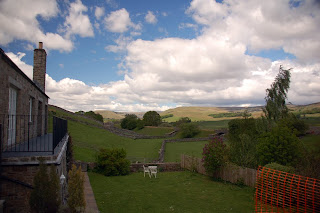 Today is rained out so Carlos and I will head back to Liverpool and get rested up for the spectacular XC days that are coming Wednesday and Thursday!
at 3:56 AM No comments: