The day called for possible thunderstorms in the afternoon, but they called a triangle hoping to avoid them.  Turns out the first leg was upwind so it was pretty tough for most.  Even well after the start, I kept hearing on the radio that they were still trying to make the first turnpoint.  I didn't think anyone would be making goal.  But apparently, once they rounded that first turnpoint things got easy.  I heard Dave May say that he glided all the way from the first to the second without taking a single climb.

Unfortunately, the overdevelopment did come about late in the task.  As Atilla was coming into goal first, there were lightning strikes north of the field.  Atilla came in fine and got his glider into the hangar as Jonny came in sky high.  I knew something must be up for Jonny to be crossing goal at 2000 ft.  Apparently he went on final needing a 10-1 but just couldn't get out of the lifting air.  He took a wide final out over the town of Gulgong to try to get out of the lift and go around the darkest parts of the sky.    Once he landed, the wind started to pick up as the gust front slowly arrived.  Konrad and Glen were next in and Konrad managed a nice landing in the 15 knot wind.  Glen flew way out over the town at about 2000 ft and we were sure he was going to run away from the storm and land elsewhere.  Turns out he was just trying to find a part of the sky that wasn't lifting.  By the time he found some and came back, the wind had really turned on.  Glen, John Smith, Wolfi and Matt landed in pretty strong stuff but everyone pulled it off alright.

Over dinner we heard that Trent made goal and then flew away trying to escape the storm.  He flew nearly back to the first turnpoint before he could find any air going down.  Cameron also had a pretty scary time trying to avoid the cloud suck. 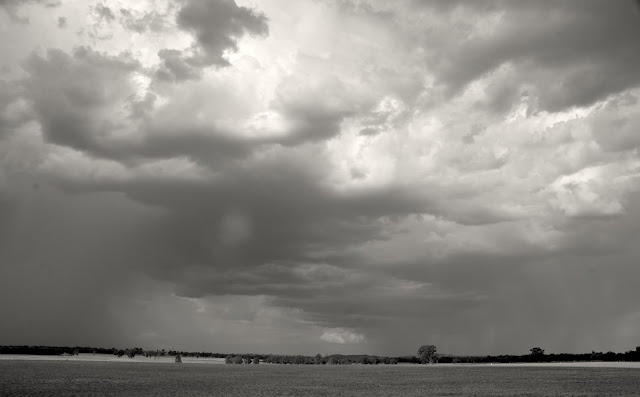 Today isn't looking terribly promising.  The storm dumped a bit of rain and it looks quite stable out there now.  The forecasts are calling for little or not lift.