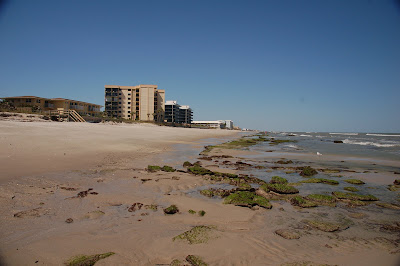 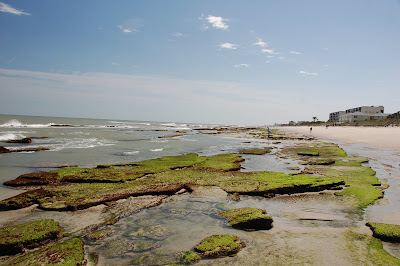 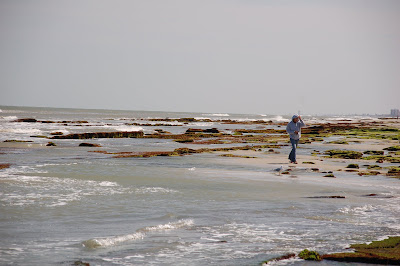 Watching the news coverage of the 2004 tsunami in the Indian Ocean, I recall seeing people out on the beach amazed that the tide was out so far, just running around taking photos and videos.  My immediate thought was "how stupid!...how can people not know that a tsunami is coming."
I came home from a ride on my new bike Saturday afternoon and went to the slider to open it up for some fresh air.  There were dozens of people out on the beach (my beach is usually fairly empty) and to my horror the tide was unbelievably, unnaturally low....so low that the rocks I've kicked a few times while wading way out into the surf were completely exposed.   Instant panic!  I ran to the television and switched to the local news channel.  I really 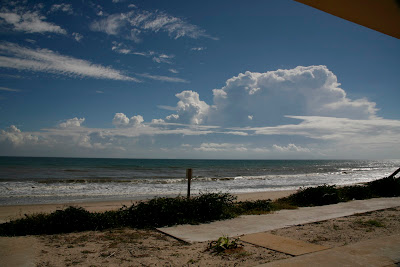 thought there was a tsunami coming and I was soon to be washed away!
Well, I feel pretty stupid now thinking back on it, but it truly was an amazing site.  Apparently this is something that has happened before, last time was back in 1993 and it is caused by very high west wind for an extended period of time (I also heard people saying it had something to go with a low pressure system that was coming through, but that didn't make much sense to me).  Unfortunately, seeing all those rocks out there makes me think I might never try to surf here again.  It is a little disturbing to see what lies just beneath those pretty waves out there.
The last phote is what my beach normally looks like.
at 7:32 PM

Poor scared blonde!! For your comfort, you did it right basing on the data you owned.

The tide that precedes a tsunami is MUCH lower than the one yo show in the pics. Looking at the photos I'd say it was just a specially spring tide (wind and/or high pressure don't affect too much to the tides, although they do to the waves).

Enjoy the low tides, oftenly you can find amazing things between the usually submerged rocks ;-).

Are you feel something in your head?

Yeah, and once the tsunami has passed, you can see almost the same people now swimming around - some still with their cameras, some without...
I wonder why that is? ;-)