I got a text message this morning from my buddy Jim saying that there was another rocket launch this morning. I ran out the door just in time to see it half way up to the clouds.

This isn't my picture...couldn't grab the camera quick enough ;-) 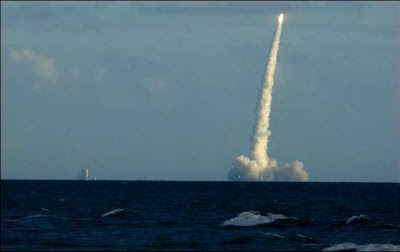 The Delta II is the launch vehicle for a new Air Force GPS satellite which will replace on old warn out one. Apparently the satellite is housed inside the nose cone of the rocket...pretty cool! The Delta II launches with a kerosine main engine and six boosters generating over 700,000 pounds of thrust! The boosters separate after about a minute when the rocket is already 10 miles up. Then just over an hour after launch, the rocket spits out the satellite and it's work is done for the day!
at 10:53 AM

Good Lord, did you get ALL that information just watching the launch?!!

I wonder what could you know about rocketery if you just touched the hull...