Rough Day at the Beach

Flying was awesome again yesterday, but the landings weren´t the greatest. The problem is that the flying is so great that you never want to land. And, unfortunately, the landing field gets smaller and smaller as the day went on. High tide was an hour later than yesterday, but it was still a few hours too early. There was very little beach left at 4pm when we all decided to land. Most of us pulled it off ok anyway, but two landed in the surf. The first one was super scary because Jack and I were the only ones there to try to pull him out....and I am already quite afraid of the waves. By the time the second one came in, nearly all of us were on the ground and so we were right there ready to pull her out. The first glider was destroyed, the second one survived, just a little wet.


Here's Jack setting up to land in ankle deep water. 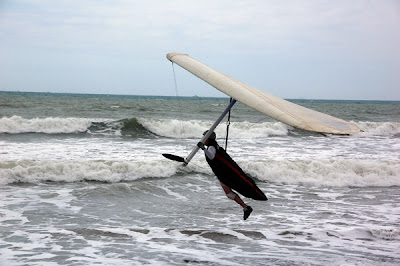