Kathryn, Jorj, Franco and I have had a great ten days leading up to the Women's Worlds in Annecy. We have mixed it up with a little flying and a little relaxing.  After Tuscany, we made our way down to Rome for Kathryn to visit her sister.  I like Rome....really old stuff, Vespas and gelato everywhere! 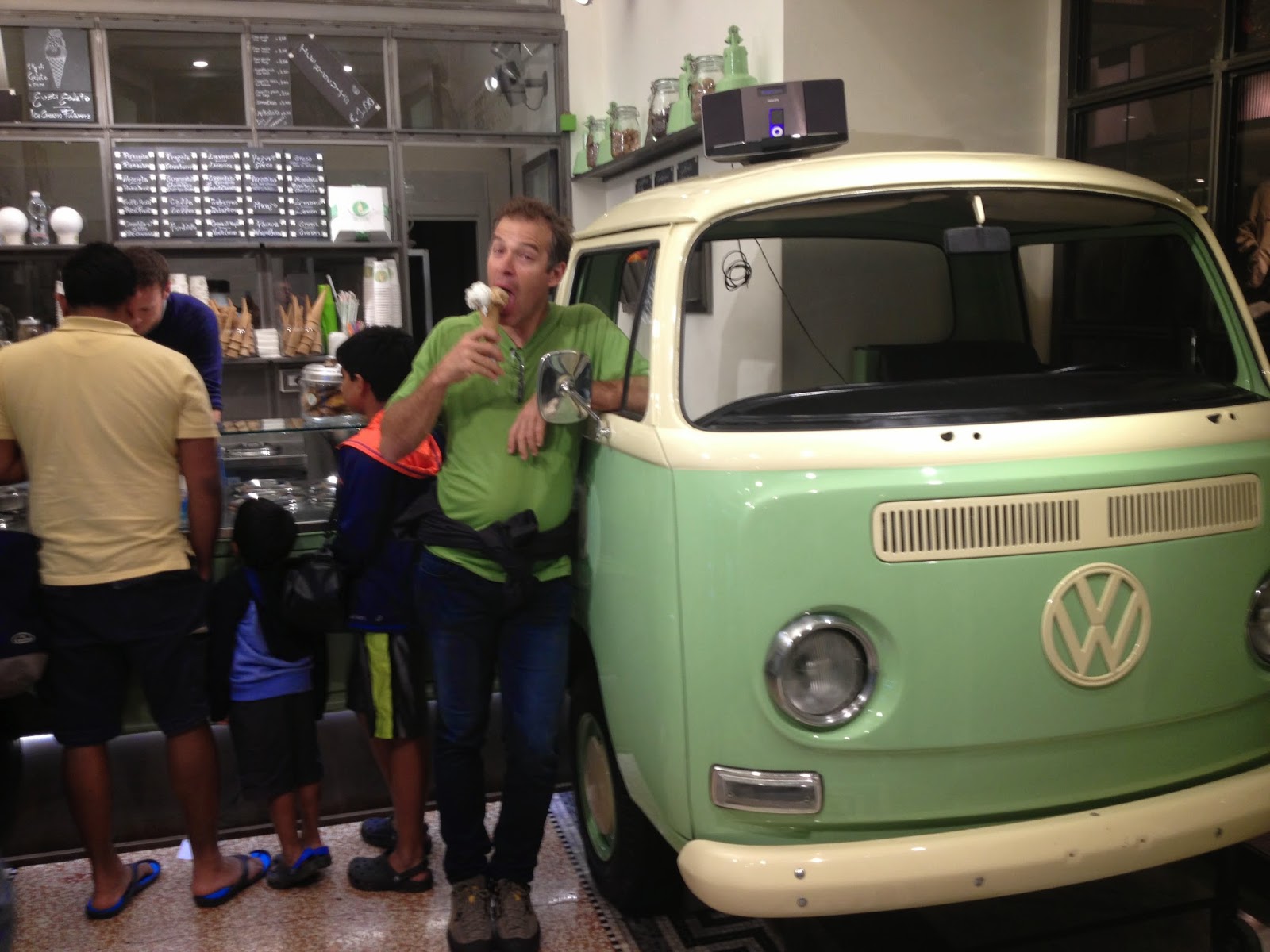 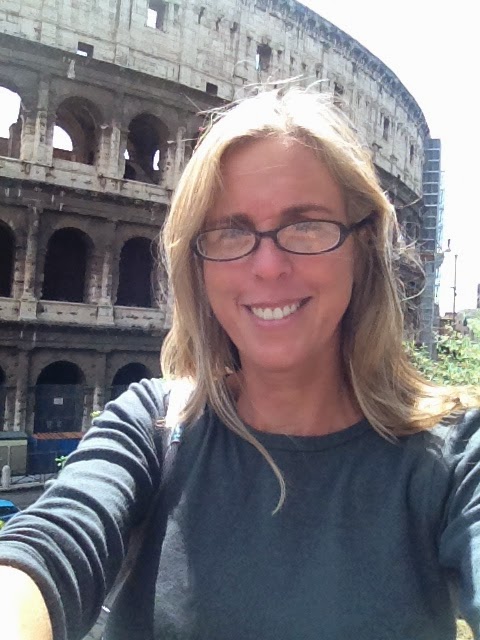 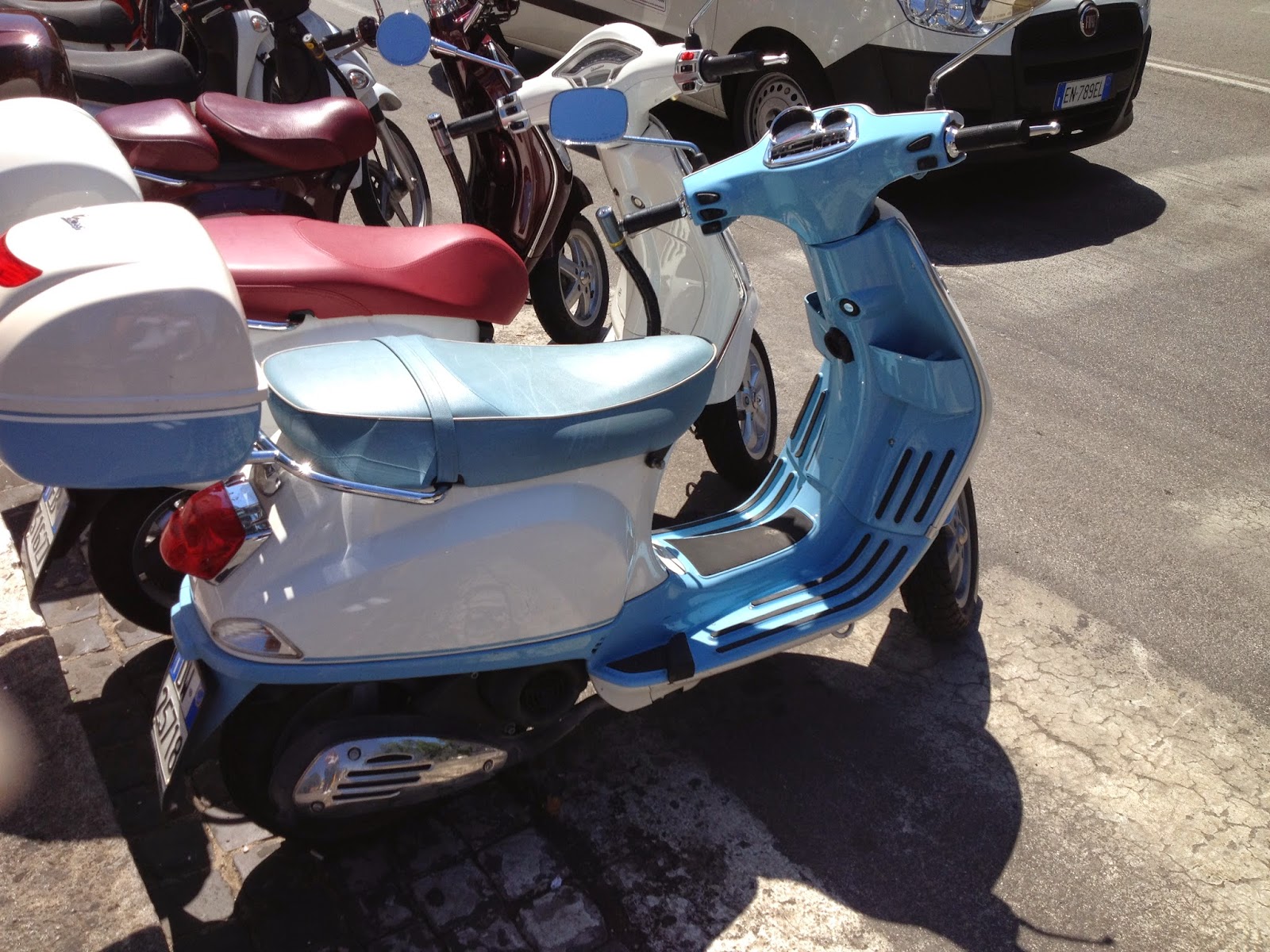 We passed through Basanno and had a nice little flight before overindulging on Sylvia's amazing buffet.  There's no more mellow place to stop for a flight if you're roaming around Italy.  Someone once told me that it's flyable there 300 days of the year.  I don't know if that's an exaggeration or not, but I don't recall ever not being able to fly there.  There's nothing epic about the flying - it's just relaxing with pleasant lift and a nice easy landing next to your hotel room and great, cheap pizzas.   It's just too easy not to stop and enjoy at least once every summer. 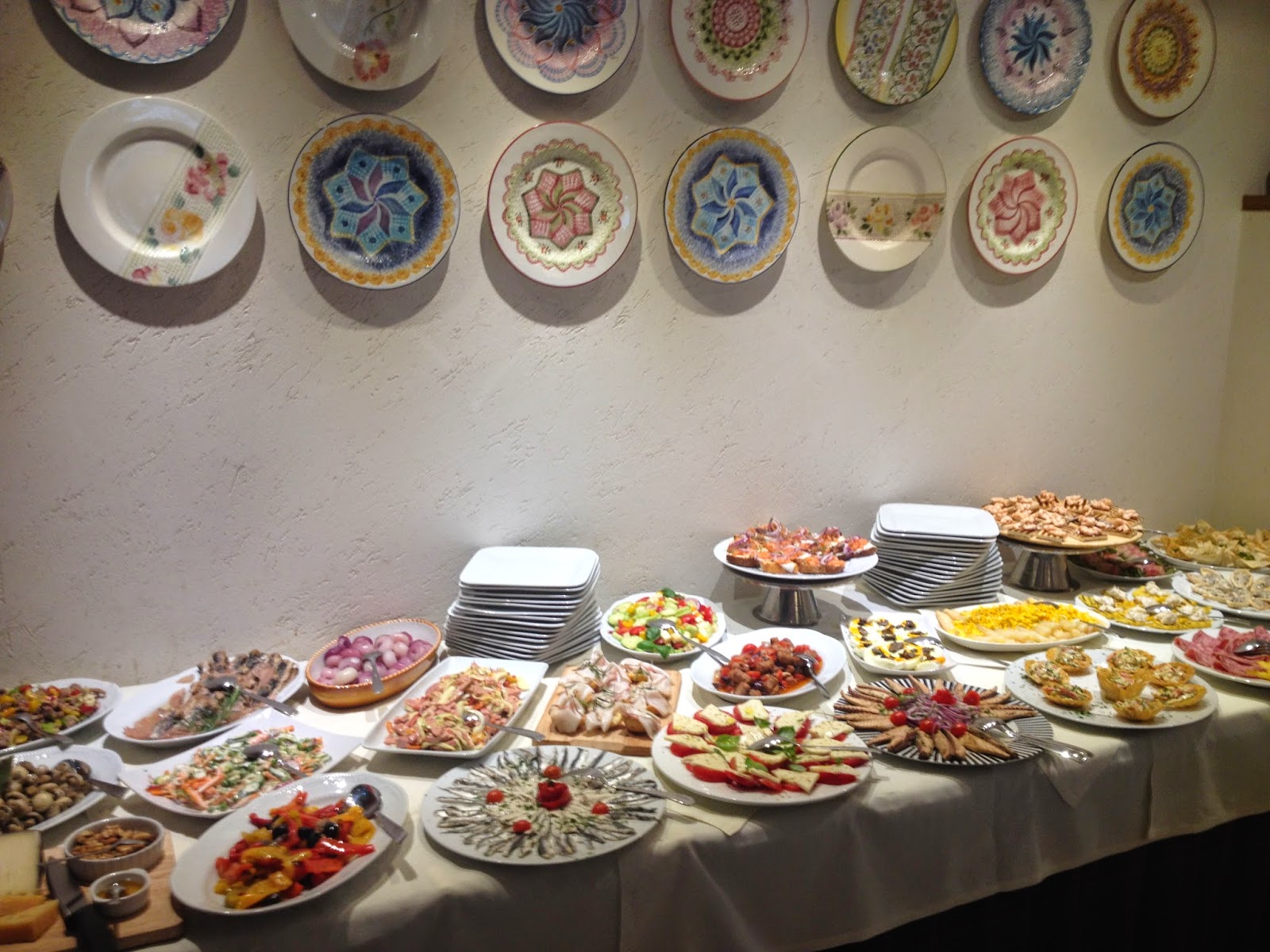 Next stop was Santa Maria Maggiore just across Lake Maggiore from the Icaro factory.  Gary Wirdnam brought Glen and I there last summer and the boys had an epic XC flight from there around the north side of the lake and back to Laveno.  We found a sweet little B&B just down from the funivia and enjoyed some more yummy northern Italian food (grits...aka polenta!) and wine and were ready for another day in the skies. 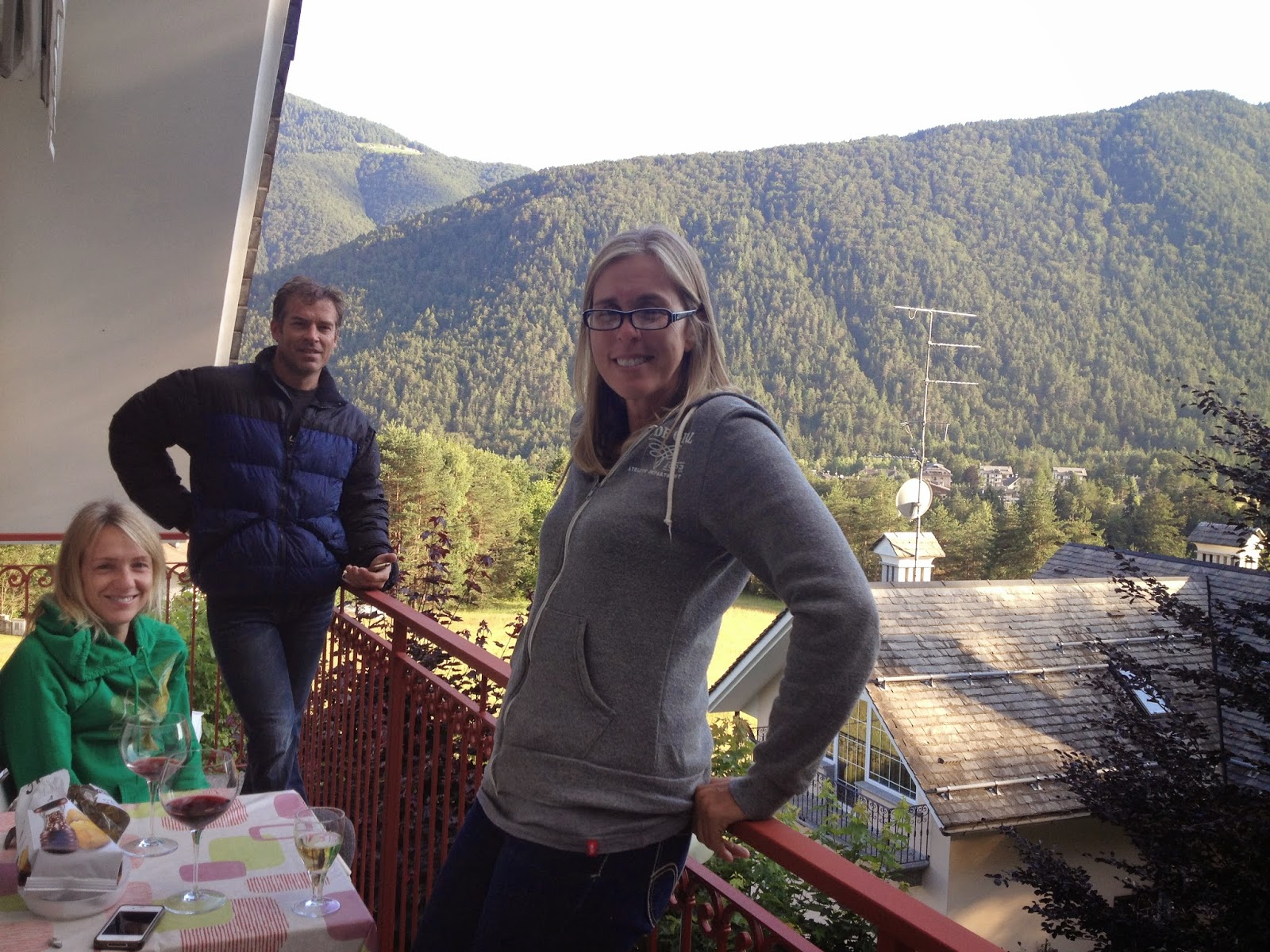 Gary says I'm a good luck charm when it comes to flying weather because we hit it perfectly again yesterday ;-).  In fact, two other Italians told me today that it was the best flying day of the year!!  The forecast was for a bit of north wind, which was a concern since we were flying in the lee-side of some pretty sizable hills.  Although it was pretty turbulent, it was worth every minute!  Despite having as many layers as as could squeeze into my harness, I froze my ass off.  Straight over this nice ramp, Gary and I climbed in 8 or 900 up until my whole body was shivering and shaking the whole glider.  I saw 10,000 ft coming on the 6030 and though "eh, I'll take it to 10 and then bugger off."  But the climb stayed to strong and nicely formed that I just couldn't leave it.  Yeah, just 11,000, then I'll leave ;-).  At 11 I my frozen fingers hurt too much so I left it, but continued climbing trying to glide away until I was nearly at 12,000 ft.  I spent the rest of the flight searching for sink to get down to an altitude that my fingers would thaw out, then right back up to freezing again.  Unbelievably fun! 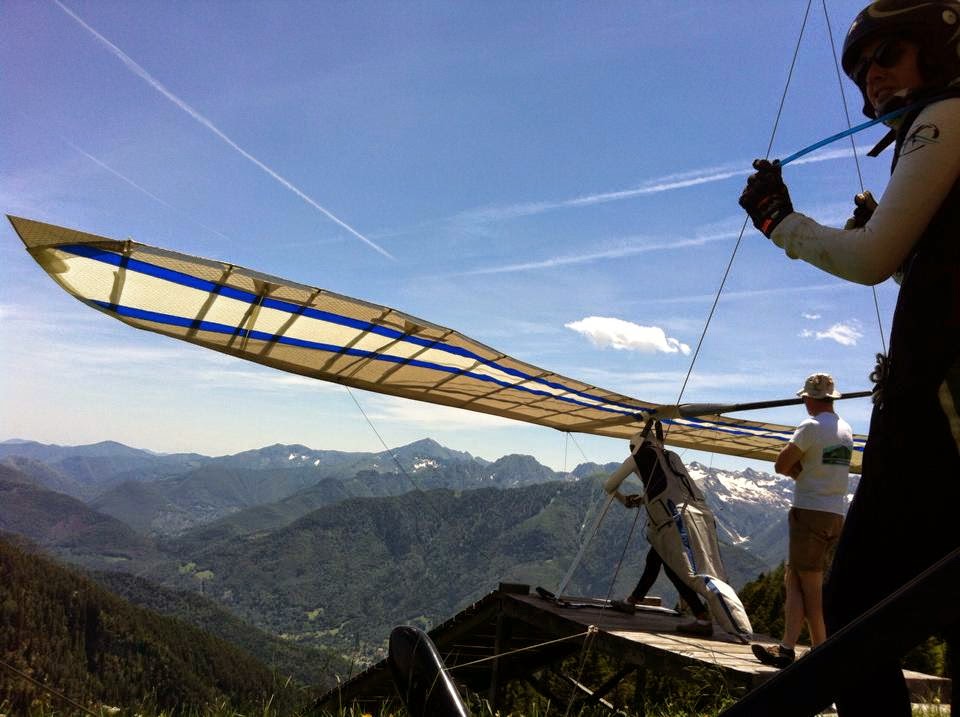 All four of us landed exhausted, but with ear to ear grins.  Franco said it was the best flight he's ever had.  He learned to paraglide 2 or 3 years ago and I think he's only flown Australia - hadn't yet seen mountains or scenery like that from above.   Pay no attention to the little hills in the background of this picture.  What lies behind them is spectacular....Monte Rose, the second highest mountain in Europe is just to the west of us and just miles and miles of gorgeous snow covered peaks. 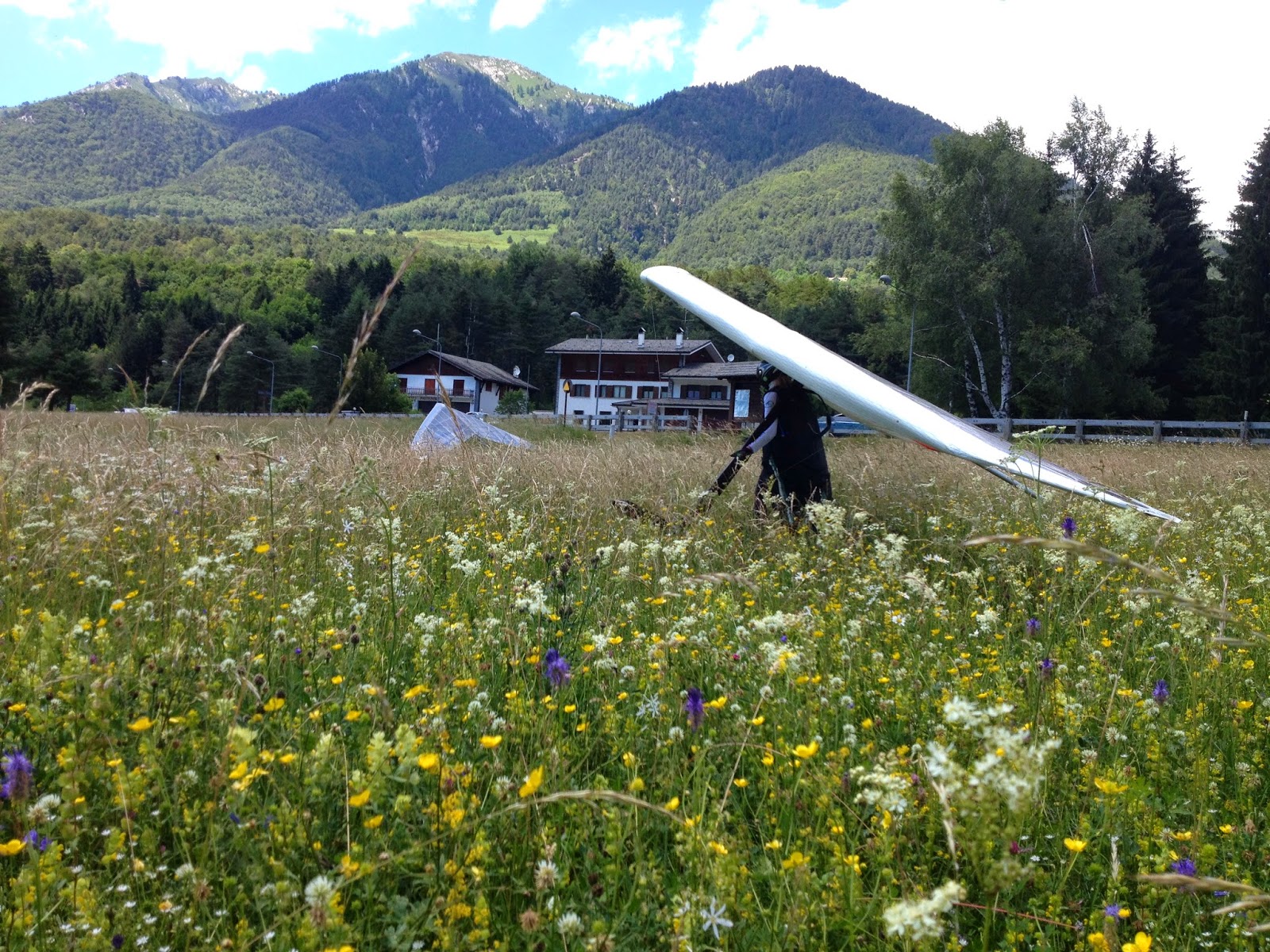 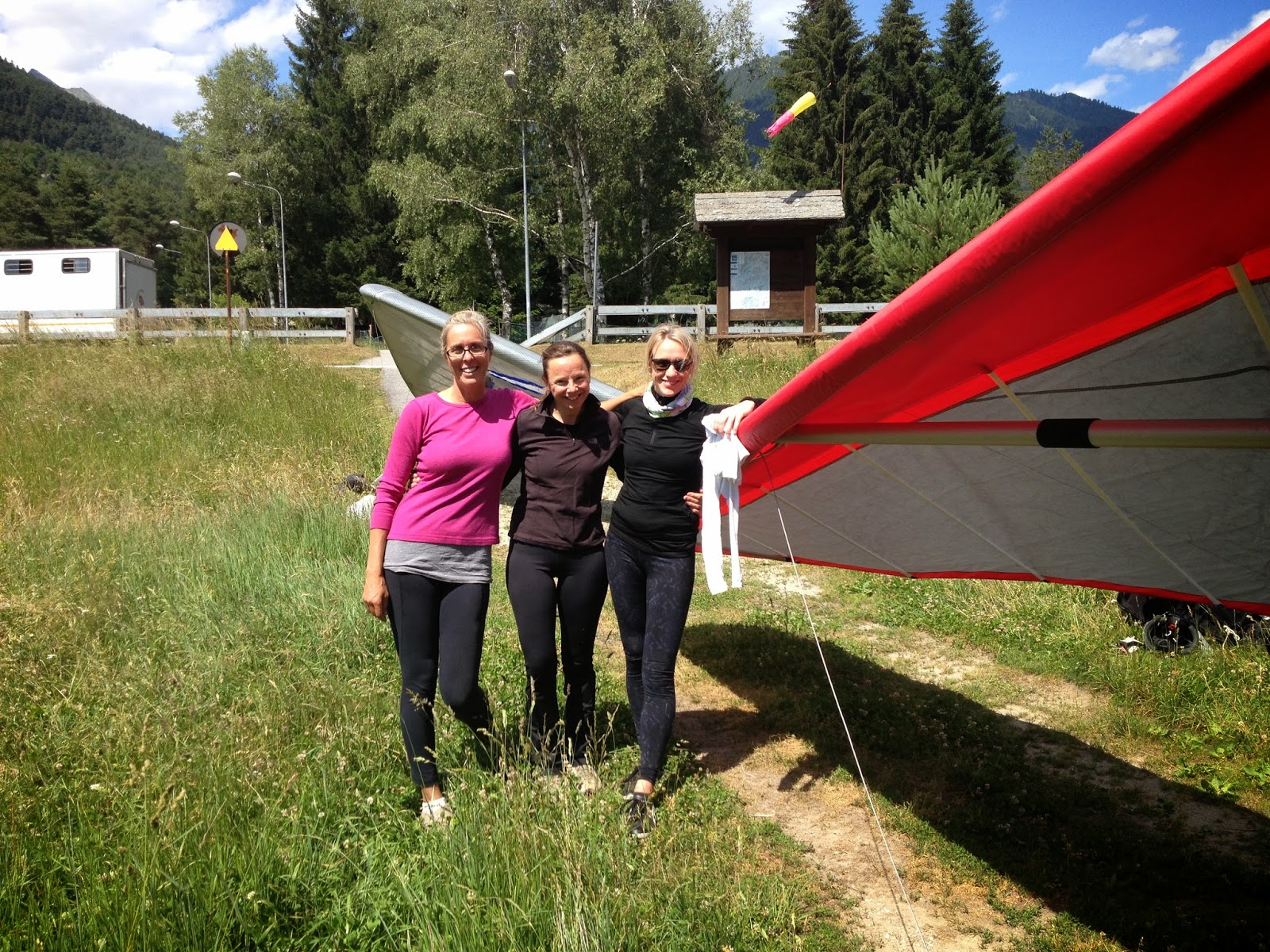 Now we're in Annecy.  We registered today and took it easy.  Tomorrow a quick practice flight and then the opening ceremonies in the evening.