Back at the Lakefront Lodge 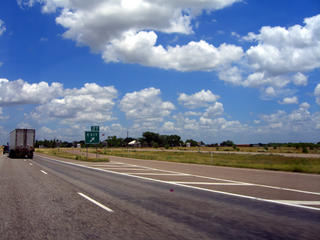 Well, we're back at the lodge after a not-so-long retrieve. Jonny went about 78 miles. Until just 5 minutes ago we thought Pete's 93 mile flight was the longest for the hang gliders. But, we just got word that Bo went somewhere around 200 miles on the Falcon!!! Nice job Bo!!!The sky looked pretty nice the first half of the day, but right around where Jonny landed it was starting to turn a bit mucky. So, he picked a nice little 5x5 meter spot to land between the mesquite bushese and I was there 15 minutes later to take him to dinner. I was able to keep up pretty well in the car because they weren't averaging more than about 30mph the whole way.There's apparently still hope for tomorrow if Emily slows up or heads a bit further south....so, we'll see! Keep your fingers crossed (or your thumbs squeezed Corinna :-)
at 10:43 PM