Three days into the Belgian Nationals and we have three tasks....ahhhh.  How nice it is!  Yesterday we had 4 in goal.  Carlos came in first about 7 minutes ahead of Mart, but having taken a 15 minute earlier start.  That gave Mart the win and the day winner's prize.

Today conditions haven't been as good.  They're on course now for a 70km task, but things were quite stable on launch and they were slow to get going.  As I sit in the goal field now there are quite a few gliders that have landed without completing the course.  Probably some are free-fliers, but several must be competitors as well.

Meanwhile, we're enjoying the sunshine and our nice little castle on the hill. 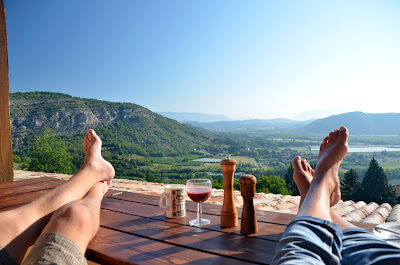