Well we thought there might be some hope of a task.  Went up the hill under mostly cloudy skies, set a short task up and down the ridge, passed out 90% of the trackers only to recollect them again five minutes later when we could see the rain across the valley toward Gubbio. 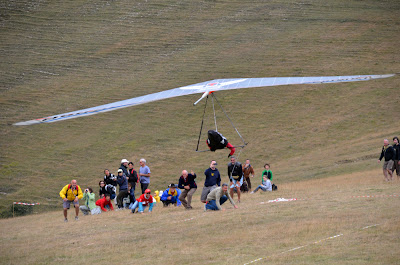 Many (probably most) flew and had a bit of fun on the ridge before the rain arrived.  A German pilot had a bit less fun, reportedly doing some aerobatics, and had to throw his chute.  It opened and he came down without injuries.  The glider appeared to be in two pieces on the ground.  It will be interesting to hear the story.
at 6:55 AM